Walk the Walk | Reflecting on the Pilgrimage to Luján

Every year, hundreds of thousands of people put on their comfiest clothes and starting with one small step, make the 60 kilometer journey on foot from Liniers to Luján. At the end, the Virgen de Luján, Argentina’s patron saint, awaits, making this the country’s biggest pilgrimage.

I am not a religious person. I’m not an atheist – I do believe in something above us, a sort of larger-than-life entity that isn’t so much concerned about where we go as individuals as it is the weaving hand behind the reality we experience. It creates the magic of identical twins or the similarity between the shape of a neuron and that of a galaxy. I can’t help but see this as proof of a directing force, a force that though we may not understand, is very clearly there. If I had to choose a name, the closest I can think of is mother nature, but even that may not be right. After all, naming something gives the illusion of understanding, and there’s quite little I understand these days.

I decided to take part in the Annual Youth Pilgrimage to Luján out of curiosity: anything that’s able to move a multitude into walking 60 km at the crack of dawn is definitely worth exploring. This was the 45th edition of the Luján Youth Pilgrimage, and every year more and more people sign up. Nowadays, the city expects the arrival of around 1.5 to 2 million believers at the doorstep of their gorgeous basilica.

People. Human souls (if you’re into that sort of thing) moving in the same direction, without disturbances and led by no particular guide (other than God, I guess?); just an endless road of walkers that disappears both in front and behind you.

I figured, why not? Let’s do this. Take me to church.

We (my friend and I) joined our fellow pilgrims at the 30 km mark. While the official walk starts in Liniers, we joined halfway in Moreno, so the slow hum of hundreds of thousands moving bodies was well underway. People had been walking since 6 AM, so while we were fresh off the bus, faces around us already looked slightly kissed by the sun, some of them resting on the sidelines with the first signs of weariness.

As we began our way to Luján, conversation naturally flowed towards the legend behind today’s activity. My friend, a born and raised Catholic, told me the story around Argentina’s patron saint. “In 1630, some rich man that lived in today’s Santiago del Estero wanted a statue of the Virgin for his chapel. On the road to delivering it, the men taking it there stopped in Luján to rest. The next day, no matter how hard they pulled, the oxen couldn’t move the cart unless the box with the 35 cm clay statue was removed. The travelers took this as a sign: the Virgin wanted to remain in Luján.

Afterwards, a woman decided to build a proper church for the Virgin away from the ‘location of the miracle.’ However, every time she took the statue it ended up reappearing in the original location on the next day. After a few times, it was settled. The Virgin wasn’t moving – this was clearly an act of God.”

Surrounded by the hum of thousands of conversations, we walk on asphalt roads that have never forgotten they were once made out of dirt. Peppered on the sidelines, millions of entrepreneurs find in the pilgrimage an opportunity to offer a variety of services, ranging from the funny to the downright hilarious. Our first encounter, 15 minutes into the walk, is a fruit stall manned by two laughing girls. “We have bananas like Castro’s,” they boast, and revel in their cleverness.

Even though I’m not Catholic, can I still say that these people need Jesus?

Ibuprofen and Tafirol are sold on the same sign that offers choripán and bondiolita. Pots of Atomo desinflamante surround a framed picture of the Virgin, almost like an altar. A man sitting at a small table, away from everyone, baffles me for a second before I see the clothes line hanging behind him with around 50 pairs of socks on display. Jesus doesn’t like blisters, and neither do we, so changing our socks to avoid moisture is of paramount importance.

Bathroom prices surge as we continue. The competition is fierce, and porta-potties are offered as five-star porcelain thrones. Houses promote their facilities with vicious marketing techniques: “The cleanest bathroom from Liniers to Luján.”

Not all is business. All along the way, good Samaritans offer us food, water, and warm tea — necessary to continuing our walk (and also, things that explain the surge in bathroom prices). These foodstuffs are provided by the most random groups of people, from religious groups (not random) to boy scout associations (kind of random) to union workers (very random). The general vibe is always the same, though: “You can do it. You can make it. You’re almost there!” The fact that we’re still 15 kilometers away doesn’t seem to play any role. A singing, jolly priest walks next to us, and the moment he surpasses us (is this what we mean when we say “Godspeed”?), we get to see a sign. “Walk lighter, leave your woes with Jesus: moveable confessional.”

As we start getting closer, the basilica’s proximity spurs religious groups into action. We see groups of priests setting up camp and creating makeshift confessionals that can take between 10 and 15 pilgrims at a time. While some still maintain the illusion of privacy and have people separated by folding screens, others have done away with these basic comforts only to replace them with what can only be called a form of religious Fordism. With priests standing one right next to the other and no more than 50 cm separating one sinner from the next, the message is clear: Jesus is in a hurry, and so are we. 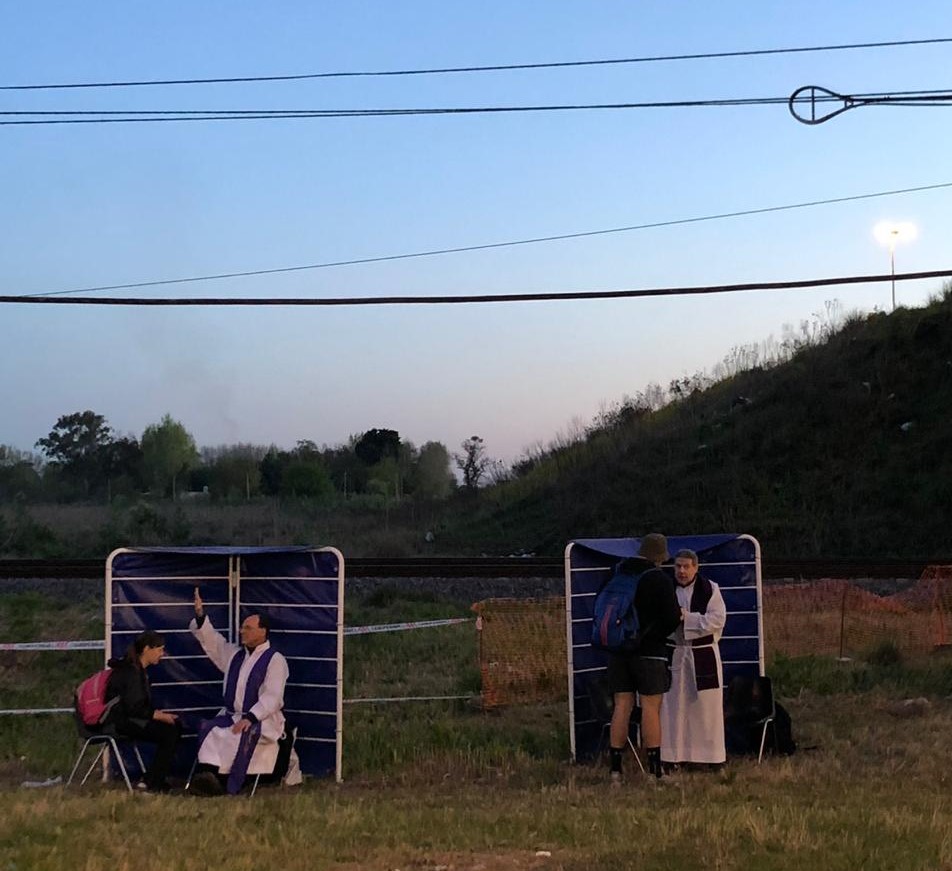 The sun is setting, but we’re still on the road. We’ve stopped talking a while back and we now just walk in amicable silence, saving our energy for the end. Once we see the University of Luján, we have only around 3 km left to walk under the cover of night. The mass around us thickens, as if this pilgrimage is a tad too many people for a single city. We briefly wonder if we’ll be able to reach our goal, the minute statue that lies amidst the 105 m tall basilica.

My friend’s energy surges while mine is long gone. My body is bone tired. The soreness in my legs has spread and has now invaded my lower back. There’s an almost symbolic feeling to this, as if my body is letting me know it’s getting harder and harder to keep me upright. The moment I see the virgin, will I bow to it out of tiredness or respect?

We’re two blocks away, and while we’re surrounded with an insane amount of people, we’ve never stopped moving. Group leaders holding signs calling upon their pilgrims surround us, and their voices get lost amidst hundreds of talks.

I cross the open gates with the very last of my strength. We’ve been silent for the last few blocks, and as we stop at the bottom of the stairs and the cold starts seeping in, my body realizes just how deep my exhaustion goes.

I break down crying. 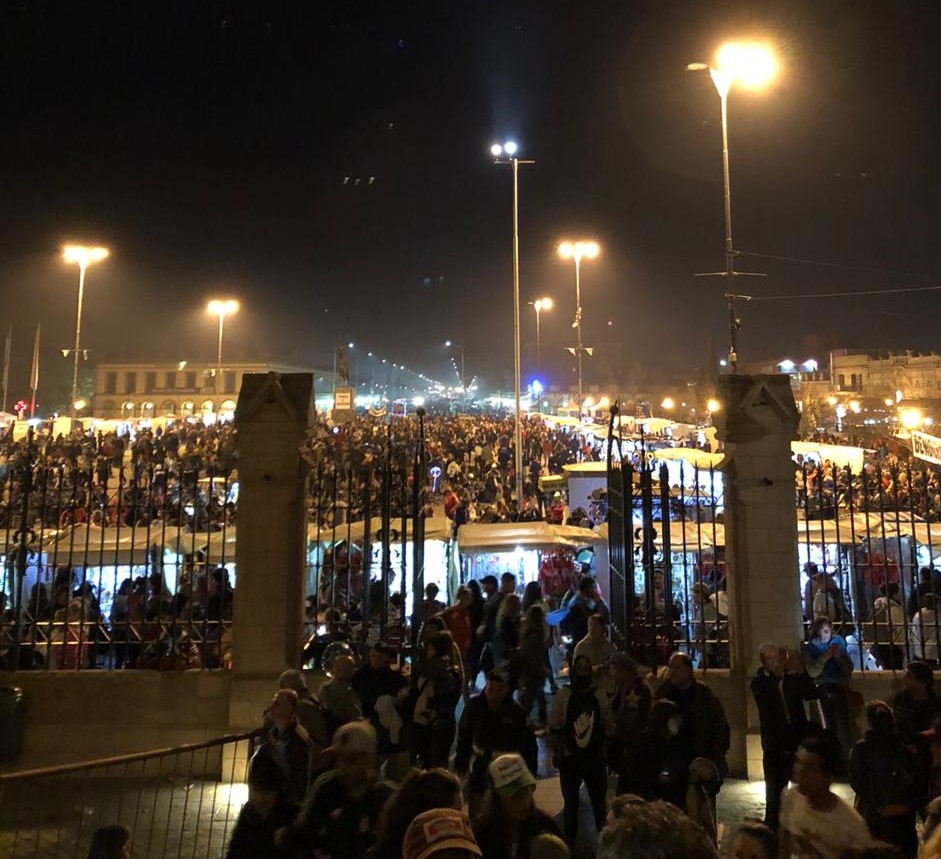 I joined the pilgrimage to Luján because I consider the world to be made up of energy. The concept of 2 million people moving towards the same goal is, at the very least, a sociological experiment, and at most, a thing of wonder. I joined as an observer, which in its very definition, made me an outsider. I wanted to see what the buzz was about.

I have a good life. I have wonderful friends, a known and cared for passion, a loving family. I also cry every week in therapy. I have wounds that have never healed and I am not sure if they ever will. I have an ex-boyfriend who left me out of the blue and quite literally broke my heart. I have a very concrete feeling hidden well within the folds of my mind about how my value lies within my ability to be useful to others.

In short, I am human.

We go through life with all the good and the bad mixed together within ourselves, coping when and how we can, trying to negotiate with our consciousness about when and where we’re allowed to let our guard down for some much needed venting. After having walked 30 kilometers surround by strangers, with the Virgin within my sight, all these barriers we keep carefully in place broke down, and with them, so did I. I had no energy left to stop my tears, as well as no good reason as to why I should. I felt deeply alone. I also felt deeply alive.

I am unsure as to what I discovered, if anything, about this event. Every year, 1.5 to 2 million people make the pilgrimage to Luján to pay their respects to Argentina’s patron saint, and in doing so, create the biggest movement of people the country sees in one sitting. The energy this moves has the power to affect anybody, and it certainly impacted me – how could it not? There’s power in the masses, regardless of the ideology that lies behind them.