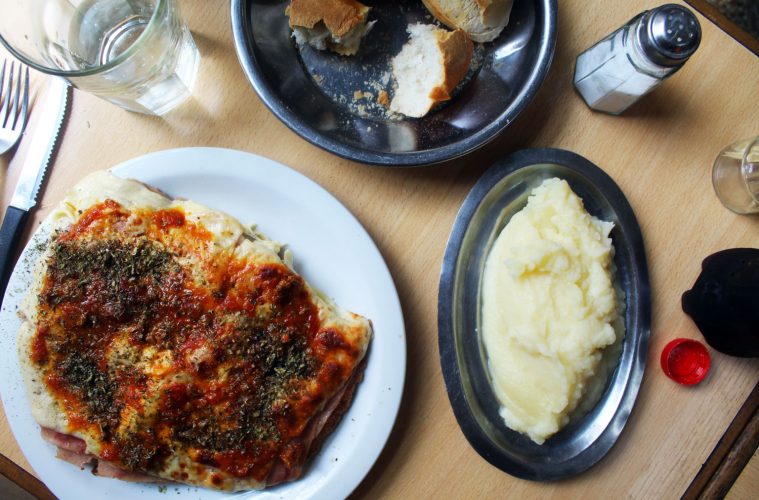 Oriente Bar is painted in delicate golden scribbles on the double windows that box in the entryway of this little neighborhood dive on an anonymous looking corner of Villa Ortúzar. Squiggly print lettering that borders on sixties psychedelia sits above childish cursive characters. Along the other windows, aperitivos, cerveza and empanadas are written with the same carefree yellow script, in varied stages of vanish, like the amber curtains that have been blanched by the intense sunlight.

Inside bright oranges the size of snowglobes and ripened bananas adorn a long mostrador waiting to be squeezed or pummelled into creamy licuados. A magazine rack offers everything from newish editions of Gente, a fishing magazine called Weekend and reprints of the mid-century comic Condorito. Plastic napkin dispensers with a 90s era pepsi logo remind me of the pizza shops of my childhood and framed photographs of patrons dancing tango hint that they likely haven’t moved tables since then.

Each day there is new plato del día, roast chicken with potatoes or hand pressed hamburgers. There is often vegetable soup, like the kind sweet mothers make when winter arrives. When the evening glow begins to creep through the windows, swap out a minuta for a plate of lime green olives and shreds of jamón crudo alongside a tall glass of Cinzano.

Many of the diners, amongst them taxi drivers taking a break, retired factory workers from the neighborhood, the occasional group of hipsters, and people waiting on their car being repaired at the shop across the street, sit down and are served without even ordering. It’s a loyalty to a place that is seen less and less in restaurants.

The Suprema Napolitana is barely contained on a single plate. Chicken breast is whacked flat, freshly breaded and cooked in the oven with salty slices of ham that burn around the edges. Cheese froths and bubbles and blackens in tiny circles and it pulls in long strings. Tomato sauce turns crimson red and is thick like a paste. A blast of dried oregano touches each and every bite. The mashed potatoes are a bit too soft, almost watery, and lacking in butter. The french fries are golden and crunchy.

The flan might paralyze you, as it did me, and make everything else in the room disappear. A plop of sweet whipped cream the size of a tennis ball is like a fog; it dissolves in the mouth almost immediately and wraps around the tongue like a sugary blanket. It is sweet but never cloyingly so. The ambrosian dessert is slick textured and as yellow as a bumblebee. It spills over with a summery caramel that tastes like honey right off the comb.

Even when the stomach is full of indulgent breaded chicken, do yourself a favor and get the flan — it’s worth becoming a regular.

Hours: Monday through Saturday 7am to 4pm