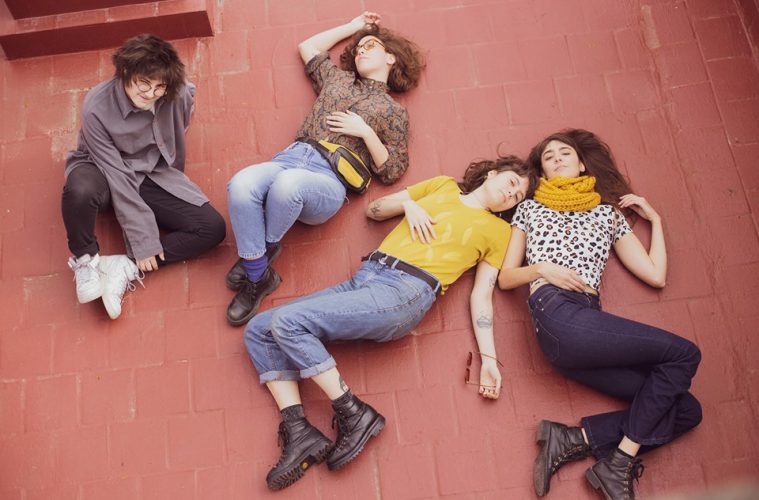 Springtime is finally here. Flowers! Moderate temperatures! Short shorts! And as nature begins to come alive, so do we at La La Lista present to you a brand new batch of songs to feast your ears with.

Perhaps the closest thing we’ve seen to a local supergroup, Ruiseñora is comprised of Lucila Pivetta on bass and vocals, both Maria Pien and Natalia Spiner on guitar and vocals, and Melanie Willams on drums. There is a certain exuberance to the freshly minted project’s first official release, “Chit’un”, released on digital platforms this past Friday. Considering the band’s roster, it’s hard to not accredit that — at least in part — to the sheer levels of talent at play here, and the obvious chemistry bringing it all together. At times anthemic and punky, at others jazzy and loose, the playful vocals and steadfast drums carry us through the song as it shifts, shedding its skin, regrowing it, and finally coiling around itself to rest.

Vos te creíste más is the latest release by seven-piece indie post-punk band Los Darwin, based in Berazetegui, with two members currently living in Spain. The second of seven tracks is “Habito,” a song that speaks of an at best tiresome, at worst torturous existence spent lost somewhere along the fine line between reality and dreams; the spiritual and material worlds. The mood reflects a sort of vapid resignation; it’s all quite monochrome but for a few bits of choicely-placed color, ending in a cry of anguish. The structure is peculiar; it’s definitely not a pop song, but each section plays a critical part in floating the listener through the dream-turned-nightmare-scape that it creates. The heavily chromatic vocal melody is carried by a layered background of shoegazey looping guitar melodies, background vocals, and vocal harmonies, that at times compliment and at times contradict it, reinforcing the abiding sensation of being caught between two worlds.

Kalanchoe, the third album by Maca Mona Mu, represents a huge leap forward for the singer-songwriter, building on the foundations of her jazz-and-folk influenced rootsy sound and applying a larger sonic palette: pop synths, stomping blues rhythms, loud rock guitars, and even gospel arrangements make their way into the album, and the thrilling “Quién Iba a Decir” is a great example of the sheer power of this release. Produced by Lucy Patané and released by Elefante en la Habitación, the album’s pedigree is as undeniable as its irresistible hooks and clever songwriting.

With Haiku, their 2nd full-length album, the Chascomús natives deliver on the promise of their two excellent singles from earlier this year. Right after the gorgeous ambient reverie of “Parte 1”, Juan Bordenave and company (gently) kick things into high gear with “Pirámide”. Equal parts experimental pop and psychedelia, this absolute gem is brimming with synth flourishes, hypnotic guitar arpeggios, and delicate, laser-sharp arrangements that only reveal themselves after repeated listen, when it’s already way too late to stop humming them. The song ends as gracefully as it began, with the band fading out in the background, as an acoustic guitar offers its last couple of chords before drifting into the ether.

Nicolás Carou, a composer and musician with orchestral flair, joins forces with the brilliant Candelaria Zamar (whose own single we loved last month), and the guy we all had a crush on in Cualca/front man of El Kuelgue, Julian Kartun. With the use of trumpets layered over a chorus that revolves around the lick, the result is a lush and groovy track that reminds us of those perfect spring songs of our youth where we gathered on balconies drinking beer. Which we recommend you do now, with this song.

One of Argentina’s most influential artists, Juana Molina has remained quite silent after the release of 2017’s somber, ominous Halo. “Paraguaya Punk” is Juana’s first single off of her upcoming EP ForFun and oh boy is it something! Though the song is literally a punk version of the Halo track “Paraguaya”, it’s a completely different beast: the song’s length has been cleaved right in half, but this doesn’t come at the expense of the original’s atmospheric quality. The track’s quick tempo, strongly plucked guitar chords, and Juana’s rapid-fire vocal delivery make this song feel like a post-punky suite that’s got us at the edge of our seats in anticipation of what this new EP might bring.

Isla Mujeres – “Yo Me Perderé”

“Yo Me Perderé”, the new track by La Plata’s indie-pop sensations Isla Mujeres, is the first sneak peek at their upcoming album. If the song’s groovy, trap-like rhythms, jutting bass, keyboard flourishes, and syncopated vocal lines are any indication, the group appears to be experimenting with elements of urban music and applying them to their characteristic multi-vocal-line, synth-forward sound. We’re excited to witness them to follow this muse wherever it may lead.