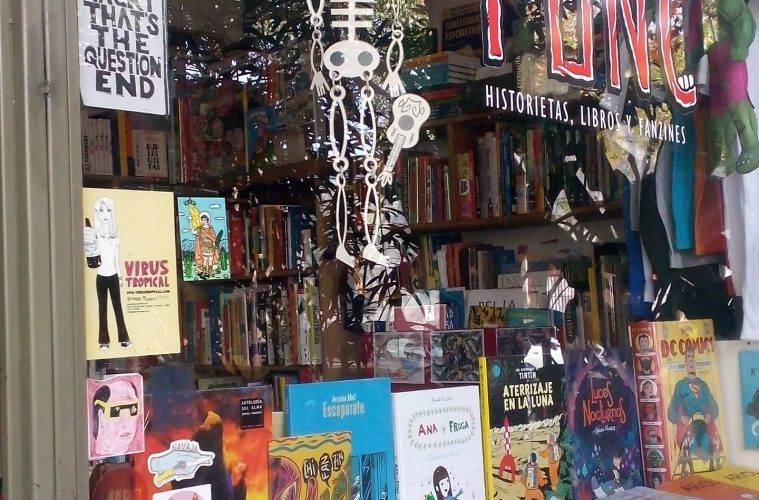 Sooner or later we were going to have to tackle the elefant in the room: What’s the point of comic recommendations if we don’t know where to find them? The majority of comic production can be found in the fair circuit and a few other locations like specialized bookstores. For this reason, we’ll make it our mission to profile bookstores and spaces where you can find the cool new releases we cover on our other articles.

This time around, I’ll tell you about my favorite comic book store in Buenos Aires. Not only was I a regular at this place, I was also fortunate enough to live nearby. I would absolutely recommend it to anyone who just has to get that lovely fanzine by that illustrator they saw on Instagram once and can’t find anywhere else.

Punc is located at Belaustegui 393, in the mystical area of Villa Crespo. It’s far enough away from the large avenues; closer to the smell of oil from auto shops than to the fashionable bagels and barbershops. And though you’d think from its spelling that the store would be pronounced like “punk”, it actually sounds closer to “poonk”. It started its operations in mid 2015, founded by Juana and Mariela. These two friends (and sisters-in-law) joined forces to start a space that featured the kind of work they enjoyed the most: illustrated children’s books, international comic books, and independent publications in fanzine format.

As Juana puts it: “We’ve had fanzines since our very beginning, because it’s one of the formats we’re interested in, just like independent books and other types of works. We found it hard to figure out how to approach them from a commercial standpoint, but we started figuring it out, and it somehow works. Often, someone won’t go to a fair, or won’t be able to find a fanzine, or they follow an author, and they just know that they can find their work here. We are a point of reference.”

Punc makes up for its small space with an excellent selection and variety of titles. There isn’t a single bit of space that isn’t occupied by a book, fanzine, original artwork, posters, indie t-shirt, or badass sticker. “Much of what we have we seek out specifically, such as the fanzines, Latin American comics, the manga we sell, old books or issues that can’t be found anymore, imported stuff”. Among its many shelves you’ll be able to find great classics of the medium as well as experimental works in both English and Spanish.

The main thing one can notice about Punc is how curated the material is; there is as much attention dedicated to large publishers as well as there is to independent material. “Many times we’ve traveled a long way by train, bus or subway to find a hard-to-get issue, or we connect with travelers who may be able to bring us stuff from outside. We move mountains, sometimes just to get a single book.”

The space also serves as a venue for activities related to the medium: meetings dedicated to the reading and discussion of comic books (led by Amadeo Gandolfo and Pablo Turnes), workshops on children’s animation (led by Razz), comic book activities for kids (led by Fer Calvi and Razz). Its walls also display original artwork. It works as a curated exhibit, or remnants of some presentation by an author that took place at the venue.

Juana points out that they’re pretty lax about their approach to events: “we don’t have an agenda, we’re not interested in making Punc into a gallery, or a constant slate of permanent events. But these presentations and workshops start popping up, in some ways because of the movement within the store. But nothing is nailed down, and that makes it so interesting things come up, like if somebody is traveling from elsewhere. If we had an agenda planned, we wouldn’t be able to accommodate that.”

“The idea is that the events aid in moving the material that is being presented, and for new people to get to see the space and maybe have a cheap beer. Like if one were to meet up with friends at a ‘chino’ and just hang out.” Who wouldn’t like that? As a regular at Punc events (and even host at one point!) I can assure you that it is the ideal environment to be exposed by great work, chat with authors, meet some great people (including the store’s owners and patrons), and dive in the deep sea of possibilities, coming away with a solid piece of work to enjoy.

So now you know: follow Punc on all its social platforms to be the first to know when an event or presentation comes up. And make sure to check out this oasis of fanzines the next time you’re taking a stroll around Villa Crespo and want to get away from the coffee shops and outlets, heading towards unknown waters..