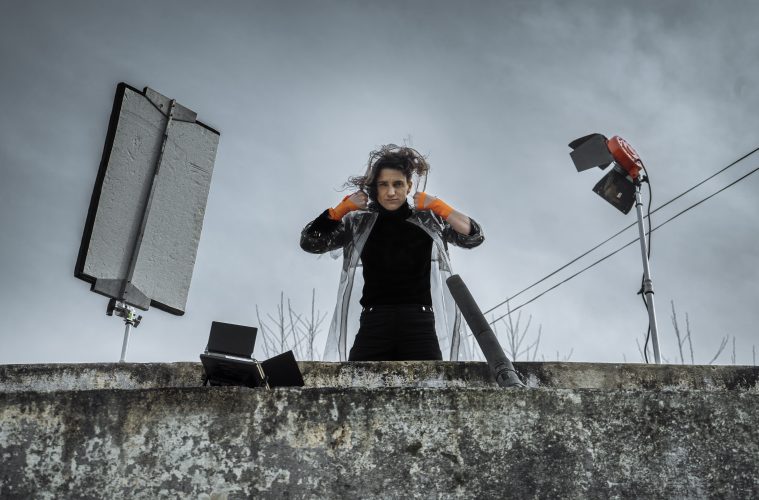 Interview | Crossing the Tempest with Solentina

Solentina is a singer-songwriter who is heavily influenced by her city and family context. Born and raised in the conurbano, she started making her own music a few years ago. She is a self-proclaimed cultural agitator who has striven to bring together a scattered art movement, producing and promoting events that include not only musicians, but poets, performers, visual artists and even workshops on feminism within the last four years.

I met Solentina in our teens and lost contact for a while. When we got back in touch, I was already a conurbano ex-pat in the city and she had become a musician. She showed me her guitar and led me to this dreamy afternoon by the river. We rode past the highway, through the houses of people who always lived by the river, to find a natural wetland landscape and rest our eyes on the sun as it set on the water. I had only heard of this place because the residents of the southern conurbano have been demonstrating against real-estate developments there. I was surprised by how much I didn’t know about the place I grew up in.

Solentina’s first album was the beginning of a powerful creative process that is moving steadily forward; to me, it is a reflection of that bike ride in Bernal. After three years’ work, she has just released her second album, En La Tempestad, featuring a powerful new sound.

How would you describe the musical scene in the Conurbano Sur in relation to Capital?

Where I live, in Quilmes, the scene is rather small, but it is less diverse in relation to Capital. Maybe all those freaky things that happen in Capital don’t have a place yet, the conurbano still needs to take a leap in this sense and overcome its conservative nature. But the music scene here is actually pretty cool, dynamic and constant. And even though we all know each other around here, the same thing happens in Capital with specific styles. If you go to a concert in Capital, you’ll see the same faces, because it’s the same musical style or the same kind of cultural product. The cultural scene in conurbano is pretty cool. There is an exchange, which is the interesting thing here, the cultural exchange between Capital, conurbano and La Plata. And that’s how you create a bigger audience, right? We have to grow our audience and also let the rest know that here in conurbano there is a large audience, rich enough for projects to come here and exchange experiences.

What is your experience as a female musician?

As a woman, the first thing that happens to you is that you realize there are less women than men in the scene. And you start wondering why. The reason is, you know, the patriarchy in the world itself, but also some micro-aggressive attitudes that have been taken as natural. I’ve come across many female colleagues who have a hard a time thinking that they are, in fact, musicians, when just about any guy playing guitar at 15 years old feels like they are a musician without question. And it seems difficult to accept our value as artists, and in that sense there is this chain of disparities that are constantly reproduced. I’ve experienced microaggressions, and have been underestimated or mocked, but there are also organizations working for visibility and change. One of them is Musicas Unidas de CABA, an organization that I was a part of in its beginnings.  Today it’s a beautiful group that advocates for our causes, though I’m not currently active.

The Bienal de Arte Joven BA is a platform for the promotion of young art hosted by the government of the City of Buenos Aires. You were shortlisted in 2017. Tell us about  your experience there.

I see my experience at the Bienal de Arte Joven as a window, an interesting showcase opportunity, a space for exchange and support. A place where the look of others helped solidify and confirm my dedication and consolidation as a musician. Sometimes it’s hard to understand why we do what we do, and these kind of institutions empower us. I feel I was in that process and that the Bienal confirmed it. And it connected me with very cool people. Also, one of the things that started in the Bienal was MUCABA. When the 5 winners where cis males, the first thing that happened is that us, the 6 women who were leading the project in the Bienal, started to exchange complicit looks. Some great bonds were born there.

When I first heard you sing, about 10 years ago in Quilmes, the first thing I thought was that you needed to meet Paula Maffia and Lucy Patané. At this point you’ve had a gig with Paula and you recorded your latest album with Lucy; how did you start working with Lucy?

Well, that was a gorgeous premonition you had. And the fact that it’s been so many years speaks to how music is work, hard work, introspective work, identity work. I think being able to work on this album from 2016 with Lucy went a long way for me. She was also working on her own album at the time, and being able to share with both Lucy and Paula, who are key artists playing right now, was quite an experience. I was lucky enough to share a gig with Paula, which was lovely. They are emerging artists in a scene that was imminently growing. This is key to me. They represent the fact that not everything has been said and done. That it’s not all dead. We are re-making it, and you simply have to take a better look.

In your first album No Quema Lo Que Enciende we find sonic landscapes and an acoustic sound. What kind of scenery can we find in En La Tempestad?

The difference between NQLQE and En La Tempestad is that the latter is a bit darker, grayer, more intense and turned inwards. It may have fire, but it is an implosion, which is different than NQLQE, which has an exterior fire, it’s more about the landscape.

En la Tempestad sounds much less acoustic than NQLQE. Tell us about the approach you took in this second album and why.

What Lucy and I decided was to give it power, rock it a bit more. Some songs we just smashed, others we tried to keep their acoustic nature like “Charcos,” the acoustic final song reminiscent of NQLQE, that has “Fogon.” Some things we planned and others were just pretty spontaneous. We did know we didn’t want to get too ambitious around getting in too many instruments, but instead to have a basic formation. The wildest thing we have is a baritone saxophone, which we felt was necessary for certain songs.. There was a lot of pre-production work we carried out, but we did improvise a lot along the way, feeling it and seeing what we could do.

Last but not least, can you recommend artists from the conurbano?

Artists from the conurbano…  A La Fresca is a wonderful band of women from Quilmes. Camila Bois, singer and guitar player from Quilmes, Desperdigadas is a girl band from Berazategui that are 21 years old and younger and sound amazing. I can mention Marina Cruz, a poet from the other south, southwest. I can also mention also Marian Komiseroff, another poet from the other conurbano. Pau Schneider, a guitarist and singer from the north conurbano. I can mention tons of artists. Mariu Serrano from the west, Ignacia Etcheverri also originally from the conurbano, all of them I can’t recommend enough. Other artists are Martin Pereira, who plays guitar in my project; Malena Cannavo, a great multi-instrumentalist; Celeste Perez Gio, a bassist; Agos Del Greco, drummer; Vivi Bertola, plastic arts; Carolina Favale, the list is never-ending.

Solentina presented her album recently in Club de Arte Tempuja, in Bernal, and Ladran Sancho in Capital, and will be opening the show at the presentation of Placard’s new album, Yendo, this Saturday September 7th in CC Matienzo.