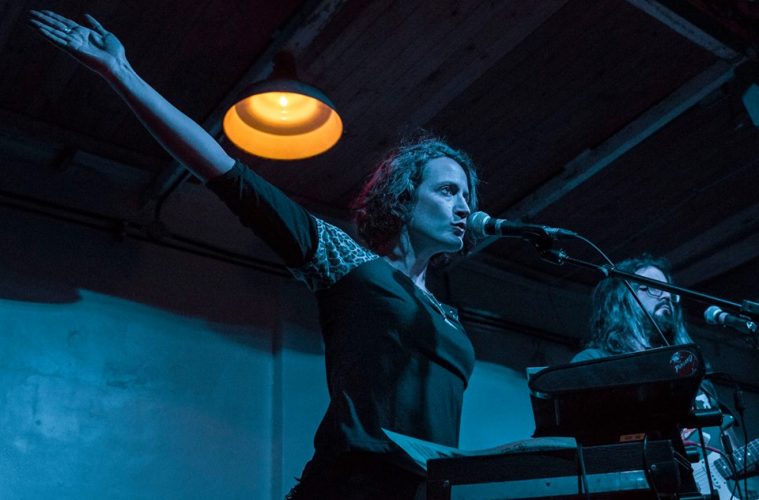 Last night I dreamed I was in a craft beer brewery in the US. I went to buy a beer and I asked the bartender, “What beers do you have?” and she said, “Well, you could get the dollar beer!” “How much is it?” I asked. She smiled and replied very matter-of-factly, “That will be one thousand pesos, please.” I looked around incredulously; I yelled out to the bar: “One thousand pesos is a dollar now?!!” Nobody acknowledged me, they just sat there sipping their IPAs like zombies, not giving a shit about the devaluation of national currencies in peripheral countries.

Anyway, the good news is that all of the events on our agenda this week cost less than a dollar beer, so get out there and enjoy some bargain live music while it lasts. Here’s our line up for this week:

The feminist festival DILDA, which usually happens on Sundays, is starting special Wednesday editions as well, which will feature a live music act and discussions on topics related to women. This Wednesday’s discussion is titled “Music in the Key of Feminism,” and will feature speakers from MIA Mujeres Incentivando Arte, Chicas Amplificadas, Eve Vega (booking agent at Xirgu Untref), and Marina Bello (independent sound engineer). After the discussion, there will be a live set performed by KAREN Pastrana and Celeste Moreno. As always, make sure to leave your toxic masculinity at home for this one, as no such attitudes will be tolerated in this space!

If you didn’t get a chance to read Jorge’s recent interview with María Pien, in which she offers us song-by-song insight into the experience of making and performing the album Afuera el sol estalla, click here now. This Thursday night at Xirgu Untref, she will be performing this album in its entirety with the full band for the very last time. If you haven’t had a chance to get out to one of the presentations that have been occurring over the last year, you have to go to this one. You just have to, okay? I promise you will flashear. In addition to a farewell for Afuera el sol estalla, the event is also a celebration of Marigrá Geranio‘s album Nunca apagar mi fuego, and the name of the event is a reference to the titles of these two works. Before we get thrown into the fires and bursting suns of the evening, there will be an opening performance by Gala Magalí.

SABOT will be presenting Non Tempus, their third album, this Thursday at La Tangente, with a show that promises to be unique. In addition to playing the new, Sabot will revisit some of their oldie-but-goodie tracks with some freshly-reworked versions of songs from Distopía Latente (2014) and Desde el desconcierto metafísico a la insatisfacción inmaterial (2017). Mermelada de Morcilla will be warming up the stage (and hopefully not leaving it too gross and sticky) with a solo set that will make you uncomfortable, make you laugh, and make you feel other things too probably.

This Friday night at Kif Bar Birreria in Palermo, Celeste y Las Mil Jarillas will be vibrating the entire southern territory through their songs in the name of Patagonia, bringing voice to the mystic and opening a portal into other times. Pop-rock band Naturalesta will also be presenting their album Reino Sonoro, so, come ready to be transported first to Celeste’s Patagonia of old, and then to the sonic kingdom of Naturalesta.

Yendo. It’s an attitude; a state of mind; an emotion. A cosmology, if you will. It’s also the name of Placard‘s third album, which will be released this weekend accompanied by a grand celebration and live performance at Club Cultural Matienzo. After their eventful tour through Mendoza, Placard, the mutant brain child of Laura Carbajal and Mike Barrenechea, returns to CC Matienzo to release the sucesor of El Disco Robado, an album representative of their resilience in the face of having had their studio robbed for all its worth. Yendo is the group’s first hi-fi album and includes Morbo y Mambo, the artists’ first collaboration with a full band. New journeys to yend on, new sounds, new attitude! Solentina will be opening the festivities with a presentation of her recent release, En la Tempestad. We hope that you will yend on out to this fantastic event!