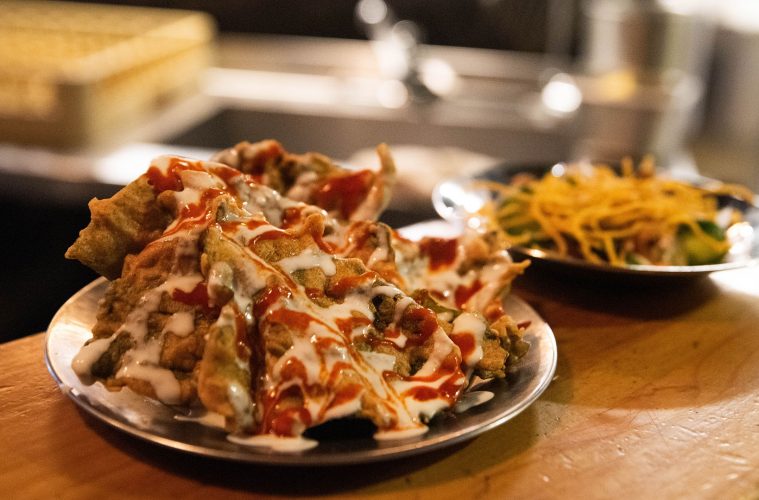 Your notions of swiss chard may have been developed in some neighborhood panaderia or at a cramped table jammed against the wall of a far-off bodegón, or maybe on a chilled winter afternoon in your grandmother’s kitchen.

But you’d be hard pressed to find something like the version over at Gran Dabbang; here, they don’t call it a buñuelo, but rather, a pakora. The inspiration is from far away India but the emotions are familiarly porteño. Wheat flour is swapped out for a chickpea batter before being precariously tossed into a deep fryer—some strands stretch outward and come out long, thin and crunchy, others stack and weave together into thick, softer bites. They are all costumed with a double dutch of homemade yogurt and mild sriracha that bounce and twist along the tongue.

It is difficult not to fall in love with Gran Dabbang, the crammed restaurant along the otherwise gastronomically anonymous Avenida Scalabrini Ortiz, which waltzes with the cooking of Southeast Asia and in particular India, fused with national ingredients and regional Argentine dishes.

Gran Dabbang marked an antes y después in the porteño approach to distant culinary traditions. While many restaurants that fall into the Southeast Asian genre attempt to imitate flavors of far off lands with blurred broad strokes, chef Mariano Ramón and his team use them like a sketch. Five years later, their influence is just beginning to peak its head around the corner in the form of ingredient forward restaurants that splice together wide reaching global tastes.

The mood is a paradoxical fusion of formal and structured. Servers who double as cooks refuse your entry until the entire party has arrived, and no more than two tables can be squeezed together whether you are a party of five or eleven. Food soars out fast, moving from the kitchen to your table in the order that it flies off the grill, meant to be shared and eaten sloppily with your hands. You quickly forget the strays from restaurant norm.

It is hard not to be enamored with an apple chutney served with goat cheese stuffed chipa the size of a small wheel, or a smokey lamb curry, bolted with cloves and lowered down to earth with a coconut chutney. Pops of fennel, cumin and black mustard seeds lash to the tongue. It is scooped up with a powdery roti—you can fight over the solo flatbread or be smart and order an extra portion. Artichokes are courageously served whole—did you know artichokes are unripened flowers?—diners yank off the petals, dip them in a nutty smoked garlic sauce and scrape off the guts with the back of their teeth.

Try the fanta orange sweet potatoes dampened with soy sauce, fried chiles and lotus root, goat ricotta and pureed pears. The mix is meant to be squished between crunchy yellow cabbage leaves. Or the burrata served with a chunky eggplant, creamy harissa and citrusy onions topped with pops of pomegranate seeds.

For wine, a rustic orange wine by Pelihueso is a fine choice, although a neutral Pinot Noir by Zorzal has a good personality without taking the attention away from the food in front of you.

Hours: Monday through Saturday from 8pm to midnight