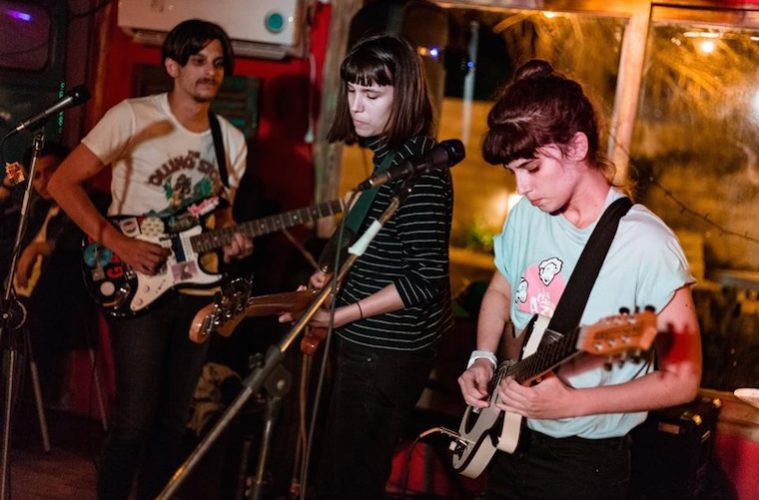 I’m baaaaaaack! After 9 weeks of illness, 4 gazillion infections, and a total of 58 days of antibiotics, I’m finally feeling well again. Remember all the sick jokes? Yeah, they stopped being funny after about 6 weeks, and I desperately high-tailed it out of winter and went to go stay with my parents for a bit. Anyway, in September I’m going to get a cool fancy sinus surgery that is supposedly going to keep me from ever again suffering this annual marathon of chronic infections. So, that means I’ll have more time and energy to go out to LIVE MUSIC events!!! And write about them!!! Yay!!! Here are this week’s recommendations:

Francisco, El Hombre, the Brazilian band that’s been captivating Latin America, will be presenting their new album Rasgacabeza at Niceto this Wednesday along with Lucy Patané, who recently sold out three shows in a row at CC Richards. The opener for this epic music event will be Paula Maffia, one of the artists on Barbi Recanati‘s label, Goza Records, and who has been selected to open for the next Patti Smith show in Argentina.

Inspired by the revolution that has welled up in the local indie scene, journalist Yumber Vera Rojas teamed up with Niceto to create the Indiefuertes ciclo to showcase emerging artists within the scene. This Thursday, the ciclo will present Las Bermudas, a melodic dream-pop group whose sound hails from a desolate world of palm trees, cement, and the comics that inspire this fantasy world; and the bedroomy sounds of Maquillaje (Florencia Farías).

Instrumento Óptico is an immersive, multi-sensory experience, where musical performance and technology (including octophonic audio, 3D projected visuals, and augmented reality) come together in experimentation to service a work of art governed by music. It’s a portal to a new world where catharsis is explored through the construction of an apocalypse that will give way to a rebirth and reconnection with nature and the Great Spirit. Each show is a unique and unrepeatable event with a chameleonic capacity that seeks to be transferred as a message to its audience. Welp, sounds interesting as all heck.

It’s our pleasure to announce the third edition of GIRLS ATTACK, a festival dedicated to the feminine energy of psychedelic trance, presenting DJs of all its formats, from progressive to high tech. This time the party will feature two dance floors, one upstairs and one downstair, and a total of 10 psytrance DJs, all women, representing the crème de la crème of the Porteño electronic music underground.

This Saturday at Ladran Sancho, you can register to join the non-exclusive low-fi club of Javi Punga (of Las Bermudas and Los Playa Grande), witness indie post-punk-garage-rockers Pulover , and discover one of the lesser known wonders of the world, post-punk-rockers Pyramides.

After several months of absence, this Saturday, Srta. trueno negro and Antolín return to the stage. Srta. trueno negro brings us music to the tune of rusted and split steel; hymns reminiscent of a resort town almost in season, and Antolín (this time accompanied by his band) will play some songs in the vein of self-help, life planning, and romanticism for beginners.

For this 8th edition of the multicultural event, Ójulo Fest, we are drawing inspiration from the varieté show aesthetic. The show will involve acoustic music sets, live painting, musical theater interventions, and art raffle, visual expo and ferias. Performing artists include: Calu Roots, Crisá/ida, Dino Severino as “Dr. Macabro,” Morel, and EKT, and artists exhibiting their work include: Alter Ivo, Emanuel Castillo and Waltrom Waltronia. If you want to attend the event but are unable to pay the 100 peso entrance fee, send a message to one of the organizers Clara Brisa and Sol Moäv.