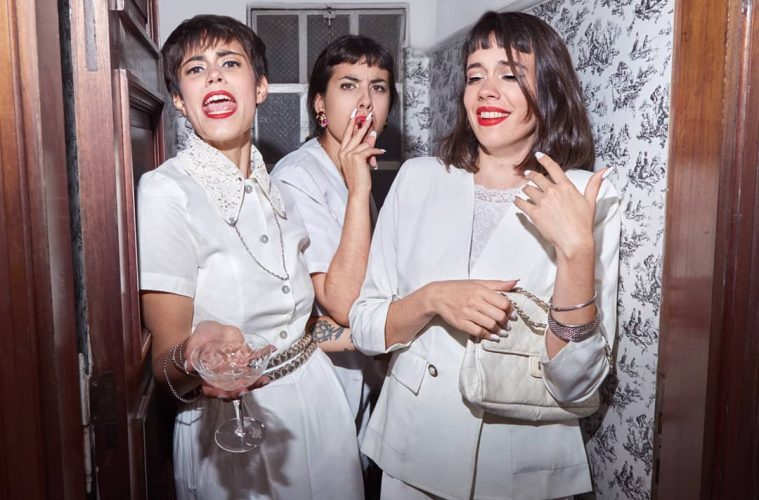 The good news is, we’ve got a whole buttload of wonderful new songs from the local scene to highlight for you. The bad news is time is an unforgiving mistress and we are all barreling rapidly towards our collective demise. But let’s try not to think about that too much. Below is our selection of great songs that were released over the last month(ish)!

“No Te Perdono,” the first single from power-trio MUGRE’s new album Gracias Por Cuidar el Equipo, only teased at the riotous infectiousness of what was to come. Its second track “Directa” opens with lyrics about cold weather, but the music — with its red-hot guitar line, piercing keyboards and gated vocals — communicates oppressive heat. A song about the anticipation of physical contact, it builds over the course of its first two minutes; when it finally breaks, it does so rapturously, as if the long-yearned-for other party is finally home. The whole album is great, but this song is an instant favorite.

When we decided to write about Fanzine’s new release Autorreferencial, we had no idea that we were getting ourselves into a shtick that, upon further investigation, appears to involve an inside joke within an inside joke. And thanks to whatever confused soul accidentally uploaded the EP to YouTube, said joke has been turned inside out for us all to enjoy. On an EP where west coast surf riffs and rhythms wrestle schizophrenically with krauty interludes, prog-y buildups, and piano parlour music, the song that stood out to us was the second track, a happy moshable pop-punk bit called “sube!” which we then were informed is not actually called “sube!” but is in fact called “Autorreferencial,” although “Autorreferencial” is listed as the fourth track in the YouTube description. “Se confundieron los pibes,” we were told. Is Fanzine making fun of us? Probably. But heck, we’re okay with it. You can’t deny, they sound pretty damn good for a band that takes not taking themselves seriously so very, very seriously.

Lucia Tacchetti’s latest gives us something synthy and sugar-coated to suck on while we wait until her next album release. Full of the same elements we loved about her album last year, this single gives us a slightly toned-down version of the electronic pop-forward beats. Urging us to always look ahead and to make sure that no one shuts us up, the chorus of “libertad te salva” fits perfectly into any movie montage of “chill party” scenes. So grab your friends, pump this song, throw your heads back, and watch as the colorful lights reflect off that artsy camera angle of your joint laughter.

Here’s a release from July that we absolutely had to highlight. From the very beginning of “Quien,” the second track from Candelaria Zamar’s excellent new album Una Linterna, you can hear a clear production path: voices carried to the very front of the mix and a melodic canon that intertwines with a keyboard, fading into a tremolo-drenched chord. The bass and drums playfully carry the groove, and minimalistic guitar lines pop up throughout, providing a lovely swagger to the track. Candelaria’s delicate harmonic tinkering and melody springs the track to life. At times it feels like a real challenge to identify each voice layer that gives this song its hellishly infectious chorus. With her latest effort, she’s certainly cooked and served a 3-star Michelin recipe for a severe and glorious case of musical earworm.

Delfín’s Pescadores is one of the most peculiar and instantly-captivating albums we’ve had the pleasure of listening to in recent memory, and its almost-title-track may be the best distillation of everything we find great about it. Chock full of memorable hooks that sound like they’ve been run through a meat grinder a few times, stuttering stomping rhythms, psychedelic hazy keyboards, melodies that approach poppiness before taking sharp left turns, guitars that sound like vocals and vocals that sound like guitars. You’ll likely have to listen to it a few times to get your head around its odd contours, but you’ll enjoy every second of it.

In “Naturaleza Muerta (Still Life)”, the title track off of their sophomore effort, the trio is anything but still. In addition to the shoegaze-y vibes the group is known for, YMO-style sequencers and synths are thrown into the mix to add some texture and depth. The guitars are crunchy and woozy, the bass follows the kick drum with scalpel like precision, and a no-frills, straightforward motorik beat serves as the backbone of this absolute banger.

The duo from Chascomus is back with yet another hazy ripper of a tune that straddles the line between throwback and fresh. It all kicks off with a couple measures of chirping synth, a psychedelic sprinkler in the summer garden grown around the Television-esque jangle of the guitars and the spartan electronic drum beat. Just as the song settles into its groove, Juan José Bordenave’s voice illuminates its soul, refracting the melody in a prism of light and harmony. More, please.

Is it weird to pick a song by one of our own staffers as a monthly music highlight? Well, not if it’s a sincere pick (it is), and not if she’s not writing this (she’s not). The latest EP by singer-songwriter Emily And was recorded over a single day during a brief, health-precipitated sojourn back to her home country. While she was working on an album back in Buenos Aires, the whirlwind of emotion surrounding this trip resulted in ups! no pude aguantar la manija, an off-the-cuff 5-song EP that switches back and forth between English and Spanish and provides a quick peek into the mind-state of an emotional exile. Always an expert at placing the listener within her head and heart, the entire album works as a singular mood-piece, and it is the opening track “la intimidad(a)” that hooks us and reels us in for the ride.