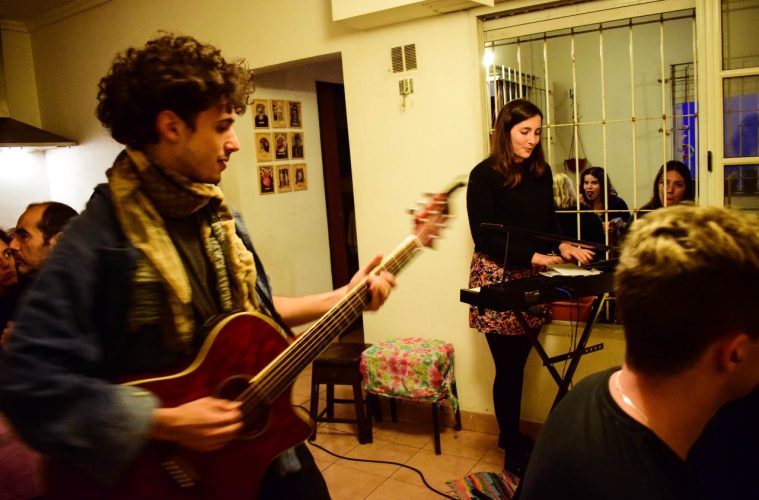 These recent years, I’ve allowed myself to be swallowed up by the eclectic beast that is the musical underbelly of Buenos Aires. And if there’s one remark I can make it’s that the paradigm shift that the advent of streaming and globalized music has produced is inescapable. This, though, has led my curious eardrums to detect a certain sameness in sound or exploration in some musical circles.

Every once in a while, however, I find myself madly seduced by artists who find a way to make music that defies, bends and breaks the imaginary line of genre. To my surprise, both Marina Verduci (Dulsemarinita) and Tomas Porcelli (Tomi Porcelli) manage to show a different side of the Lovecraftian behemoth that is Argentina’s independent music scene.

Tomi Porcelli has two album/EP releases under his belt: Cada Vez que Volvía del Lago and IR, both released last year. Dulsemarinita released her debut album Del Museo de los Monstruos this year. Both of them sat down with me to discuss the collaborative nature of their musical environment, the driving forces behind their recent records, and much more.

From Museum to Mausoleum

Though the title of this piece may sound like a page taken off a post-punk-driven teenage secret diary, the first thing I noticed when I heard the music that these Boedonians so expertly create was a certain playfulness amidst the chaos that their high-flying concept albums delve into. 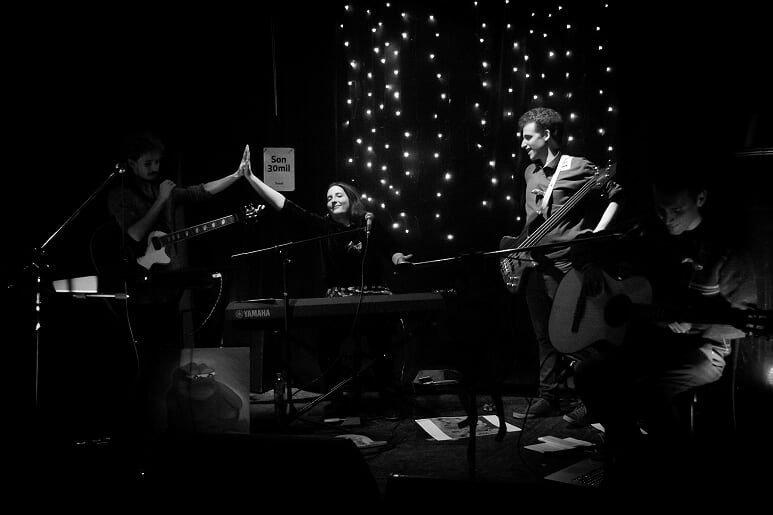 The soft but hurried voice of Dulsemarinita (a personification of Marina Verduci’s cathartic self) greets us, welcoming us to a secret location where monsters with wacky names and qualities are put on display. The album’s interludes consist of different definitions of what a monster might be, but those interludes are perhaps the least strange aspect of this album. The real meat-and-potatoes of this effort is in how, for one, the musical experimentation manages to sound like Bjork, folklore, soul, bossa nova, and/or prog rock in the span of just the first 4 songs. 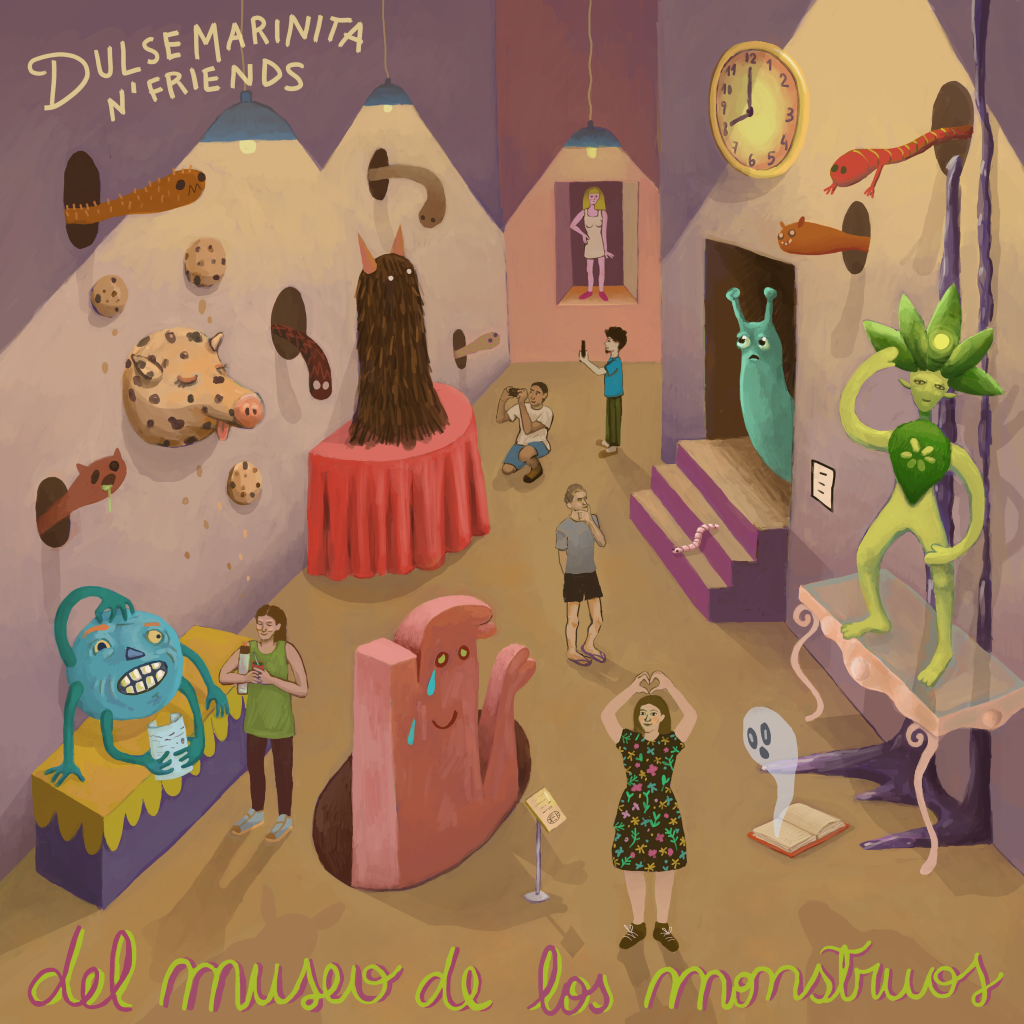 At first, this might sound like a sign of genre inconsistency. But the concept around the music is so well built that you never find yourself questioning why so many genres are able to cohabit in this museum of sugar-coated but relatable horrors, and mirrors whose reflections can leave you forever immortalized upon its walls.

It’s Inside Us, Like a Bird In Its Cage 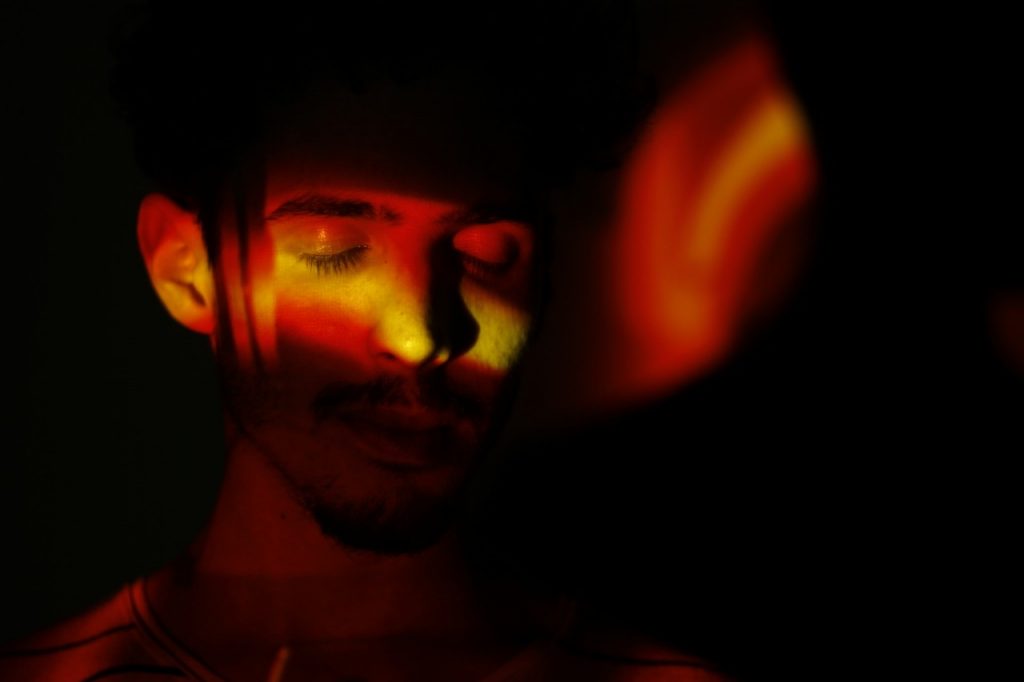 Tomi Porcelli’s IR (To Go) is an admittedly bleaker yet utterly sincere musical essay on the ways in which something as unavoidable as death can hold a plethora of meaning . From the intro right up to its final track, we are taken by the hand through a musical journey that invites us to agonize, fade and disappear into each song. A taste of what the experience of being finite can mean; a point of transition, ascension, or white waves washing over our souls. 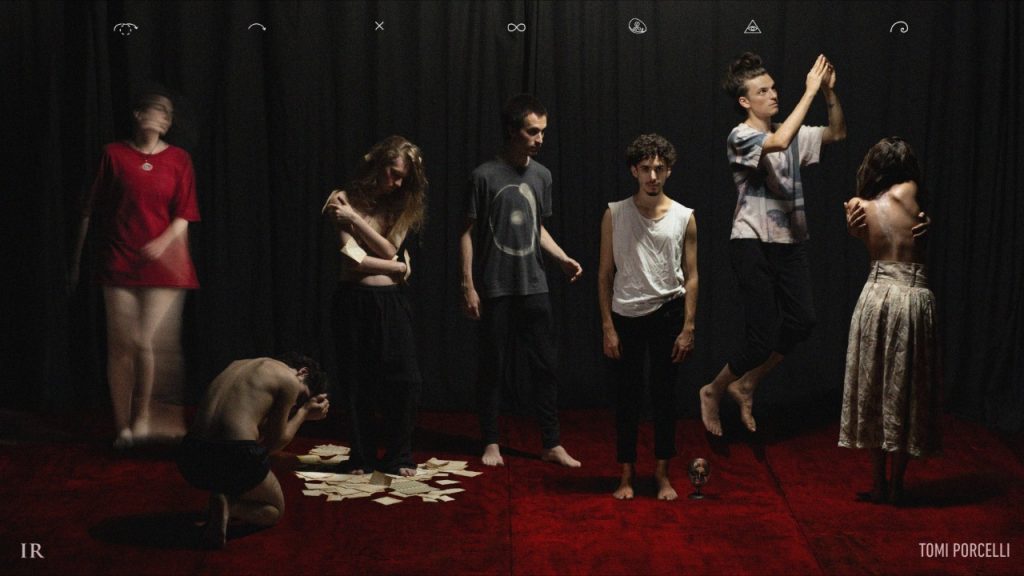 What I find strangely endearing about the tracks from IR is that Tomi Porcelli really lives by the ethos of “less is more”; you’ll rarely find songs that go beyond the 2 minute mark. This is, in his words, an exercise in getting the point of the songs across without falling into redundancy. Let’s not forget that the main theme of this effort is death, and yet I never found myself feeling gloomy or exasperated by this fact. Perhaps it’s because Tomi explores the concept as a freeing sensation, mining the exhilarating power of such a taboo concept without portraying it as a bad thing. 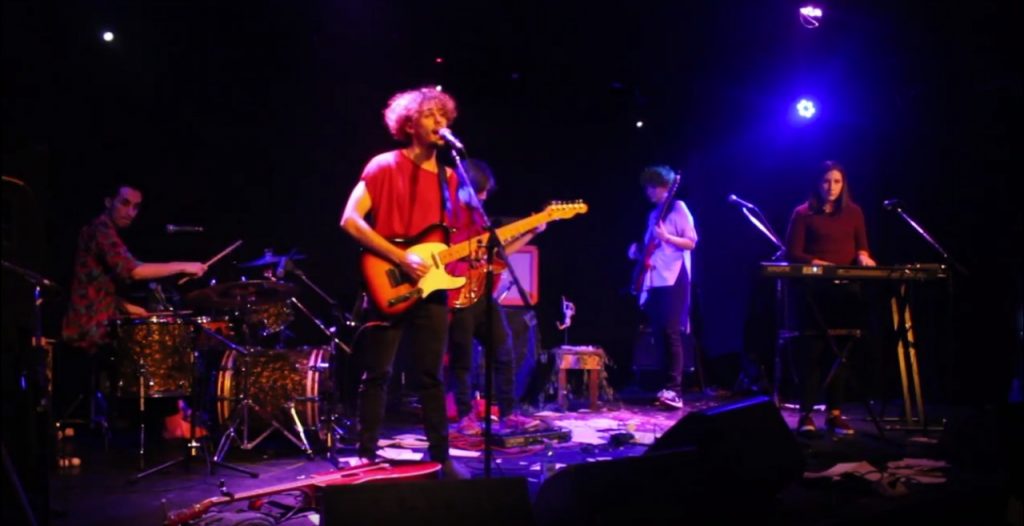 I had the extreme fortune of seeing both these artists perform live and, without getting very deep into the intricacies and details that make up their performances, I can say that another aspect they share is the theatrical aspect of their shows; Dulsemarinita talks like a kindergarten teacher, yet constantly makes snarky and jokingly confrontational comments to the audience without breaking character. Meanwhile, Tomi embodies the concept of IR in a rather poetic approach to live performance, with an almost choreographic and hypnotic set.

From The Horse’s Mouth 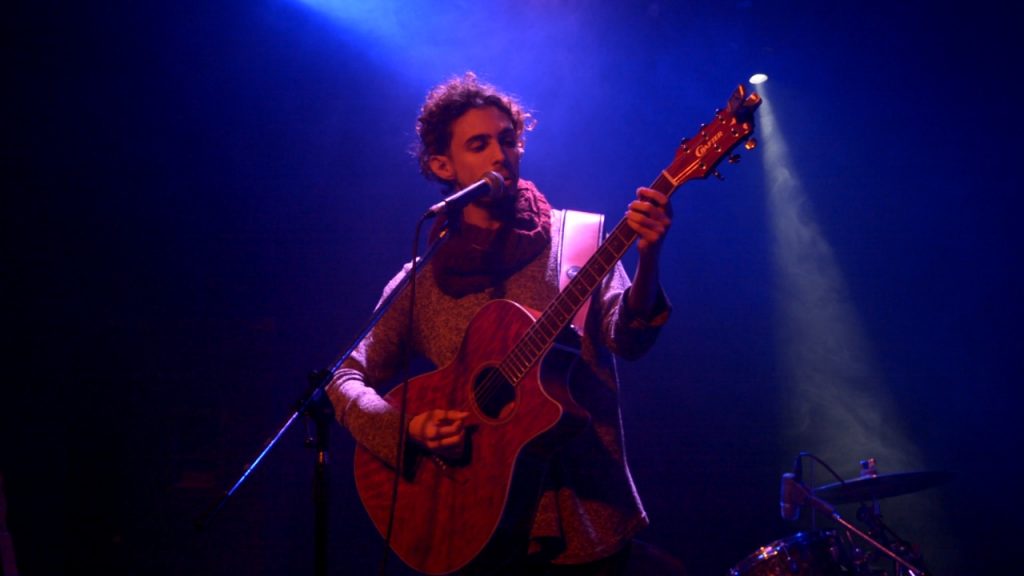 Tomi on the concept around his album:

What I was looking for was vitality as opposed to darkness. I think that when you start thinking about death, you can see life under a different light. I wanted each song to sound like what each different individual might feel that death is all about. “Un Dia Para” has an angelic tone because it’s about someone who believes in a god-like figure welcoming them into heaven. On the other hand, songs like “Olas Blancas” are seen from a point of view of someone whose soul switches bodies in a maelstrom of waves. In the end it comes down to some sort of huge on/off switch. 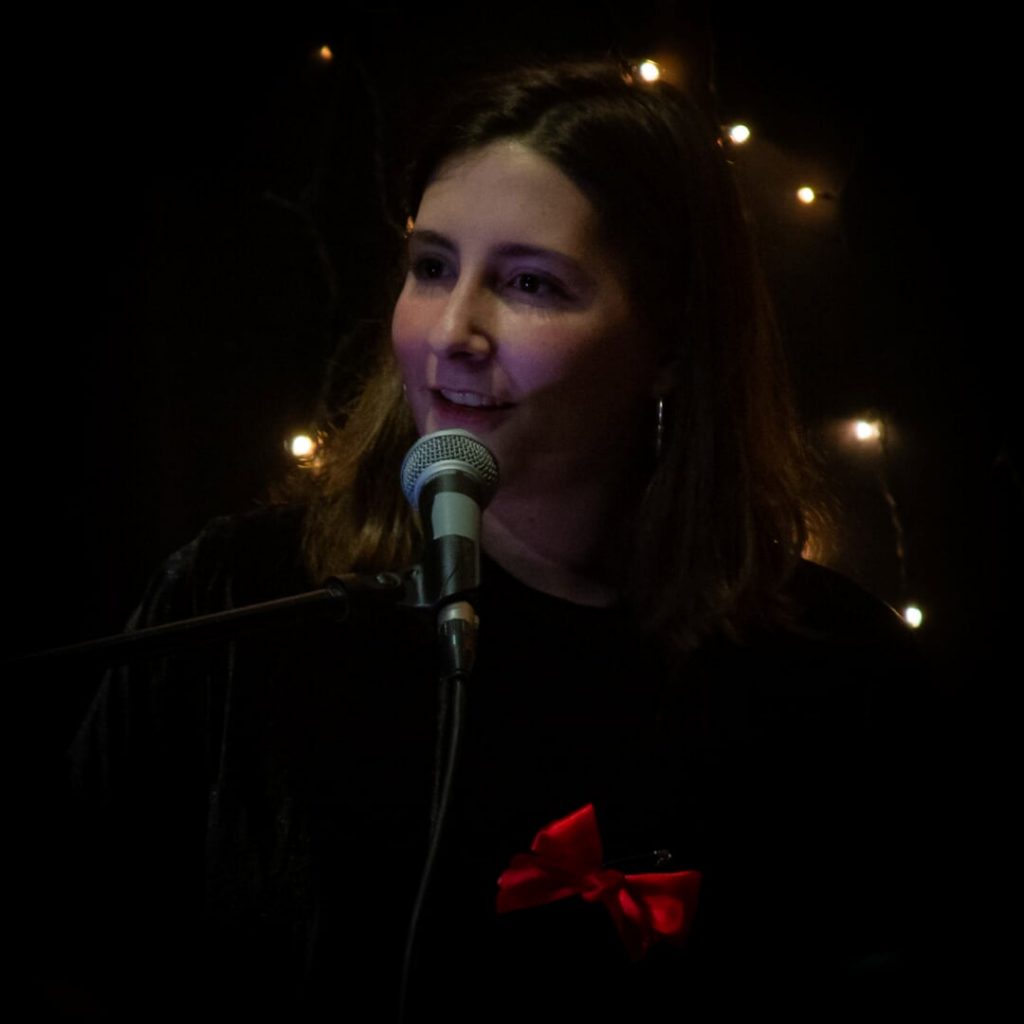 Marina on the concept around her album:

The album is a transition from Dulsemarinita into Marina; it was more of an exercise in reassurance and posturing in front of many fears: paranoia, social validation, and the pressure of academia. Songs like “La Academia” deal with the peculiarity behind the fact that so much of the academic world is ruled by ideas from people who have been dead for way too many years, new blood is rarely pumped into that world. Other songs deal with things I find personal but might resonate with other people on some level, like “Electromonstruo” which deals with the concept of anxiety-fueled hyperactivity. However, monstrousness is also something inherent to everybody and it does not necessarily have a negative connotation. Like in “Oro y Caca”, a song about learning and understanding the role and importance of others in our lives, and the challenges of not being used to showing our miseries to others. Also how our social media persona is often so incredibly far away from our rawness as humans, where our projected self is literally all golden and pretty, that when compared and contrasted with our real selves it ends up mixed with the horrid and disgusting as well.

When asked about “belonging to a scene”, both artists agreed on the fact that they do feel like there’s somewhat of a scene and following. However after talking for a solid hour with Tomi and Marina on the current state of the music scene and the classic cult of personality around musicians, I was struck by some of their statements. 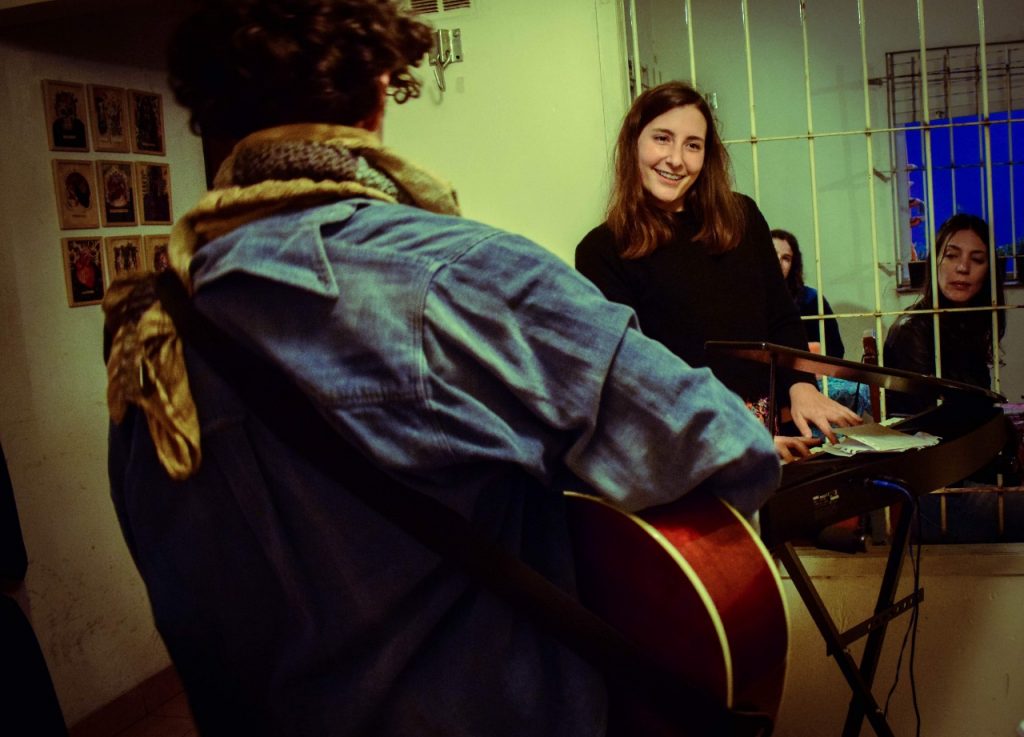 “We think that there’s a shift in our generation, no judgement is absolute. Around the circles where we enjoy playing, the individual aspect of musical projects also shifts. We often find ourselves collaborating in other people’s work all the time. Regardless of the fact that perhaps one of us might be working on a personal record, there’s never the feeling that one of us (or other musicians that we play with) will be the ones carrying any sort of flag towards the green fields of “acclaim”. That’s where the sense of community comes from and whatever definition of success that may come with that will always be authentic, precisely because it’s a shared task. This network of artists working together is what makes those artistic “scenes” grow. We are well past the times of big rock bands becoming symbols of “making it big”. It’s better to do things together and connect rather than trying to build an image that sells, especially for the type of music that we are trying to put out there.

It’s clear to see that serendipity took me down a road I’ve been before. A road where teamwork and a shared common interest is what fuels the artistic drive. It feels as if these musicians, at least those who value an artistic integrity beyond their own selves, are more focused on sparking a flame of empathy in our hearts rather than setting the world aflame in search for the holy grail of universal acclaim, and then asking where the good times went.