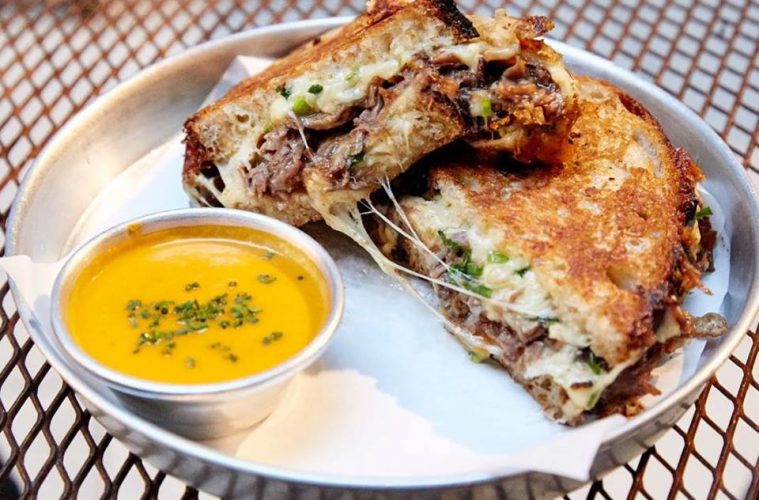 In our Dame series, resident fatty and food writer Kevin Vaughn rounds up three of his favorites for a particular theme. This week he tackles the almighty sandwich (¿sangüiche? ¿sandwiche? ¿sangüche?) because no matter how you spell it, everything tastes better between two slices of bread.

Via 71 is a neighborhood bar the size of a sneeze where a mostly male clientele packs into a dozen tables to read the paper and swap gossip. I order the same thing each time: dry cured ham and cheese with a knife of clumpy butter and a Pepsi served in a slim glass bottle. The jamón crudo has just the right balance of fat and salt and tugs and tears from the crispy french bread with a satisfying contrast of shapes and textures. Butter is haphazardly spread across the bread and arrives on your tongue like little snowballs, turning the ham’s salty fat into a slightly sweet pop. A barely noticeable cheese stands in the background waiting to be called on when needed. Check the full article here.

All your friends are in the mood for beer and grub, but those boring cheeseburgers and limp french fries drenched in an atomic sludge called cheddar ‘cheese’ isn’t doing it for you. Could Strange Brewing be the only cerveceria in the city that offers food as good as its beer? I’d wager a big fat ‘yes’, and that crowning compliment is owed largely in part to their grilled cheese osobuco. Conventional wisdom might lead you to their nachos, a disorderly tower of corn tortilla chips stacked with cheese, cream, a mess of meat reminiscent of the innards of a sloppy joe and a gooey poached egg. I tend to order them as a sort of side salad to the sandwich. Osobuco braised in a house beer mingles with a simple mix of dambo and fontina and is clapped between two slices of sourdough bread that has been zapped with a thick swab of butter and squeezed into a sandwich press. The sandwich audibly crunches and cracks under each bite–the droplets of butter and strings of elastic cheese are the stuff to make you ugly cry in the middle of the bar. It pairs well with nearly everything, from a light pils called Sentido Común to Almas Muertas, a fluffy stout with touches of vanilla and walnuts.

This is the fourth time that Belike Time‘s spicy fried chicken sandwich has appeared on these digital pages — twice as much as any other spot. So take a hint: this is quite possibly the best fried chicken sandwich in all of Buenos Aires. The sandwich is a standard arrangement of store-bought sesame seed hamburger buns, thinly shredded lettuce and a miniature lathering of mayonnaise. The basket of french fries they come served with are, without a doubt in my mind, frozen McCain potatoes. They are, despite this, awesomely crunchy and the perfect medium to shovel ketchup. On paper it is an indelicate and unremarkable meal with all the makings of the usual edible disappointments wrapped in paper and carried out on plastic lunch trays. But what the restaurant and its staff lack in enthusiasm is made up for by an energetic recipe. Check the full article here.