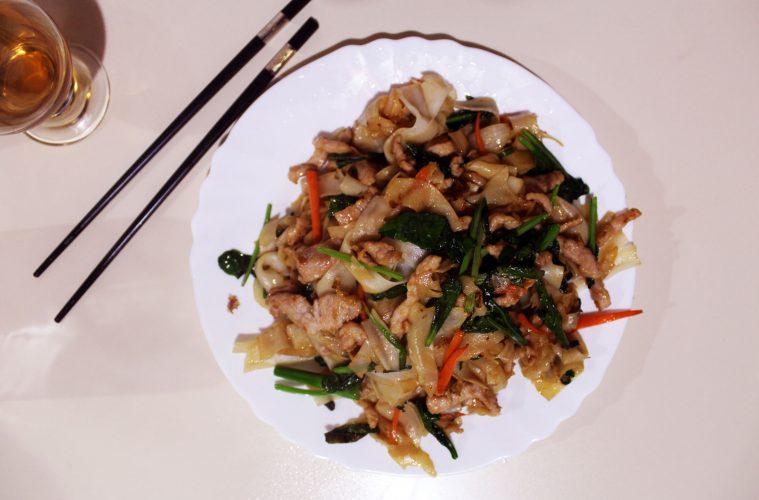 Maybe the most extraordinary thing about flipping through the menus of the hundreds of Chinese restaurants spread throughout every corner of Buenos Aires is how identical they all are. And, despite the verbosity of dishes, just how little the average Chinese eatery actually offers. A half-dozen or so types of noodles and rice that you season with your choice of meat and sauce stir-fried into oblivion. It’s a choose-your-own-adventure where every choice inevitably leads you down the same path of disappointment.

Those that go beyond the call often inadvertently camouflage themselves behind generic menu descriptions. The regional novelty of something like twice-cooked pork, or hui guo rou, one of the most ubiquitous dishes in Sichuan cuisine, is masked behind a name like panceta picante.

Hong Sichuan, a restaurant the size of a sneeze on the edge of Barrio Chino, falls into the latter category. Even if you have dined there half a dozen times, there is always something new that catches your eye—either because it got lost amongst the nearly 200 other dishes or you just had no idea what you were reading.

Head over around 9:30pm. It is suddenly bustling at 10:15 with people breaking down crab legs and coaxing out the white flesh; scooping up strips of dirt green algae in-between bites of tripe and peppered mushrooms; or slurping noodles from colossal, sweltering bowls of soup. Sichuan boiled fish, or sopa de pescado picante, sizzles still as it arrives to the table. An army of black Sichuan peppercorns and red squares of dried chile peppers float to the top of the crimson broth. They glue to the fish fillets, which are dredged in cornstarch and boiled with a flash of hot water, giving the fillets a sticky winter coat. The peppercorns are floral on the nose and numbing on the tongue.

Many of the dishes on the menu may require a long chain of translations. Like tianji, repeated frequently throughout the menu. The waitress’ eyes mimicked my own, glazed over with query; the owner repeated the word back, almost annoyed, confirming its place with the rest of our order; her husband, after much deliberation, found a picture. Frog. They are actually frog legs. But at $800 a dish, we passed. We did, however, order the spicy snails. The muddied brown color hides its delicate texture, which both pops like a grilled shrimp and chews like a crisp chinchulin. It is flavored simply with a Chinese wine and chunky jalapeño peppers.

A decidedly spicier stir-fried eggplant sprints between sweet and sour. I have tried soupier versions at nearby Li Chiangming and the Once banquet hall, Caracol de Amor. Here, an unexpected syrupy sweetness is a welcome balance to the spice that pulsates over the tongue. Fermented black beans pulverize into salty little bites. Crispy twice-baked pork belly, or panceta picante, nudges up even further the heat index. The dish swaps out the previous sweetness for a straight to the point nutty spice that forms a cloud on the back of the throat.

Pan-fried pork dumplings bring your tongue back up to earth. The glutinous dough feels like a sticky pancake fresh off the griddle. It is stuffed with gooey pork and chives. Tame chicken fried rice was porteño proofed. Thank you, next. Ban Tiao, or flat rice noodles, was a more exciting version of a toned down main. Slippery wide noodles were sautéed with just a touch of soy and soft paper thin slices of pork. A lost chop suey made its way to the table. It was meant to be char sui. A note: point and repeat the numbers to be safe. The chop suey turned out to be delightful. Long bean sprouts implode with satisfaction like popped balloon animals; they are sautéed with a rainbow of vegetables and a touch of red chile pepper. We eventually got the char-sui. Pork is barbecued, delivered tender and with just a touch of smoke; it is sliced delicately thin and served cold. Dip it in a homemade chile sauce, chunky and prepared with rendered pork fat tinted orange.

With four visits, I have barely grazed the menu. One day, I’ll saddle up to the tianji.

Open: Monday through Sunday from noon to midnight