Welcome to Ltd. Edition, La La Lista’s haven for independent comics, where we rummage through all the racks to find the freshest and most interesting morsels from the local scene, offering them up to your hungry eyes.

Despite the winter cold and the strange climate that comes with the Argentine electoral season, authors and publishers remain active, releasing new material and defying the limits of the medium. In this edition, we will be discussing three publications released this month:  “Todas las islas tienen más de cuatro partes” by Athos Pastore, “ EP (en Proceso)” by Matias Chenzo, and “Furniture Comics – Paranoid Boy long story” by Ivan Riskin. 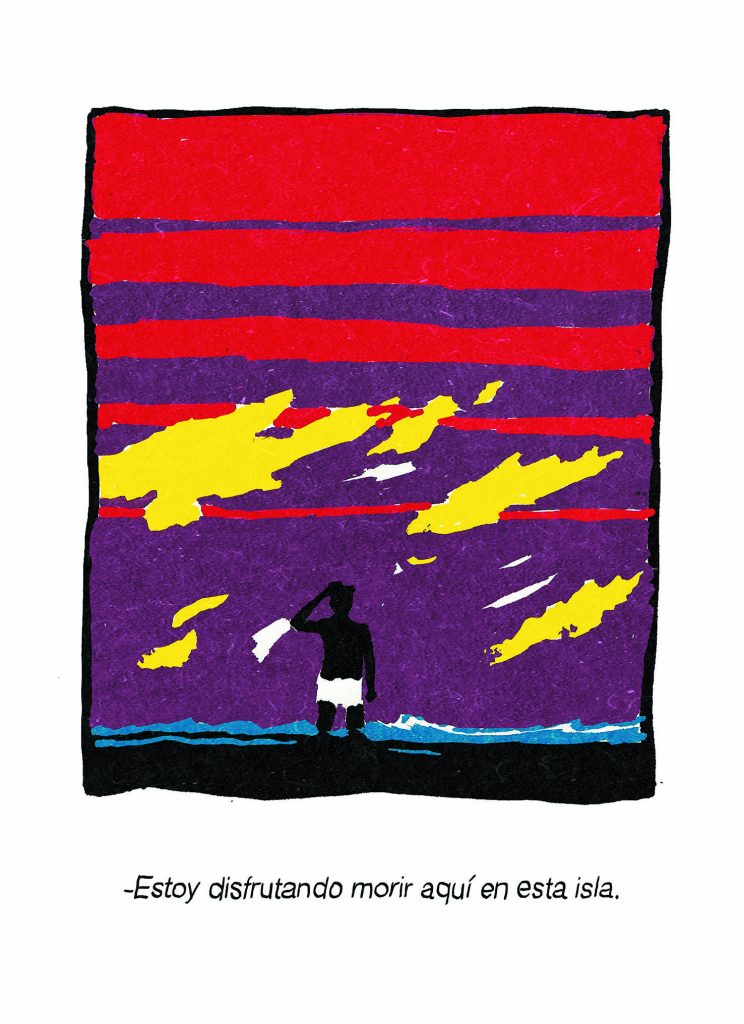 Todas las islas tienen más de cuatro partes is one of the newest releases by Deriva Ediciones, a comics publisher from Córdoba where Athos Pastore also works as a release curator. In his new publication, the illustrator evokes an island paracosmos through a series of illustrations accompanied by surreal, almost dreamlike text.

The title is a play on words: there are 4 colors that make up the palette of every page. It’s in the way that Athos Pastore plays with the proportions, the overlap and interaction of violet, red, blue and yellow where you can truly see how the result is greater than the sum of its parts, specifically in how they are used to reproduce the same scene by modifying the chromatic values. The reader experience is as mysterious as it is gratifying; the abstract shapes start to form the landscape, geography starts to take shape, and so does the presence of the lives and deaths occuring within these spaces.

This publication is, in a way, a decanting of the author’s experience while traveling to the Balearic Islands (Mallorca) in search of his family’s roots. But, in opposition to what we would usually expect from the well-worn clichés of travel stories, Todas las islas… is not a travel log in the strictest sense. Instead, it combines poetry, family history, and long hours of the sensorial absorption of one’s surroundings, presenting it all as a poetic mosaic which results in a stunning work of allegorical fiction. The final product is an evocative and often dream-like story, as gorgeous as observing the sky’s colors changing over the horizon line. 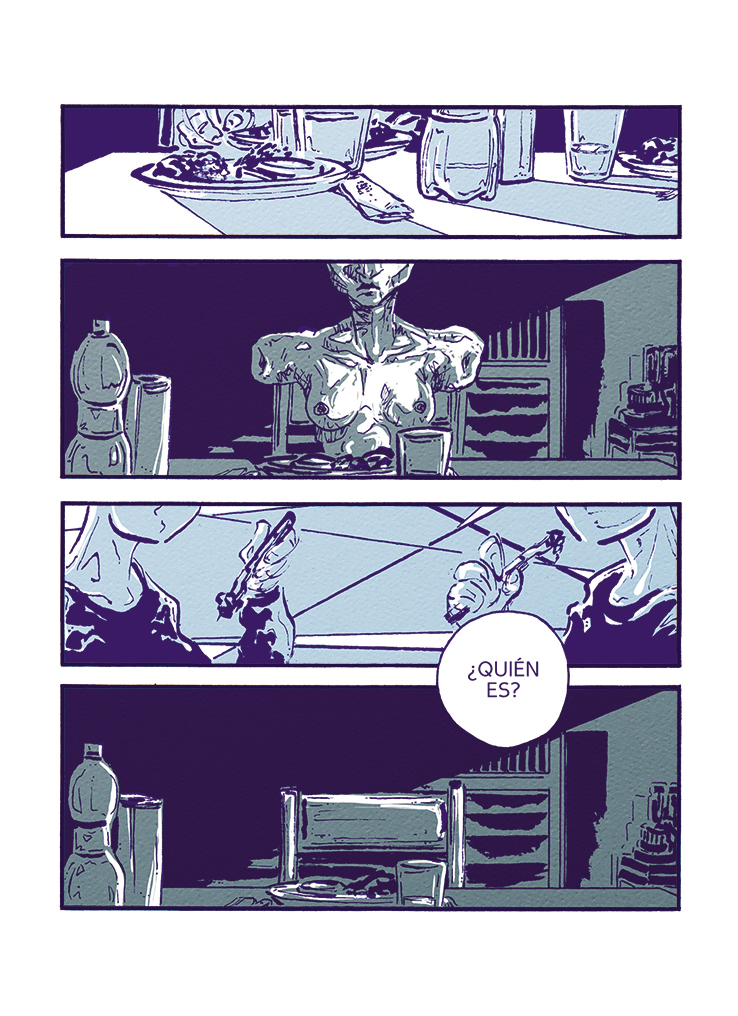 At the same time, Deriva Ediciones released EP (En proceso), a publication by Matías Chenzo made up of three short stories (as well as a video overture which can be accessed via QR code), developed across 22 pages. It places the author’s variety and depth of styles on full display.

It’s very tempting to read the title as if it were referring to a band’s EP. But when approaching a musical EP, one hopes to find a declaration of stylistic intent or a foreshadowing of a future release within the framework of said work in progress. And in the case of En Proceso, what we find is a different dynamic between the author and his work: prodding into uncertainties and offering up more questions than answers, both in its plotting and in the author’s illustrations.

Chenzo, who has shown an ambitious display of styles in his earlier work by changing up his graphic approach every 3 pages, uses En Proceso as a way to further refine his creative approach. “Una idea es una punta / Una máscara para la ficción” (“an idea is a tip / a mask for fiction”) are the first words we read in its pages. From there, and through the scenes that he crafts in his stories, there is a clear relationship between the uncertainty that is generated within the reader when faced with the author’s creations and Matías Chenzo’s own uncertainty as he throws himself into these new tools.

That leap into uncertainty works very well in EP, with pages that feature powerful images with a sober composition; Chenzo knows how to utilize the negative space in the page like silence between musical notes, allowing the reader’s imagination to join the dots throughout. 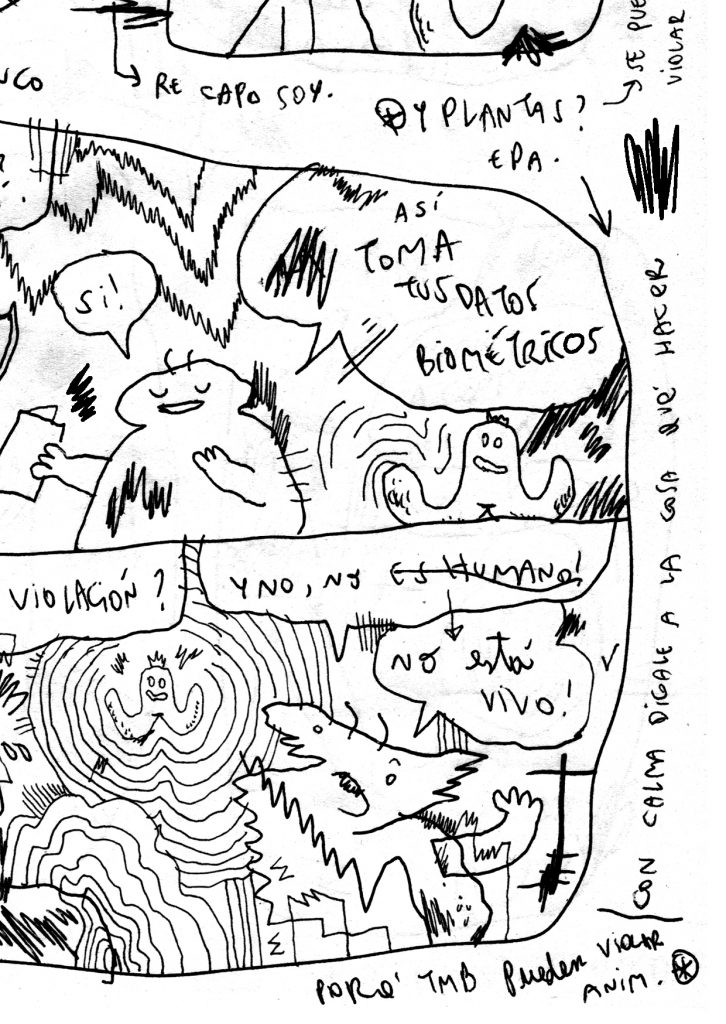 Furniture Comics AKA Paranoid Boy Long Story is the latest release by Iván Riskin, following Fragmentos y Distorsión. In this new self-published adventure, we once again join the author’s most famous character: Paranoid Boy, a hesitant young man who finds himself in constant dialogue with an imaginary friend who helps him out of trouble as often as he gets him into it.

Most of the works people refer to as “interesting” tend to defy simple synopses, and Riskin’s comics are no different. The dimension he adds to his comics is the constant tension between costumbrism and subversiveness, between a plot that appears to be  mundane and the introduction of elements that constantly break the norm of traditional panel layout.

So, what happens in the plot — an argument between Paranoid Boy and his girlfriend and the attempt to solve their differences with the help of his imaginary friend — is actually not as important as what occurs within the physical confines of the pages of Paranoid Boy long story. The reproduction of segments through cut-copy and the amplification of certain areas creates a sort of visual deja-vu, where we can see Paranoid Boy peeking through the margins of one page which then becomes the central element of the next.

In the author’s notes, we are told that his creative method was the motivation to draw in a 48-page notebook in a random order of pages. Riskin created a sort of narrative mineseeker effect, attempting to create a coherent story in the spaces available within pages that had already been drawn on. This dadaist approach can be found through the author’s annotations in the margins, sometimes as a severe text corrector, and other times as an invitation to reflect on a piece of dialogue. The amazing thing is the double readability: the story’s simple dimensions and the obstacles faced with the characters through the format and experimentation as a constant element in Ivan Riskin’s work.

We once again say goodbye and pledge to keep bringing you more noteworthy dispatches from the world of independent Argentine comics! For those who are curious or want to explore this further, here’s a small agenda of activities taking place within the next few days: 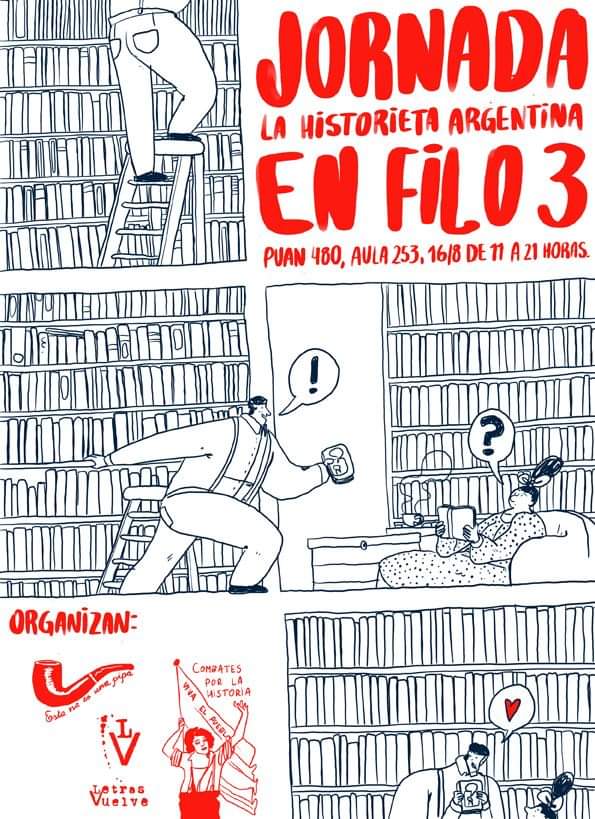