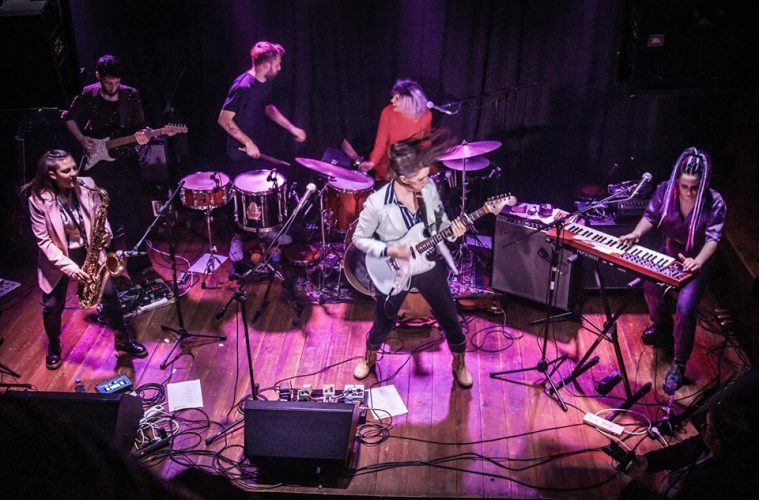 The Capricorn sun in me had decided to put this section to rest for a while; the poor goat found herself drowning, in dire need to put some order to the multiple activities my Gemini moon finds refuge in. It was OK for a while and then… well, then Lucy Patané released the single “En Toneles”, creating an uncontrollable whirlwind that beckoned me to jump onto that song and ride it, on repeat, every day, until the promise of the album release was fulfilled. When the album was out, I knew that was it. I had to see her live as soon as I could, and the sentimental reviews would be making their auspicious return to La La Lista.

Like so many others, I found myself marveling to the verge of addiction at her music. I will not get into the details of how exquisite and magical this 12 track album is, as we’ve already done so here in LLL. I will say, though, that it felt as if we all had been waiting for something; when this album came out, it dawned on us that this was exactly what we needed. It was this “a-ha!” moment where we all realized “claro, es por acá” – which in English would be something like “right, this is the way to go”.

And so, this dance, this dialogue between us and Lucy’s music started to take form: Instagram stories featuring tracks from her self-titled album were posted by the hour, and she became the topic of both online chats and live conversations: her lyrics, her band, how and where the album had been recorded. It was on that last Thursday of July that those present at the show saw this dialogue materializing as a newly conceived collective unconscious.

And we danced as Lucy’s fingers danced on her guitar, and her boots slid onstage; as Carola Zelaschi smiled her immense smile from behind the drums; as Mene, who I see as a sorceress, turned her keys into the best bass in the land; as Marina Fages went from soft to hardcore in her unique outer-space headbanging way; as we fell in love with Rosario Baeza’s violin and hung tightly from Melina Xilas’s saxophone.

And we sang every word of every song as every single one of our inflated expectations were fulfilled, as this fabulous universe unfolded before us: this album, this show, is Lucy Patané’s truth. This is her blooming solo, a victorious reaffirmation that chasing after one’s true self is the way to go. In such hard times, it is such a balm to our existence to be reminded of this with such forcefulness. Lucy Patané is our new prócer, my friends, showing us the way. As such, she should be a subject taught in school.

Time for this Capricorn goat to say over and out, but just for the time being. The twins are inspired, in full force, and eager to explore. It’s just that Lucy is a Gemini, you see…