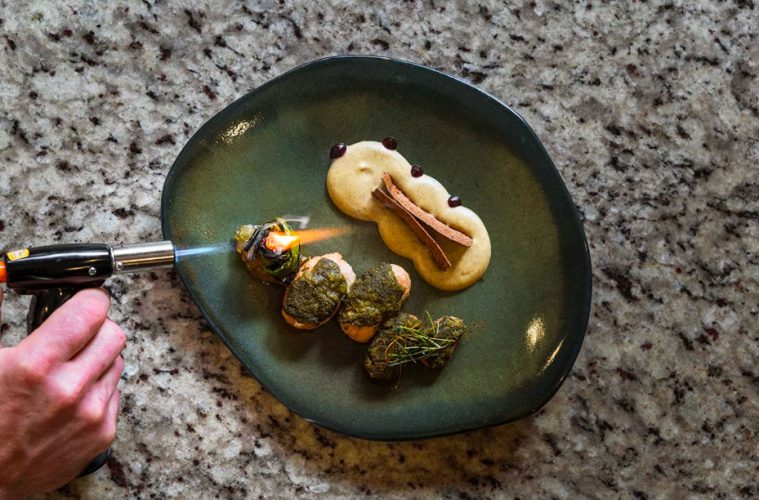 The scene is almost exactly the same as the first time I stepped into 13 Fronteras, a bold stance on the farm-to-table bistro that takes form along a long bar on the edges of San Telmo. Two worlds are separated by the glass wall that divides the restaurant patrons from passerby. Inside, guests order dishes like sheeps testicles and sauteed mondongo with excited apprehension. Outside, the foot traffic stops for a moment to analyze the menu taped to the door. Their eyebrows curl tightly. They are either intrigued or stare wide eyed as if observing aliens from another galaxy.

You are either part of the club, or you aren’t.

Nearly a year has passed since that first visit and review of 13 Fronteras. I have revisited as both patron and colleague innumerable times, tried most of the menu and learned to dry chiles, smoke cactus and get over my fear of fermenting alongside head chef and owner Dave Soady, a Washington DC transplant who crossed 13 borders with his partner, Cris, and two dogs before opening shop on the southside of Buenos Aires.

The trip would come to define the making of Soady’s menu. Eleven dishes create a cross pollination of flavors from across the continent. Staples like Mexican tacos and Salvadoran pupusas sit alongside lesser known regionalities like the North Brazilian acaraje and Cartagenero chipi chipi. Soady never takes these dishes into literal territory, rather, he uses the base and builds upward weaving in his curiosities for pickles and ferments and a canonical devotion to zero-waste.

A few dishes have become house classics, like the pork belly and kimchi. The slow-roasted pork is served with sopa paraguaya and an acidic in-house kimchi. The fatty pork belly pairs unexpectedly well with the homey slice of sopa, a cheesy cornbread. The mild sweet corn flavors pop on and off the tongue alongside the kimchi. Pan-fried surubi is swapped out for long braised llama in the house taco. Smokey in-house made chipotle add an extra layer of richness to the gamey strands of llama meat, served atop homemade crunchy tortillas made of freshly ground hominy masa.

Cuttlefish are stuffed with shrimp and caramelized onions and dyed in their own ink. Slightly cooked zucchini adds a welcome freshness to the savory stuffed fish. Oddly enough, the cuttlefish have the same delightfully tender texture as a line of sauteed sheep’s testicles. A green crust of herbs mimic a grassy pasture and nod back to Soady’s days working the Argentine countryside. The dish is emblematic of the house style; his dishes go straight for the knockout uppercut rather than beating you up with a succession of light punches.

For dessert, the menu is absent of descriptions. Guests can choose between two regions, Mendoza or Ecuador, and must let their intuition guide the choice. Mendoza nods to the regions fertile soil with savory nods to olives, carrot and apple. Ecuador is a more traditional dessert, a sweet space age interpretation of the country’s pride and joy: the banana.

13 Fronteras is open for lunch and dinner service. On weekends, it is recommended to make a reservation. Grab a seat and join the club.

Open: Sunday through Thursday 12 to 11pm; Friday, Saturday 12pm to 12am; closed Mondays

Price per person: approximately $600-800 per person