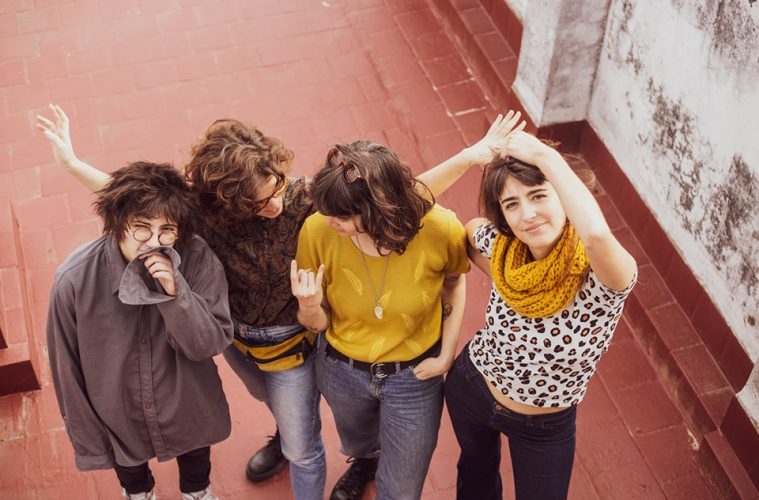 Pasaje Osaka and Amplilabial at Makena!

Indie rock band Pasaje Osaka returns to Makena this Thursday night to present their new single “Todo va a estar bien” and this winter finds them once again playing alongside their indie pop friends Amplilabial, who will be saying goodbye to their album Collage.

This Thursday marks a long-awaited encounter of three bands who have been friendly for a while, but will be sharing the stage for the very first time at this event. Los Aullidos will be presenting their most recent single, “Los Desposeídos;” Ruiseñora, the songs from their upcoming debut album Viaje al centro de la selva eléctrica, which is set to come out in August; and Tobny Houston will continue presenting their sophomore album Familia and also bring us a sneak preview of releases to come. The event was made possible with help from Lagunera Discos and Goza Records (that’s Barbi Recanati’s record label!)

Check it out, guys! I organized another unplugged show at Alma Zen, the hip little vintage clothing store right down the street from the Abasto mall. I’m going to play some songs as my singing and songwriting evil twin/alter-ego Emily And, and I’ve invited some other very special singer-songwriters to join me. Guillermo Gallacher comes to us from the far away land of Seattle, to share some music with his hometown while he’s here visiting. Local pop sensation El Joven will be presenting acoustic versions of songs from his new album La Magia de la Altura, and Luwu will be playing their debut live performance in Buenos Aires before heading off the México forever (why does everybody leave???) There will be drinks, empanadas, buena onda, friendship, and probably a good bit of angst as well, so don’t miss this.

Indie rockers Tobogán Andaluz are playing in Capital this Friday at Centro Cultural Richards. Afterwards there will be a DJ set by DJ Glastumbero, which, if their mixing is half as fun as their DJ name, is sure to be a blast. You can get your tickets in advance through EXILES RECORDS.

In this, the eighteenth edition of the Anomalía ciclo, we will count on the presence of Puerto Austral, who will be giving their final show in Argentina before heading across the pond to play at the ArcTanGent festival in Bristol, UK. They will be accompanied this Friday by guitar-and-drums noise duo Riel, who continue presenting their most recent LP, Espacio Interior, and Fusibles, a sextet hailing from San Miguel, who have been playing sharing their latin post-rock fusion with the world for over twenty years.

Tomi Porcelli and ENDO unite for a special show at Club Cultural Matienzo to share the latest advancements of their repertoires. Tomi Porcelli in full band format, accompanied by Matías Mendez, Clara Lambertucci, and Dustin Marin, with Marina Verduci and Tomás Boqué sitting in. They will present Tomi’s album IR as well as some newer songs. ENDO, consisting of Ezequiel Marano, Gastón Duchovny, Maximo Signorini, Dante D’Angelo, Diego Katabian and Guido Reynoso, covers a wide range of sounds and reflects upon the place of technology in the evolution of human lives. They will be presenting new material and also some reinterpretations of songs from their album 25:17.

Music and art are the most important tools we have for breaking down the barriers established by the concept of “normalcy,” of which we no longer wish to take part. This is a ciclo born as an independent form of artistic expression, a space for all who wish to share their art, regardless of genre.
The lineup for this first edition will include Re Signados, opening the show with their dark and hypnotizing sounds, varying within the realms of post punk and dark noise. Then, Trileros will give us a taste of pure rock, employing their entire sound arsenal for the occasion. And last but not least, Los Momias will close out the evening with some classic punk rock.

Why stay home alone on this cold Sunday night, when you could share it with the theatrical duo Las Nubes, the poetry of Nadia Sandrone, and the music of Susi Pireli. Las Nubes (Vivi Tellas and Rita Pauls) will be presenting some mother-daughter scenes they’ve been working on, Nadie will be performing selections from her original texts, and the duo Susi Pireli (Paula Trama and Inés Copérnico) will play us some of their electro-pop tunes.