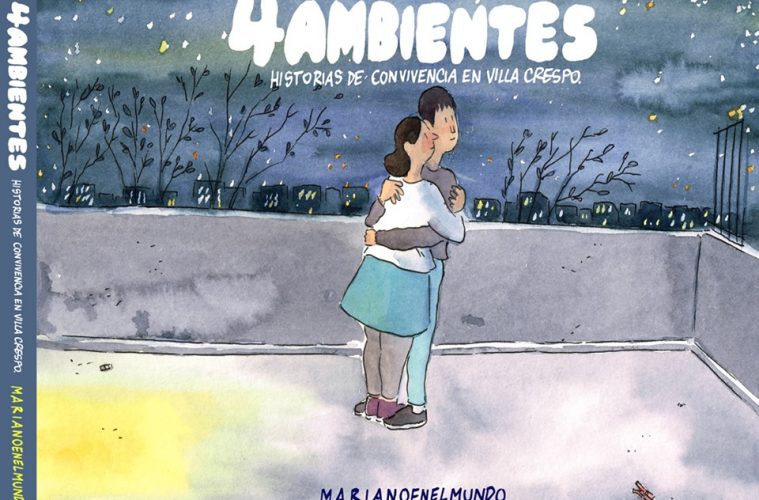 Welcome to La La Lista’s monthly column where we get you up to speed on independent Argentine comics! In this issue of Ltd. Edition, we’ll be showing you two recent titles that were published independently by their authors: Mariano Diaz Prieto’s 4 Ambientes and Agustina Casot’s Brujas y Pantuflas.

These days, there is a very strong link between the concept of independent comics and self-publishing. Beyond the emergence of new independent publishing groups, there are works whose production, printing and distribution is run entirely by their authors. Following the release of these two self-produced titles, we chatted with their authors to learn about their process and opinions on the subject.

Brujas y Pantuflas marks Agustina Casot’s third self-published comic book. After the release of Diverses in September 2018 and Chongas earlier this year, the author — who has a long history of having her work featured in fanzines, and who also organizes the independent feminist comic event Vamos Las Pibas — compiled a series of comic strips starring a peculiar group of witches. Said witches have a particular vocabulary, and do not seem to be governed by the stereotypes applied by mere mortals — above all the pejorative use of the word “fat,” commonly used as an insult or derogatory attribute.

Through social networks and appearances in the author’s fanzines, the short witch and the tall witch had been transforming mansplaining machirulos into toads, and attempting to make out with humans (with varying degrees of success). The through line in these strips is the beautifully irreverent way in which they respond to the stereotypes and prejudices applied by “the normal,” and the poetic turn of the absurd perfectly achieves this comedic effect.

“I think it’s very important to highlight the value of self-management, especially because sometimes the work of authors falls outside of the editors’ criteria. It’s all about removing the stigma from fanzines.”  What Casot expresses is tied to this low-brow / high-brow distinction between a self-published fanzine and the supposed legitimacy of partnering with a publisher. “There isn’t a large market for us here, and they cannot edit us all, because these are projects supported by people’s efforts. The image of the messiah-editor is wrong; they are people who edit what they are able to with the money they have, so it’s no use waiting to just be handed opportunities. You have to just create, without waiting for someone else to release your material or do all the work for you.”

Free from the notion of being picked up by a publisher, Casot patiently built a body of completely self-published work that took her from releasing short fanzines to publishing compilations of her strips, with a focus on dissidences taken to the realm of comedy and a style that focuses on regional customs. She emphasizes that the constant in the self-management mission is to maintain impetus and enjoy the process: “It is a formula that works because I move around. If you are lazy, it is difficult for it to be sustainable. I used to paint, and aside from enjoying the act of painting, I also enjoyed making frames and working with plaster. It is necessary to get involved with all the aspects before and after the creative moment, to see it as an occupation.”

4 Ambientes by Mariano Diaz Prieto (under the pen name “Mariano en el mundo”) is a book that brings together four years of comic strips exploring seven years of a cohabiting relationship in the Buenos Aires neighborhood of Villa Crespo. In its pages, a mixture of everyday scenes and reflections born of the mutual empathy between the protagonists (Manuel and Laura). Between the compost on the balcony, Manuel’s cannabis delirium or Laura’s aversion to insects, there are flashes of magical realism that seep in, such as a turtle that climbs the walls of the building or spirits that prowl the apartment shared by the couple. But above all, what these water-color pages convey is the testament of shared time and the exercise of finding a balance in the coexistence between romantic partners.

The author, who also works as a drawing teacher and whose students formed the Periférica – narrativa al margen, chose the path of self-publishing after presenting the material to various publishers and not finding much interest in it. Beyond not receiving positive feedback from local publishers, Diaz Prieto says about the print media and publishers: “There is a contemporary approach to the disappearance of the publishing house as a space of legitimacy. We are at a transitional moment in paper and comic strips, where those who buy the physical releases are those followers of the strip from its digital format.”

Self-publishing is not only presented as a loss of faith in the editorial system as support or guarantee of success for the printed material, but also as a freedom to develop the project in his own way. “For me, it was a cathartic process of capturing the relationship with my partner of seven years, to rethink the stages of our relationship and coexistence. I could not see it in any other way than materialized as it is. I was able to indulge in the joy of making the aesthetic proposal for the cover and the approach of the material, including the prologue, with great freedom.” This freedom offers an opportunity to broaden the topics addressed by local publications. “With Agustina Casot’s Diverses, there was a case of a publication that opened a gap by which other publications may appear, moving slightly away from the canon of what is commonly produced in the Argentine comic strip. For me, this implies a gradual step towards a period of greater maturity and less infantilism in the subjects that are represented.”

Diaz Prieto highlights another symptom of the current era: the ecosystem that is created in digital platforms, consisting of an author and a specific audience of followers of the strips, who are not necessarily part of the world of comics or have much interest in the medium: “I do not consider 4 Ambientes to be a comic made for people who consume comics. That has never been my idea. Self-publishing allows us to make specific comics for a widely varied range of production. I would like, in a few years, to see projects made by other types of people, specialized in different fields, that can provide knowledge and a certain vision about different areas. I know anthropologists, sociologists, psychologists who make comics, who have gone through my workshops. And they have different tools, resources, and ways of doing comics and tackle subjects in a more documentary-like fashion, such as interviews.”

For our part, and in the anticipation of new, exciting self-published material to review in the next edition, we bid you farewell; but not without first recommending you to mark Saturday August 10th on your calendar. That’s the day of the fanzine and independent comic fair BOCETO, organized by the great folks behind the bi-annual event DIBUJADXS. This event will be held at the Centro Cultural Recoleta (Patio de los Naranjos) from 2 p.m. until 8 p.m. The line-up provides a great opportunity to explore some publishers and authors with recent and very interesting material – and why not, give in to temptation and purchase some of the titles we have been recommending!