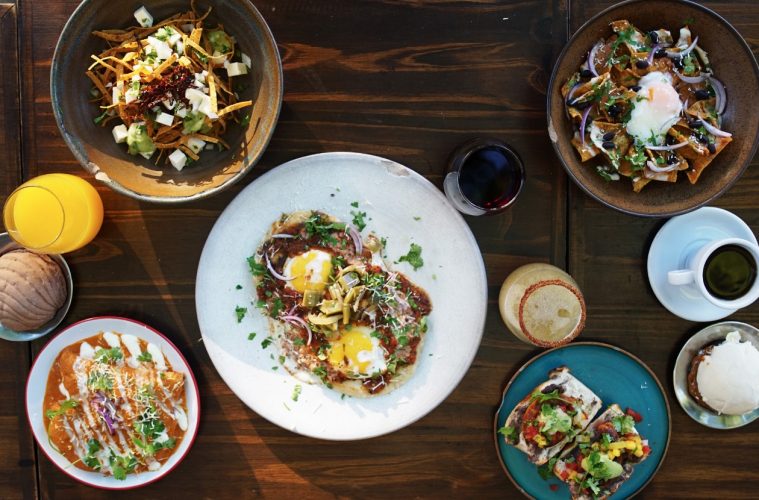 Cecina is a thinly sliced meat marinated in warm lard and dried underneath the pounding dessert sun typically associated with the town of Yecapixtla in the Southern Mexican region of Morelos. The Aztecs used this preservation technique with long strands of wild game like rabbit, boar and deer. When the Spanish arrived and likely introduced the natives to European rarities like jamón serrano, wild game was slowly phased out for domesticated beef and pork. Today, it is finished off on the grill and wrapped in warm corn tortillas with a cream and cheese dairy hug.

The Incans used similar preservation techniques to prepare their own cecina further south along the continent. Chef Teresa Hernandez of Mi Chiclayanita sources chewy sting ray dried on the rooftops of her native coastal town of the same name and tucks it into a starchy tortilla of the potato persuasion at her small La Paternal eatery. At Almagro’s Amazonian-style La Canoa, triangles of pork are drier and fill the mouth with the cloudy flavor of a smoky barbecue pit.

This last Friday, the trio behind Mexican pop-up Ulúa got together with New York style bagel shop Sheikob’s and introduced their own take. Corned beef was sliced, marinated and left to dry before tossing on a bit of sugar to caramelize over the fire. On Friday night it flew out of the kitchen on a warm corn tortilla with pico de gallo. I caught up with it the following day, layered in between an everything bagel with steaming scrambled eggs and a salsa verde prepared with a hint of mustard.

This was an unusual departure into fusion territory for the trio which is formed by chef Antonio Bautista and sommelier Freddy Morapee, and Jesus Cabale, owner and cook at Chacarita’s Latin restaurant, Elote.  Bautista and Morapee met each other at culinary school in their native Veracruz; Cabale, a self-taught restaurateur from the same Mexican region, fills out the crew.

Ulúa began popping up in early 2018, initially as a formal tasting menu with wine pairings at Palermo’s Ser y Tiempo before setting up shop  at Casa Cordoba. Both were short-lived as the crew got their footing.

But the cecina at Sheikob’s was emblematic of a team that has found their way. Today’s version remains heavy on tradition — chiles are brought from abroad and specialties like nopal and tomatillos are magically sniffed out like pigs in search of truffles from local small producers. But the high-end approach has been knocked down a few pegs.

To sit at Ulúa’s table is to take in the flavors of a million abuelita’s kitchens and the aromas of chaotic outdoor food markets, the sound of tacos sizzling in the background, with tiny nods to the high-end restaurants that Bautista and Morapee got their starts in. Could this be the second coming of Mexican food in Buenos Aires? An end to the days of lazy flour fajitas and sometimes well-intentioned but mostly misappropriated regional dishes? Time will tell.

For the last two months they have been honing their identity at Elote in the form of a Sunday brunch. In July, they will transform the restaurant completely into a full blown taquería under their own name. The brunch offers a glimpse into the budding restaurants future:  chilaquiles laced with a tangy salsa verde and a gooey soft boiled egg, tortilla soup that fills the gut with nostalgia on a chilled winter afternoon and toasted baguettes spread with savory beans and buttery slices of avocado.

There is no set date for the restaurant opening, but in the meantime you can check out the brunch every Sunday beginning at 1pm. Get the chilaquiles. Order it with a beer.

Hours: Sundays from 1pm to close