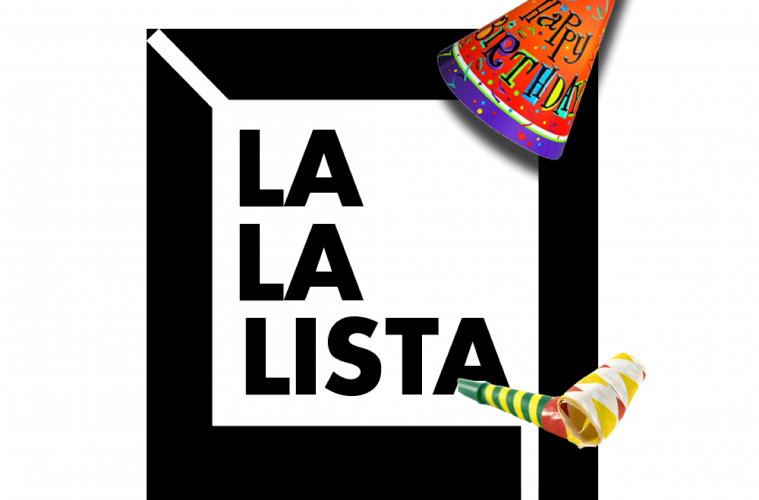 One Year | A Letter From The Editors

Yesterday marked one year since our launch! In today’s letter, our editors reflect back on the journey so far and share their perspectives on the highs and lows of the last 12 months.

They have always weighed heavily on my life, loaded with expectation. Are you happy? Are you having The Best Day?  Are you achieving your goals? Are you Where/Who You Want To Be?

But yesterday’s birthday was different. Yesterday marked one year of La La Lista. And to be honest, I didn’t always think we would make it.

One year ago, I was celebrating my 29th  by devouring Indian takeout with a small gathering of friends (Dulces de la India – still highly recommended).  I tried to embrace the festivities with a smile, but internally I was feeling sleep-deprived, stressed, and terrified of looking like an idiot.

And for good reason —  I had started a magazine that morning.

I wasn’t alone. I had recruited my dear friend and food writer Kevin, as well as my co-columnist Jorge from our prior music agenda post at another publication. If either of them had misgivings , they hid them well — for which I am very grateful. You see, I had this idea that I just couldn’t shake.

What if we created a magazine that made it its mission statement to cover women and nonbinary artists and creators just as much as we cover men? What if there could be a site where we challenge the local canje culture and eschew the amiguismo of the in-crowd to champion the projects that were truly deserving of our coverage? What if we could project the love and appreciation for the people working so hard to make this city the place we choose as home into the public sphere, and begin to foster a community in the process?

La La Lista started one year ago today. In that time, our team has grown and shrunk and grown again, largely holding steady at 10 staff members with the additional odd contributor. We’ve featured the projects of over 50 artists and musicians, reviewed over 40 restaurants, compiled countless playlists and penned four truly excellent advice columns, five open letters, and four entirely necessary rants. We have published a weekly music agenda every Wednesday since we started (minus our three-week holiday break), and a food agenda 47 of those same weeks.

We haven’t always succeeded in our mission, and we have sometimes featured the wrong people. But we’re learning. And when I scroll through our past agendas and our coverage as a whole, I see something resembling the vision I had for our weird little corner of the internet when it all started just one year ago.

Looking around the table at our monthly staff meeting/anniversary celebration last night, I took in the faces of an incredibly talented group of humans who are breathtakingly dedicated to making that little corner bigger and better all the time. I’m not worthy of their contributions. How lucky I am that I don’t have to be. Because La La Lista is theirs.

When I started this project, I said I wanted it to be a love letter to the city. Twelve months later, I can honestly say (with much shock and amazement) I think this city is starting to love us back.

What a humbling thought. What a reminder of our responsibility. We have so much more work to do.

Over this past year I’ve watched this little, birthday baby form into a publication that not only stands for something, but one that constantly re-assesses how well they are backing up those convictions. In one year’s time this collective of creative weirdos has elevated voices, supported artistic communities, and tried really hard to point people in the right directions.

There have been so many moments I’ve hit the publish button with an overwhelming sense of pride to be a part of this publication. There was the time Kevin ranted about the lack of authenticity in the food scene. He wrote of elevating the neighborhoods of the marginalized, about stopping this bullshit whitewashing that our beloved Palermo does so well. There was the time Jorge interviewed a legend of a photographer and somehow turned a five minute interview into a stunning piece on the temporality of human existence. There was the night before the 8th of March when we sorted through the 2018 directory of Argentine victims of femicide. I remember the hours it took us to write names of mothers and daughters murdered at such shockingly young ages. The hours it took Evy to publish those into stories, to name every single one of them. I can still feel that stomach drop—a poignant reminder of why we march. There’s been Ask an Alfawhore reminding you to love yourself, Emilyann telling you to leave your fragile masculinity at home, and Tamx telling you to get eating, god dammit.

We’ve had killer social media managers and some badass guest writer friends who’ve written about events, bands, and local entrepreneurs worth getting to know. But mainly, there has been so much heart behind it all. So thank you to the team of brilliantly creative individuals that trusts me with their commas. Thank you to the bands, the businesses, the artists who have let us pick your brain and promote the cool shit you make. And thank you dear Buenos Aires for being a city that provides such a space for it all.

I would have never actually said this out loud, but that was my immediate thought the moment Evy first told me about her plans for La La Lista.

We had a decidedly-okay situation going on elsewhere — a shared column that allowed us to shine a light on some of the darkened corners of the Buenos Aires underground music world by way of a weekly concert agenda. It kept us connected to a burgeoning scene of new and exciting music, provided us a platform for silly musings, and was featured on a publication with a decent following. We’d be giving that up to embark on the thankless task of starting up our own little ramshackle shindig and yelling into a void, begging for attention. For free.

I did a pretty good job of concealing it. Reading these words will likely be the first time Evy ever finds out about that initial hesitation, that internal push-and-pull that came well before any semblance of enthusiasm. The words that actually came out of me that afternoon were “whatever you want to do, I’m game.” And there was actually a good reason for that.

Over the course of the last few years, I’ve come to a few hard truths about the world and about myself. One of them is that I’m woefully inept at gut reactions, and I should give myself some time to process these new ideas before conveying a response. Another is that the world is filled with “why” people and “why not” people; the former are fastidious nitpickers who are so comfortable in the status quo that they preemptively disassemble every potentially disruptive idea that challenges it. The latter embrace life, ideas and new opportunities with zeal and gusto. They chase whimsies down unfamiliar corridors. They make things happen.

I’ve long felt caught between these two approaches to life. As much as I want to be a full-on “why not” person, it’s not something that comes naturally to me. I have to push myself into it, contort my neural pathways out of their naturally self-defeating tendencies, and shake myself out of the dysthymic doldrums of “why”. So I join Evy in this adventure. And every day that I look at the La La Lista frontpage, I am so glad I did.

Buenos Aires breathes with art, culture, and stories. From the obscure fringes to the work that spills out to the mainstream, the city is alive and vibrant with amazing work made by incredible people. Putting a light to the richness and diversity of this cultural scene is probably the best thing that I am involved with on a daily basis. The fact that I get to do this along with a wonderful team of writers and collaborators is icing on this very robust cake. I take immense pride in it. And it serves as a daily reminder of the importance of pushing myself past that initial layer of world-weary skepticism. There are even greater things to come, and I’m honored to have been there from the ground floor. Thank you for reading.