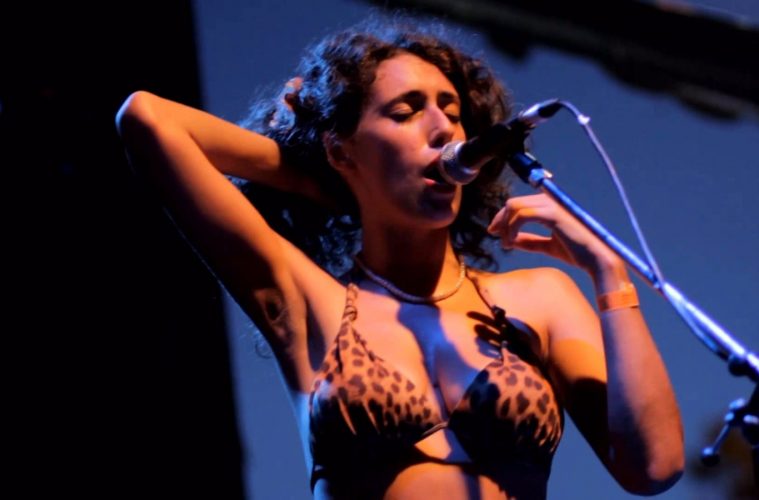 June? Seriously? Where did all the time go? La La Lista is celebrating its first birthday tomorrow. Or, anniversary? I don’t know which term is more appropriate, but birthday sounds more fun. Also, it is Evy (our editor-in-chief)’s actual birthday tomorrow, and she just happens to be exactly 29 years older than La La Lista. In honor of this special occasion, I will be informing you of a bunch of awesome music events this week. Oh, wait, I do that every week! (Actually only three weeks a month; Evy does the other week.)

Valle de Muñecas and Rosario Bléfari at Niceto (Lado B)

Valle de Muñecas is playing host to three unmissable events, June 13th (this Thursday), 20th, and 27th. This week they will be sharing the stage for the very first time with Rosario Bléfari and full electric band. You can get tickets in advance at Anthology Discos or by sending a Facebook message directly to Valle de Muñecas.

Futurock and the British Council Argentina invite you to The Selector Play ciclo at Strummer Bar. They will be ringing in the first edition of ciclo, which will involve the live transmissions of two live band sets, this time around those two bands will be: Nubes En Mi Casa and Amor Elefante. The transmission will start at 7pm, and those who come out early for the event can enter to participate in raffles and give-aways that will take place at the end of the show. Closing out the evening will be DJ Sir Maxi Martina.

With #necesidadyurgencia, a collective of artists take to the streets of downtown, armed with songs. Thursday 13th, 20th, and 27th of June, with Especial Cultural Bar as home base, the independent record label Fuego Amigo Discos will accelerate and promote this series of evening concerts, that reach beyond genre and style to enlist a selection of musicians who capture the temperament of difficult times. The bands playing in this week’s edition are: Verde y los Caballos a Marte, Península, and Funes el Memorioso.

This Friday, psychedelic folk-funk group Liquen, rockers Kamisama, and singer songwriter Tomi Porcelli arrive on the streets of Villa Ortúzar to play at Otra Historia Club Cultural. You can get your advance tickets by contacting the artists directly.

For this Friday’s fireside gathering, Camping will warmly (hehe, get it? cause it’s a fire) receive the unique talent and diverse style of Paula Maffia. Get there by 9pm, and the show is free. Total luxury.

Fridays at Strummer mean songs, and rhythmic variables that light up the room with music and color. And on this occasion, live music performances by Krupoviesa, the sweaty, punky band that only plays choruses; aging rockers Deportivo Alemán; and ENVIDIA, solo project of Marcelo Moreyra (Mujercitas Terror).

After kicking off their album release tour with an epic performance at the RockVi in Río festival in their hometown of Rosario, the Gay Gay Guys are hitting the road to bring the joy of Droga y Delincuencia to their fans in Capital Federal. They’ll be playing this Friday at Especial Club Cultural, along with Inkantor, De Incendios, and Los Repuestos. Come out of your closets this Friday night, bring along a baggie of rascalness, and leave the homophobia at home; this one will be a show to remember.

At this show, brought to us by Convergen Producciones and Inerme Discos y Libros, HABLAN POR LA ESPALDA will present their new record Afuera. Hardly two days after the official presentation in Montevideo, the band will be doing it again in their second home, Buenos Aires, offering a complete show where they play the album in its entirety. Invited bands for the occasion are: Me Quiero ir al Infierno, and Los Muchachos de la Secta (who were featured in La La Lista earlier this month!)

We have to build the future! But, in the mean time, let’s get together to listen to the songs that bring us echoes of it. Las Jóvenes Idealistas, a band of sentimental objectivists, will be joined by the thunderous talent of Srta. Trueno Negro, and the feline fun of Gato, this Saturday at La Confitería.

Eclectic and powerful, Marina Fages has added another chapter to her works: Épica & fantástica is a new journey where each song condenses strength and melodies with an inspiring appetite, transforming our reality into epic adventures. She will be presenting it live at Niceto with the full band this Saturday. Mariana Päraway and Violeta Castillo have been invited to open the show. Also, some of the musicians who will be accompanying Marina throughout the show include: Lucy Patané, Marilina Bertoldi, Dani Umpi, Benito Cerati, Fradi Fradi Fradi Fradi Fradi, Paula Maffia, Barbi Recanati, and Flor Iribarne.

Start saving up your energy now, because Spastic Flex Adventure: Gemini Edition is not only going to bring out your most Gemini-y side that maybe you didn’t even know you had, but also, you’ll have the chance to encounter some rare jewels of Buenos Aires’ emerging rap and trap scenes, that you probably didn’t even know existed. This edition will feature performances by: Crakow, Kurí, ¡Shortsᴉ, Tcof, and Lascavx. When the bands are finished playing, there will be a fresstyle rap jam (and if you win, the prize is three free beers). The entrance is 100 pesos, BUT if you are a Gemini and can prove it with your DNI, you get a special Gemini 2 for 1 discount!

Tired of just experiencing music at surface level? Has your soul been out riding the highway too long? Come out this Saturday to hear climactic sensorial groove band Soul Parking in the underwater studio (yes, it is literally under water) Estudio Nave. Bring your scuba gear and – no, I’m just kidding, you don’t need scuba gear, but you DO need to reserve your advance ticket by contacting the band through Messenger or WhatsApp (11.3861.0310).

Cadete Lunar: Episode IV – The Return of the Jedi

This Saturday, grab your space suits and – no, I’m just kidding, you don’t need space suits, but you DO need money for your ticket – no, I’m kidding again, it’s free! Just bring your self and your burning desire to travel to the moon. Cadete Lunar (project of Matías Figueredo, bassist of Penny Peligro and owner of Melotron Sala de Ensayo) will be playing in Multiespacio Korova, introducing a a new (and very mysterious) drummer, and celebrating his birthday!

Javier Mareco y los monos del espacio are presenting a special show split into two parts: #JUERGA (jamboree) and #SERENATA (serenade). The first half, Juerga, is happening this Sunday. A night of partying to quench the urge to dance, and the second night (June 30th), a fireside serenade, the perfect mood for embracing that special person by your side.