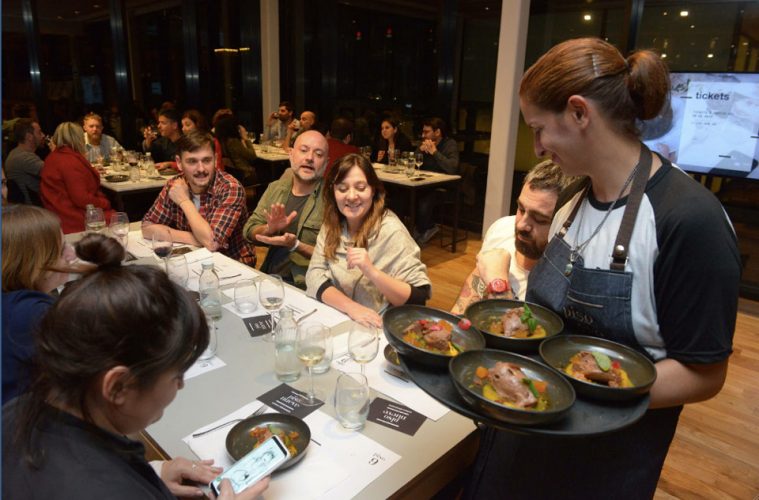 “Please don’t get angry during the meal.”

I took my focus off an exclusive view of the HSBC building glowing red in the distance and perked my head over to the young server timidly explaining what awaited me and the rest at this communal table for six. Is she going rogue? I wondered quietly with screaming facial gestures.

“There are four courses over an hour and a half. When the chef decides to send out the next course I have to pick up your plates. You can choose one drink and there are no refills.”

I glanced around the room to see if there was a manager walking around with a NO INSISTA sign written on torn cardboard.

“You can have as much water as you want,” she concluded before bouncing off towards the kitchen.

This wasn’t the start I expected at Piso Nueve, an ambitious new restaurant on the top floor of the Centro Cultural Néstor Kirchner, which opened to the public last Tuesday. Every fifteen days a new chef is brought in from a different corner of Argentina and tasked with creating a four-course tasting menu that represents both them and their home. Andrés Chaijale of Córdoba Capital kicked off the series.

The meal started with a bang. White polenta and white chorizo, unexpectedly soft in texture and slightly sweet, were thrust into space with a goat cheese cream that smacks your jowls and sticks to the tongue. It was an interesting nod to traditional dishes of the Northeast Italian Friulians, abundant in Córdoba and known for a variety of cured meats.

A rushed locro quickly sizzled. It hit the tongue with a whimper and moved to the back of the throat in utter silence. Nutria, a sort of cross between a beaver and a large black rat, was greeted with concerned confusion from what felt like everyone in the room. Prepared like an arrollada, part of the meat was ground, smoked, rolled into the brisket meat and painted in an orange glaze. It was completely ordinary albeit wonderfully tender. A cosmic goat cheese paired with dulce de batata made for a dreamy dessert, but ultimately, the first and last courses felt like ornate bookends for a paperback you’d take on a poolside vacation.

All of this is to be expected. It isn’t easy to run the initial services of a brand new restaurant. It is especially not easy to run a successful service for a room of 130 guests, flipped once for a total of 260 eaters, one right after the other, 10 times a week. My skin itches just thinking about that. A poor locro was almost expected.

Harder to digest, though, was the sales pitch.

In the lead up to the restaurant’s opening, a series of publicity videos featuring big name chefs gathered around with television personality Ximena Saenz to talk about valuing Argentine culinary technique, national food culture and the future of the country’s food system. Asked to sit at the table was a micro-mundo of cooks, nearly all from Buenos Aires that own restaurants on the city’s northern reaches, with menus considered an unattainable luxury to the average Argentine.

It was the sort of self-congratulatory amigos-only party that is so commonplace in the restaurant community and local food journalism. Except big media has no obligation to its readers. Let La Nación or Página/12 represent food culture how it and its readers see fit. But for a cultural center supposedly seeking a national discourse and a larger societal change, a little more context is needed.

Let’s set the record straight: I don’t think that any of the chefs, among them Narda Lepes, Fernando Trocca, Sole Nardelli and Germán Martetegui, are undeserving of accolades. It is quite the contrary. They have all left an undeniable mark on local and national cuisine and were amongst the first challengers to the old school. But they certainly don’t deserve all the damn accolades, and their voices, already heard loud and clear time and again, aren’t the only voices with value. They are one part of a much larger equation called CULTURE.

Let’s suppose for a moment that this project is about the future of gastronomy, and more so, the very specific gastronomic style of these chefs and their counterparts. Gastronomy is the art of eating. By nature, it is hierarchical and exclusive to those of us privileged enough to afford food as a novelty art form. The idea underneath this guise is great: bring chefs and obscure [to porteños] regional cuisines from all over the country to one centralized place. It is the lifeline to the development of a national food identity. But this isn’t the concept. And even if it were, does it deserve to be the free-trade direct from producer Rionegrense cherry atop a state owned cake? No.

The project has been consistently advertised as an initiative to introduce all Argentines to the bounty and lost food culture of the land. Just read the publicity briefs, “bringing regional cuisine to all.” And it is written in giant bold letters on the placemats at each table, CULTURA ALIMENTARÍA.

Like, do you all know what the definition of alimentation is? Alimentation is nourishment. Nourishment isn’t a choice. It is a necessity. And good nourishment, nourishment that is healthy for humans and the environment we occupy, is a basic human right. The culture that surrounds nourishment, meaning changing the way we all eat, whether that be for our health or the health of the land and people that work it, is something that each and every one of us participates in. It is politics. It is economics. It is health, food and environmental safety. We all have a right to participate.

But the lack of inclusivity, the absence of a moral understanding of ‘todos’, reeks in every single detail, from arranging the dining room facing Puerto Madero and LITERALLY giving its back to the city to an exclusive $650 price tag at a space built to make culture free and inclusive to all to not allowing guests to specify dietary restrictions or allergies with their reservation.

And yes, you read that correctly: $650 for a meal para todos. In this economy. Put on your Macri tinted glasses if you are having a difficult time comprehending that.

Changing the current status quo was never the intention, but rather, a disposable marketing strategy, and showing all Argentines the hyper-regional foods of their country wasn’t, either. Whether the food is good or not, whether the eating experience is something new, it all becomes erroneous. Until we bring everyone to the table, the fundamental changes needed to elevate Argentine cuisine on a world scale will never happen.

Editor’s Note. This article was updated on June 12th for clarity and sass.