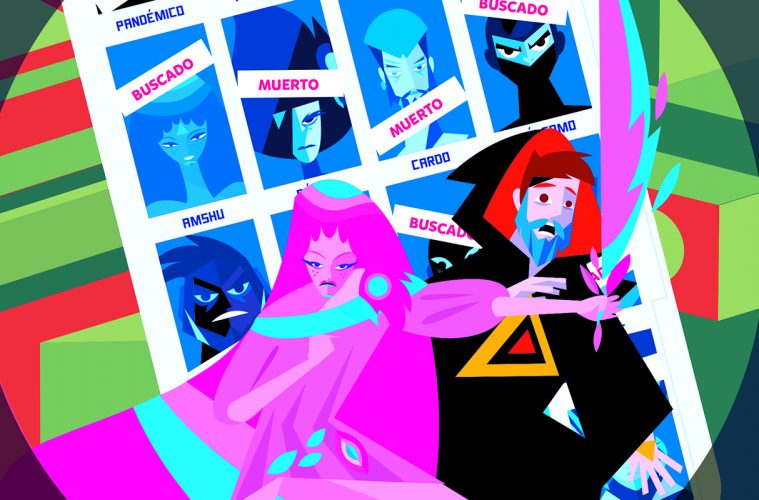 Welcome to another installment of this monthly column dedicated to the ninth art! Well, technically, in order of appearance, it should be called “the seventh art”, but… anyway: Thrills in strips! New takes on old genres! It’s (some of the) brand new indie Argentinian comic flavors of the month, here on Ltd. Edition!

There are two comic books that came out during May that feature an update on historically exploited terms in the comics medium: Superhero fantasy and science fiction. You know the saying, “Hate the player, not the genre”. That there are still stories about these super-powered beings that don’t feel like beating a dead horse (with a cape) is something to celebrate. The fatigue one might feel with regards to the clichés of heroism, capes and sci-fi shenanigans vanishes the moment one comes into contact with a more personal and well-realized piece of work within the margins of the mainstream.

Patricio Oliver’s Los Potenciales is a comic that first surfaced as an online strip for the website Totem Comics, a site that features free comics made by local authors (with Fer Calvi and Quique Alcatena as site mentors and main exponents) with the aim of reimagining the superhero genre. Its pages tell the tales of the residents of the city of Brutopolis who have reached the status of Potentials, awakening their powers to become enhanced individuals. There are Potentials that have been in this heightened state for longer than average as well as those that are just starting to develop their capabilities and dealing with the sheer weight of their becoming, without forgetting their past as mere mortals.

Oliver weaves a plot out of the relationships between these superheroes, as well as with the rest of the population; their public perceptions and private disputes, with a marked influence of two genre classics: the subtext of dissidence and social ostracism of superheroes as discriminated mutants in Chris Claremont’s X-Men, as well as the “heroes as a sitcom” tone of Dematteis and Giffen’s late-80s run on Justice League International. But enough with the name dropping, the important thing is that the author manages to find new themes to explore in a cast that’s full of characters in a constant state of questioning and reaffirming of their own identities, both in terms of representation and the status quo of the standards of beauty, acting as avatars of exposing our own self-image to public scrutiny and the distortions that this brings about.

That Oliver is able to get away with telling a story that introduces us to over 12 characters with problematic and complex relationships with each other tells us a lot about his narrative capabilities as well as his talents as an illustrator. As the only author of this book, he is able to apply his skills as a designer and his expressive handling of color to create interesting page layouts. He can push the genre’s pop exuberance to the limit with panels that alter drama and dynamism, to both express each character’s unique characteristics as well as setting moods throughout the stories. Los Potenciales is also a decidedly queer work of art, which attempts to tackle the hegemonic construction of the superhero as an idealized and perfect entity fitting neatly within the aesthetic canon of heteronormativity in a time where we are swimming in “fit model” social media presence featuring “inspiring” platitudinous slogans about happiness while also resulting in an elevated depression rate from spending too much time on Instagram.

This title isn’t just available online (*wink you can read the whole thing for free *wink) but it was also compiled in comic book format by Szama Ediciones, who are building a catalog of work that features other “superheroes with a twist” comics such as Ser super (Fernando Calvi) or Rondador y Nocturno (Martín Tejada and Mariano Taibo).

On the other hand, La Extraña desaparición de Barnabas Jones (“Barnabas Jones” from here on) is the latest title by the up-and-coming editorial group from Cordoba Deriva Ediciones, which features the dying breed (within the context of independent comics) of an authorial partnership, with Damian Conelly as a writer and Kundo Krunch as illustrator. Connelly is a peculiar case of an author that has managed to not only be prolific in his production in the last few years but has also been able to work with different illustrators, with the gift of knowing when to pick the correct tone for each partnership. His stories tend to alternate between the dark police procedural and chaotic science fiction, and Barnabas Jones works as a good blend of both approaches.

Set in the year 2040 in the strange city of Godard, the disappearance of Barnabas — the local messiah/rock star in the city — sets the plot in motion. Anima Riot, the neurotic protagonist of the story and leader (by sheer capriciousness and impetus) of a group of outcasts with a variety of powers, takes on the search for the title character. They head into a world of adventure and chaos. This comic book sometimes feels like a Guy Ritchie film in a world governed by the laws of science fiction as applied to Rick and Morty, through the lens of rock-star culture.

In the multiverse that these heroes traverse, there doesn’t appear to be a god. And if there is one, it’s a type of cynical bastard. Like that mantra coined by Burroughs, “Nothing is true, everything is permitted”: from the pages of this comic emerge clones of Elvis Presley who want to take over your brain, Necromancers, giant voodoo dolls, talking guns, and scientists that transport you to other dimensions without provoking even a single look of amazement by any of the characters.

This is all possible thanks to the graceful illustrations by Kundo Krunch, whose style appears simple at first until one realizes the complexity and scope of his compositions. His work on Barnabas Jones works perfectly to create that urban-futuristic-trash atmosphere. With a reduced color palette and an expert handling of grit, he builds action-filled scenes that are littered with frenetic changes, befitting the group’s quest to uncover the bizarre mystery behind the title character’s disappearance.

This comic serves as a testament to the punk take on genre. Less interested in creating rigid scientific fictions or establishing moral conflicts associated with power as applied to strange technologies, more concerned with cramming as many scenes as bizarre as they are entertaining into the story. We won’t come out of it with a lot of answers. Perhaps to find Barnabas is the same as losing him. Is there a God? Does he wear slippers? What matters in the end is the power of the image and the story in service of a wild imagination in this 100+ pages tour-de-force through Godard and its alternate realities.