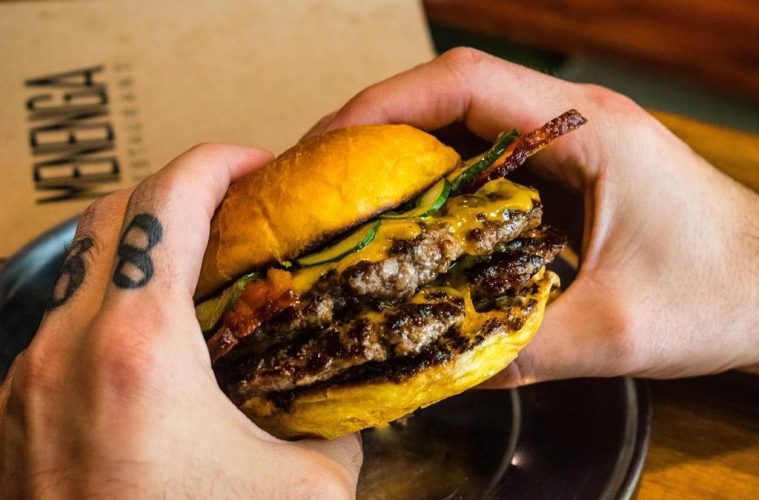 It has been almost a year exactly since the first time I visited and reviewed Menenga, a fresh take on the old cantina in the middle of Caballito. I have revisited countless times, tried everything on the menu and even cooked alongside owner and head chef Nicolas Gonzalez at a monthly-ish Argentine-Korean-Mexican-North American hybrid pop-up.

But it wasn’t until I sat in a packed house on this last Saturday that all the pieces came into focus.

The dining room was slammed and brave diners fought the chill and crowded around picnic tables outside. A small line was never absent from the front door. The orders were stacking up with nearly 40 guests for a cooking team of two, who also bus, wash and dry. Without a word, Nicolas’ parents, Alicia and Marcelo, marched in. He took over the till while she grabbed plates and started washing. His partner, Euge, and younger sister, Sofía, commanded the masses. All the while Nico furiously flipped burgers and fried up rib eye on the grill alongside his cousin, Marcos.

Many restaurants have opened in the last few years under the moniker of nouveau bodegon. But the main ingredient, a tangible sense of community and family, was always missing. At Menenga, it is rolled on thick like butter but done so in earnest rather than as a passing hashtag.

And in the last year, the restaurant’s foundations have settled. Menenga got its start as Arengreen, a closed door burger joint in his parent’s patio. That opened the doors to Menenga, housed just around the corner from his childhood home. Gonzalez introduced a set of bodegon-style dishes with the same attention to fatty details as the internet stylings of Action Bronson or Alvin Cailan.

An Everest mountain of grilled sweet breads over creamy fresh corn capped with a single crunchy slice of bacon. Or the now infamous, for me at least, ribeye with extra garlicky mashed potatoes. The burgers have tightened in style: they are simple, homey and amongst the closest to a North American diner-style burger in the entire city. No more than three ingredients make up most of the selection–try the tempura pickle and ranch. All are stacked on cabutia buns, soft and bouncy like a tempurpedic with just a touch of sugary sweetness.

And as the customers have become more comfortable so has the kitchen, or maybe viceversa. The proximity of Flores’ extensive Koreatown has creeped onto the menu. Try a pork shoulder milanesa with homemade kimchi or fried popcorn chicken dunked in honey and gochujang. Wontons stuffed with rib eye and onions cooked down to a satin are fried extra crunchy and served with hot sauces and salty soy sauce. Nearly the same filling is served in empanada form with a dough that bubbles up and screams loud lardy flavors.

Menenga celebrated its first year just last month. There are dreams to continue opening up places in the hood. Fingers crossed they do.