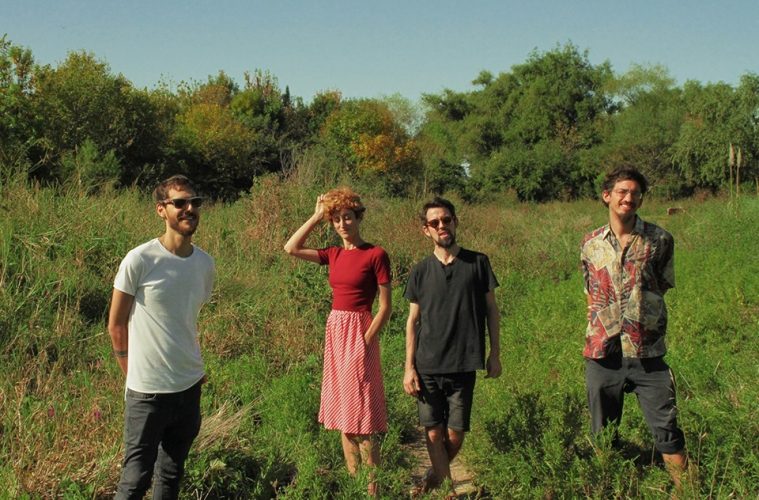 As with every month, we are back with a brand new selection of recent songs we’ve fallen in love with. As you might know, the Argentine senate recently approved the “Ley de Cupo”, guaranteeing a 30% female representation on festival stages; a small but significant corrective measure meant to increase opportunities and exposure for female musicians. By sheer coincidence, our list of selected tracks this month are largely lead by female singers. We didn’t need to meet a senate-approved quota; the most interesting and noteworthy music of the last month happened to heavily feature women. Check out our list below!

Paula Maffia’s LP Polvo is one of our favorite recent releases. Take its fourth track “La Espesura”, for instance, and you’ll notice how the thumping bass line and drums complement Paula’s crooning voice and infectiously almost-funky guitar. The song goes down a dancier path once the drum groove changes, only to turn what was a forlorn cry into a layered tapestry of voices that Paula so elegantly phrases in her lyrics: “para que no me dejes en paz y no me arrastres en la espesura”. What initially sounded like a plea mutates into a tango-esque roar as the track reaches its climax, replacing its dancy vibe with an anthemic breakdown that fades as the last twinkly guitar line bids this empowering song farewell. After listening to this effort one thing is for certain: rock is not dead, and we’ve got this new wave of guitar-driven pibas to thank for it.

Lucy Patané – “Ya No Quedan”

Speaking of great albums. Track 9 out of the 12 perfect songs in this punch-free record (where “punch” refers to artificially-enhanced Pro Tools tinkering, not to be confused with the punch in the heart and the senses, which this record totally is). It comes alive with such strong credibility and such a fresh sound: Mind-blowing layers of vocals, deep but airy (yes she makes this happen) drums, distorted riffs and feedback, just to name a few of the elements that build up this perfectly engineered mass of sound: wide, present, and so very strong in its intentions that you can literally feel it resonate inside you. One of the many places where Lucy has been; places she has turned into music and now hands over for us to keep.

We’ve been waiting for a single from our favorite freak-folk band since their 2017 EP. Recorded in the fall of 2018, this is the first new track Los Aullidos has released since joining the music collective Lagunera Discos and adding a fourth member to the band. The single features soft drums, striking guitar chords, and a touch of synthy goodness. Notably more mellow than their previous psychedelic-folk-rock licks, its softness is a nod to their genre-bending capabilities. Returning to the chorus every two minutes, the stunning voice of front-woman Maria Morillo singing “the good times and the long days,” will leave you in retrospective contemplation well after the six minutes are over. And as both the brains behind the song and the album art, here at La La Lista we’re falling more in love with her each day.

The most exciting thing about this release is getting to hear Jazmín Esquivel’s current accompanying format captured on a track. If you’ve had the good fortune to see her perform live with the full band within the last six months, you’ve without a doubt been blown away by the total aesthetic departure from the folky renditions of the songs as recorded on Púrpura, her previous release. This single is a much more accurate representation of what she’s been bringing to the stage recently – an overwhelming sensuality and intrigue; a mysterious kind of darkness that calls you to enter it. Sonically and lyrically it is immensely powerful, but also intensely emotional, with an undeniable vulnerability. This song speaks about that: a woman so powerful that she allows herself to be vulnerable despite knowing full well that in doing so she puts herself in a position where she can be stabbed in the back. She’s not afraid of pain. Y se deja clavar el puñal en la espalda.

Antu La Banca, drummer and singer of the band Nunca Fui a Un Parque de Diversiones, returns with a new single from their solo project Antuantu. A few beats of helicopter-esque percussion, a touch of icy piano, and then a robotic voice intones “En realidad, yo no soy asi, no soy una robot, que no siente nada…” While the vocals are always autotuned, they switch off with a breathier, more human version of themselves throughout the song, which swerves along with a warm and woozy R&B feel.The lyrics are short and sweet, but they make their plaintive point: when it comes to new infatuations, maybe some things are better left unsaid.

Led by Chascomús native Juan José Bordenave, Costas’ real triumph is making music that’s hazy without sounding unfocused or vague in its intentions. On their last single, the slacker-pop-meets-synthwave ‘Armonía’, a slightly out-of-tune foggy guitar chord sequence gives way to electronic drums and bass that gently propel the song forward while keeping it grounded. After an instrumental interlude, a hypnagogic guitar arpeggio drives the song home over waves of washed-out synths and cascading melodies, leaving the listener in a daze that will linger long past the first listen.

After a string of releases, including the 2017 EP Mes, singer-songwriter Carolina Donati comes to us with her debut full-length album: Lo Que Quedó, a collection of thoughtful, elegant songs that trace the contours of infatuation, romance, and the ever-shifting dynamics of a relationship. “Premonición” is track two of this collection, and it comes at you with a sound that is simultaneously urgent and tender, with waves of reverb-laden slide guitar washing over its main refrain as Donati counts off elements that bring about this surging rush of emotion: a glass of wine, a hint of perfume, a single guitar chord, the anticipation of a name spoken. It all builds to a climax where a frenzied guitar line accompanies the epiphanic realization of the line “dejarse querer” (to let oneself be loved), and, as quickly and urgently as it kicked off, the song comes to a sudden halt.