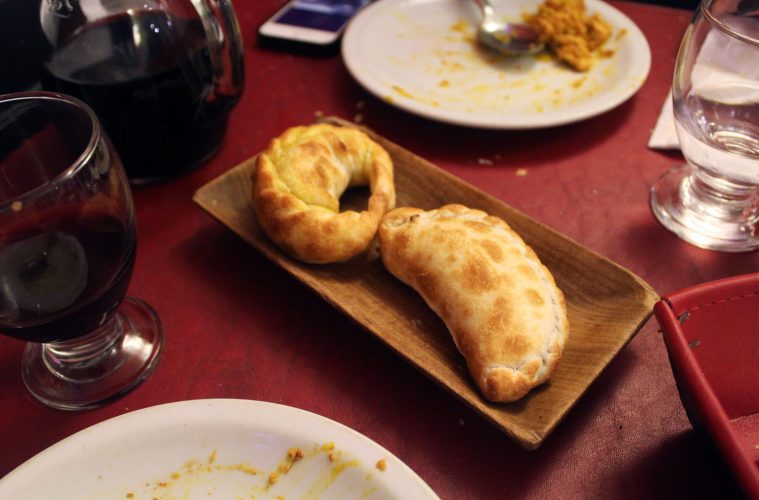 A half a dozen empanadas zoom past my face on hollowed out wooden platters: curled comfortably into circles like a cat nap or twisted and tied like Wednesday Adam’s french braids. A mosaic of char clings tightly to the dough that has puffed like a barreled-chest and clearly denotes them as the oven-baked variety. They come bite-sized with prices to match—there are two cheap first dates at the surrounding tables.

At Fortín Salteño, a restaurant staple in Nuñez, the people eat empanadas. And the choices present a crisis of existential proportions. Seventeen empanadas dot an already extensive menu which also includes Porteño-style pizzas and Salteño-style cazuelas, locros, tamales and humitas. Choosing the locro means forgoing the tamal and hitting up the chopped beef empies might mean sacrificing the ricotta and walnut – but we can’t have it all.

An oddball cheeseburger feels sacrilegious, like a betrayal to the brightly lit neon sign outside that tells you this is a Salteño fortress from three blocks away. Ignore and proceed ahead.

The restaurant is one of few to focus on Northern Argentine cuisine. La Santa Evita comes to mind—although the Peronist restaurant is more Argentine gourmet than Salteño specific despite chef Gonzales Alderete Pages being a Salta native. Ña Serapia is homey and heavy on the dingy bodegón vibes. The Jujeño La Paceña is decidedly rustic with a more faithful approach to their Andean empanada selection. The rest are often restaurants flooded with Andean memorabilia and menus with just a single offering or two of dishes that fall outside the porteño palate.

Start with the empanadas. Skip past a forgettable spicy beef—there are clear notes of a vinegary rocoto pepper but the broth is underwhelmingly tame even by local standards. A aptly named choclo, not to be confused with the often misnamed humita, is a step in a better direction. There is a respectable corn to cheese ratio and the aforementioned queso isn’t the typical cremoso. It is dense and chewy with just the right amount of grease sweat. The ricotta and walnut is basically a ravioli with a different dough—and I´m all about it. The ricotta is cloudy without being overly runny and walnuts pop like a mine field. I tried the provolone by accident—the waiter knew better than we did—it tastes like a baked provoleta ripped straight off the grill.

There is also densely flavored cazuelas: a tenderloin and fingerling potato or chicken with pumpkin will wrap your gut like a warm blanket in winter. For something smoother, the pastel de carne feels like a visit to grandma’s house. A punch of salt and spice would do it some good, though. Wash everything down with a pitcher of red house wine. To finish, skip the typical flan and budin de pan and grab a vigilante—cheese stacked on a thick slice of jellied fruit. Mamón, a citrusy fruit similar to a papaya, is a glorious choice.

I haven’t gotten through half of the empanada options—but I want more.

Price per person: $40 per empanada; $350 full meal with wine and dessert