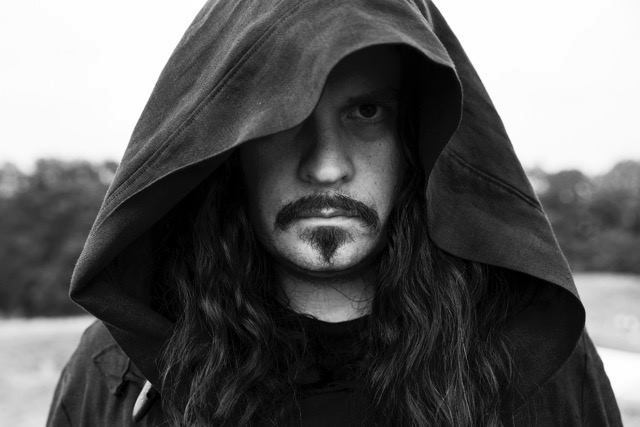 Like other bands that play at high volumes, such as Swans, Lightning Bolt, and Neurosis, SunnO))) demands a certain dedication from the listener, both physically and mentally. But at Stephen O’ Malley’s show in Almagro last Wednesday, the cause-effect relationship became more direct. Even though the guitarist makes up 50% of that band, once he turned off all 7 amps he employed to bathe the audience in drone, I felt like an electrocuted insect, like I’d just been disconnected to a frequency.

In fact, it didn’t bring to mind any other show in particular, but that time I saw Ron Asheton standing on the sidewalk in Colegiales when he was in town with Iggy & The Stooges. Not The Stooges’ music, but that mental jab I felt when I caught a glimpse of that round face wearing a Ziggy Stardust t-shirt. Thousands of microscopic insects surrounded his Ray Bans in a bloody battle. But Asheton didn’t mind. He smiled slightly. He was the musical equivalent of a war veteran.

The day before the show, Stephen O’Malley spoke about Life Metal, the band’s latest album. “I don’t know how it relates to our previous work,” he said. “An album is a story being told in the present and all that matters is that story. It’s weird releasing albums because, from the outside, they may look like individual pieces, but I see it as something very close to playing live, what you’re going through at that time. But I don’t think there’s anything more relevant than the present.”

Stephen O’ Malley gets ready to talk to Depósito Sonoro in a hotel lobby, starting with a few Black Sabbath stories: “I could tell some stories, so many, at least a couple. I think they’re my favorite band. Once, we played in Roskiljde, in Denmark, and the lineup order was Sun O))), Slayer, Isis, and Sonic Youth, with Black Sabbath headlining the festival. We got really high after the show and we got to the side of the stage, right next to Geezer, while they were playing for 80,000 people. We were really high. It was an amazing experience, also because we could see the guy that plays keyboards offstage.”

Do you think the status of ‘unofficial member’ is unfair?

I don’t get why they do it but it’s so old school, it’s almost charming. I think the first album in which he was featured was Sabbath Bloody Sabbath, from 1975.

Sunn O)))’s shows are very intense. Some audience members even faint. Do you enjoy that?

It’s not supposed to be that aggressive or painful, but that physical reaction is interesting. However, I like those stories and how they spread. If you play a festival in countries like England, people like to get drunk and get high a lot and somehow it’s a shame, because you miss the show. A little while ago, in France, a guy collapsed right next to our sound engineer. They took him out in an ambulance. He got in a fight with the paramedics and came back to the show only to collapse again. I don’t relate to that from a power stance – it’s a another type of experience, with another depth. I like the myth, though.

How are your days off touring?

A little while ago we went to a basketball game in Chicago. Our friend Tim is from there, and Steve Albini got us really good seats. In the end, it was full of bankers in suits and they played a lot of punk. Steve said: “They would’ve never played The Clash when they were a thing and you will never hear Killdozer at a game”. Five minutes later, they played “War Pigs”. It was nice to hear that song, those lyrics.

What do you think of Lou Reed’s line “my week beats your year” from Metal Machine Music?

I’m vaguely familiar with the concept, I think he wanted to ditch his record label. I think it’s a little aggressive.

Do you understand music as something to be differentiated between sub-genres?

I was never that kind of person. I didn’t have to set myself apart to fit into a category or a genre. It’s a word that’s used a lot in English, but it’s more related to gender. It has a biological sense, very different from style, that isn’t as separatist. I never felt part of a scene, like “I’m in a Doom band”. That’s why I had the chance to collaborate with lots of different people.

One of those people is Atilla, from the Norwegian band Mayhem. What was it like to interact with someone from a band you admire?

In the early 90s I was a big fan of Black Metal. I had a fanzine and I made designs for bands like Burzum, Mayhem, Emperor. I met Atilla because I traded tapes with his tour manager. Well, at least he said he was. Sometime in ‘97, I went to Hungary to try to meet Atilla and I didn’t make it but we finally did an interview for my fanzine and I edited his band Tormentor. He got on board because he liked Current 93 and it reminded him of that. The collaboration started as a fan’s journey.

A very different one was Scott Walker. How do you work with a singer whose vocal presence is so strong?

He’s a teacher. When we worked together, he was 70 years old — he’d been making music since he was a teenager and recording since the ‘50s. It was incredible to work with him because he had gone through all his highs and lows before I was even wearing diapers. His band was bigger than The Beatles and The Stones, and then they crashed. Towards the end of his life, he became an experimental composer. I sent him a tape and he replied: “I don’t like the music you sent me but I’ll work with you guys.”. When Scott curated Meltdown Festival, he invited Fuckhead, a noise band from Vienna. He was a great influence in our career. Whenever he didn’t like an arrangement, we’d leave it up to him. Finding him was very important in my life, he was very friendly with us.

He only let the recording engineer be present when he sang, but we did work together on the production of the album’s sound.

During an interview, you compared grindcore to free jazz. What’s the connection?

I believe if you listen to grindcore without having listened to hardcore or punk first, it does sound like free music. It can sound very similar to Albert Ayler. But it’s not free music, it’s punk. However, both God, Kevin Martin’s band, and Napalm Death joined an experimental music community. That was a very interesting step.

What are your music’s limitations?

I don’t know if they’re obstacles but I am limited by my capacity. I can’t write like Stockhausen, that’s an obstacle. I can’t play like Eddie Van Halen. In fact, I don’t think I’m very good on the technical side, but I don’t see that as a limitation. You can always take risks. Once your band becomes your job, the equation for taking risks becomes very different.