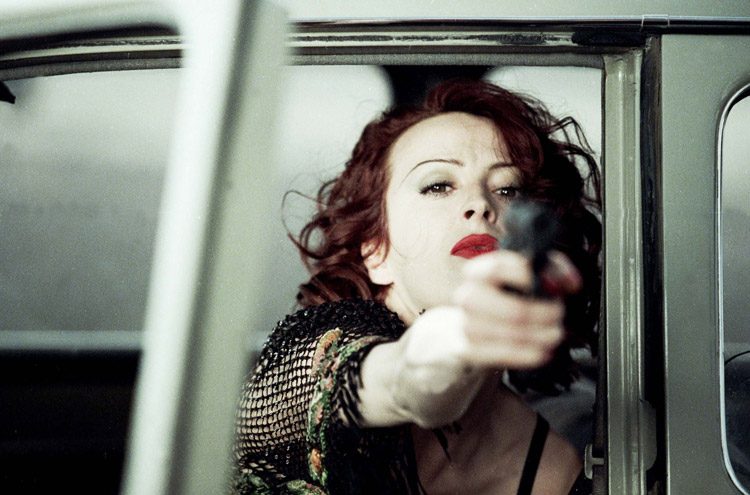 April withers away in the rearview mirror as time trudges ever cruelly forward. And as such, a brand new installment of Off the Marquee is here to tell you, lucky readers, about some of the best, most interesting, most off-the-beaten path cinematic experiences you can attend in the city of Buenos Aires. We’ve got an interesting line-up this week, featuring various disparate tones and sub-genres, so let’s go ahead and get right to it.

MALBA theater is hosting a weekend-long retrospective highlighting the strange and wonderful career of cult filmmaker (as well as writer and musician) F.J. Ossang. Not only will you get to watch the five feature films he directed (9 Fingers, Dharma Guns, Doctor Chance, Treasure of the Bitch Islands, and L’affaire des divisions Morituri), but you’ll also get to have a conversation with the man himself, as he will be in attendance.

Truthfully, I’m kind of a sucker for any movie that features the word “perros” (or “dogs”) in its title, regardless of the fact that they usually have very little to do with actual dogs (I’m looking at you, Reservoir Dogs). This time around, we’re looking at a pensive, gripping thriller with dark horror undertones and — yup, there is a dog in the trailer. Just one, though, hardly the plural that’s promised by the film’s title. In any case, this looks like a beautifully-shot, artfully perverse piece of filmmaking, so I’m certain it’ll be worth watching regardless of the false advertisement in the movie title.
Showtimes and further information

Gran Orquesta was one of the treasures from this year’s edition of BAFICI, Gran Orquesta is a documentary about the discovery of an old vault containing the sheet music for one of the biggest and most important Big Bands in 1950s Argentina, Héctor y su Gran Orquesta de Jazz. Featuring the great Sergio Pángaro, the film is about the thrill of creation, and a touching tribute to a bygone era.
Showtimes and further information

Cinema is absolutely littered with movies about dudes who grow fed up with the way their lives turned out and decide to make a radical change that raises everybody else’s eyebrows. This movie is… more of that! But hey, we can boil down any movie to the bare bones of its premise. A movie is more than just its plot, and even though this comedy treads familiar waters, it gets by on its undeniable charm. So even though this is a story that feels familiar (Mariano quits his corporate gig to open up his own kiosco, running into all kinds of problems) there’s a lot to love about this quirky little movie, its legitimately endearing cast of characters, the way the story unfolds, and the many laughs along the way.
Showtimes and further information

… and keeping with the themes of both “dudes who give up their lives to make a huge, counter-intuitive change” and “the lives of retail employees”, here we have a story that takes us across the globe. Facundo’s father used to have a supermarket in the mid 80s, which had to close down when Chinese supermarkets started popping up in Buenos Aires. Today, Carlos decides to travel to China to open up the very first Argentine supermarket. Part screwball comedy, part fish-out-of-water story, part melancholy rumination on culture and heritage, this film is a truly peculiar piece of work that is more than worth watching.
Showtimes and further information

This film by writer-director Juan Pablo Sasiaín thrives on small moments. Stolen glances, little conversational turns of phrase, seemingly unimportant anecdotes tossed off with the comfort of familiarity. It follows the story of a roaming artist, Martín, as he returns to his home town in the mountainside and reconnects with an old childhood friend. This coincides with a particularly tumultuous period in his own personal life, and difficult choices must be made.
Showtimes and further information

And here we arrive at the best film title of the month. This is a straight-up horror film from writer-director Alejandro Fadel. The decapitated corpse of a woman triggers an investigation into a series of mysterious disappearances, which are at first blamed on Cruz, who is sent to a mental institution. But was it Cruz? Or was it a supernatural monster? Or could this all be a metaphor for something else?! I dunno, man! I haven’t actually seen it yet! But it looks creepy, and you can’t go wrong with that title.