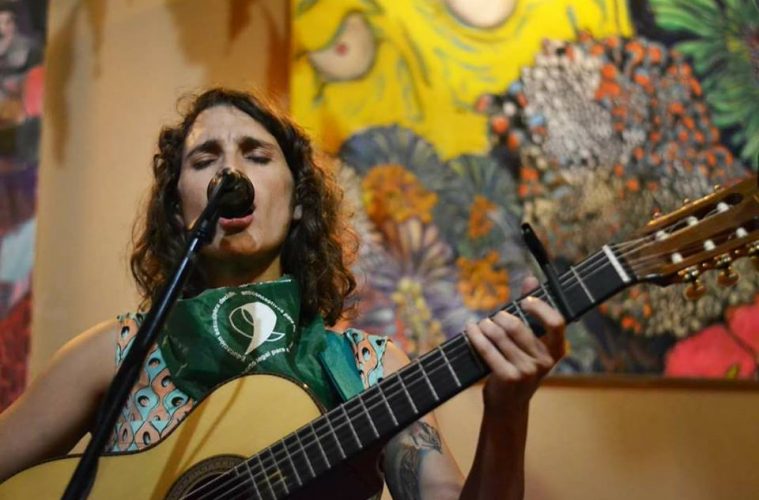 I got really excited when our Monthly Music Roundup came out on Monday. It’s a new thing we’re doing, where each La La Lista staff member chooses one local music release from within the last month, and chooses one song from it to write about. If you read the article and listened through the selected works, chances are you were left feeling a bit manija to see those artists live. Well, you’re in luck! At least three of the six artists that made the list already have shows on the calendar in Capital this month, including Medalla Milagrosa May 11th at La Confitería, Camionero May 18th at CC Richards, and Melanie Williams y el Cabloide May 25th at CC Richards, and we’ll make sure to let you know if any others are announced throughout the month. In the mean time, here’s our lineup for this week:

May is here, and with it another edition of Circuito de la canción, the ciclo where songs connect with each other, and connect with listeners, and connect listeners with listeners (wow, there’s a lot going on here). Los_subtítulos, the dark psychedelic-y post-rock group whose EP (titled Ep1) I binge-listened to for two weeks after seeing them live for the first time last year, is playing. They’ll be joined by alternative power-trio VŪMETRO and Alejandra Caballero Rojas, namesake of the indie/electronic experimental band Caballero Rojas, featured in the video above.

Friday night at La Tangente: Atrás Hay Truenos will be coming at us with their aesthetic of choice – the soothing sounds clouds and chainsaws, and Ex-Colorado will be building up a dreamy kraut rock wall of guitars and analog synth sounds. Don’t let this one pass you by. You can get tickets in advance online by clicking here.

Batata Project is a jazz and rock fusion group that formed in 2016, combining the different musical approaches and backgrounds of the now five members who make up the group. They will be playing this Friday in this genre-bending event with math rock/emo group Kurí. Both bands promise to fill the night with complex rhythms, colorful melodies, and many surprises.

Welcome to Habbo party: a spectacular all-night techno party organized in part by one of La La Lista’s very own staff members, the beloved Tamx. For this special edition, it advised that you come dressed in your darkest darks (but also, a black t-shirt and a little bit of eyeliner goes a long way!) and ready to dance like it’s zombie prom. Live performances will include local techno artists Ann Lee, elixxr, and Emma Harumi, with visuals by Aliena Tropicae. Warning: Habbo party is not a safe place for machos, fascists, or LGBTQIA-phobes. Any act of assholery will be resolved in the moment, without fear of consequence.

Centro Cultural Richards will be hosting the very first edition of afro-funk/disco festival Fiesta Comba, this Saturday. There will be live performances by DJ Chebo, Selektor Pappi, and UYUYUY (lesser known alter ego of FonsiFonsi and Elbandrio). The event will begin at 9 and end at 3am (so that you can finish up your night reasonably early and enjoy your Sunday having had a GREAT NIGHT).

JJ Circuito Cultural will be invaded by feminists this Saturday, and they only want two things: gender equality, and for you to listen to the sick split that they just put out. The split (and presentation of said split) will feature four bands: Todos Los Problemas, Querida Dária, Brishit Bardo, and Las Fantoms Fntm. They made it because they believe in the transformative power of art, they believe in words and music as tools for societal deconstruction. If you also believe in these things, you should come out to support their efforts, and hear them play awesome music.

D I L D A is a feminist festival (lots of feminism on the agenda this week, I can get down with this) featuring music and bands that bring cis women, lesbians, and trans* folk to the stage. This edition will feature artists Susi Pireli, Mana M. Isla, and Solentina, with DJ Lastbeats rocking the house between sets.