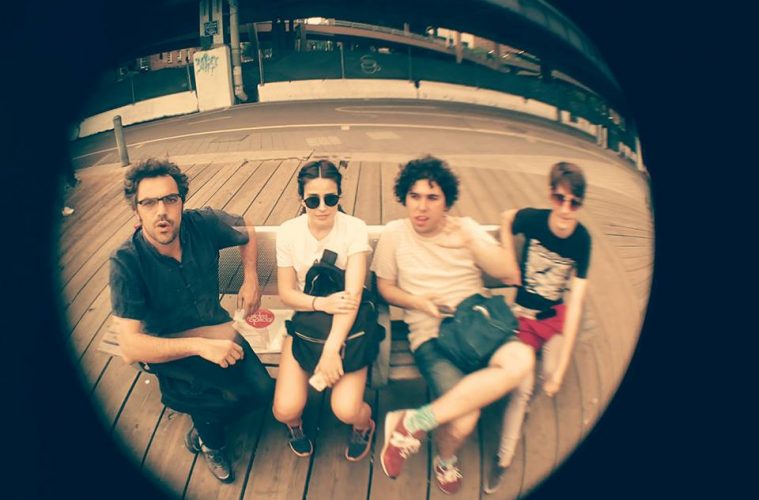 Kokoshca, on tour from Spain and playing this Wednesday in Niceto with Las Ligas Menores

Today’s intro is a haiku:

Here’s our lineup for the week:

Las Ligas Menores are playing tonight on the Malba museum terrace! They will be accompanied by Kokoshca, an indie pop/rock band from Pamplona, Spain, whose discography dates back to 2008. They are currently completing their first Argentinian tour (funded by Levi’s jeans), and will be playing two more shows in Buenos Aires and one in Rosario before heading back to Europe. You don’t want to arrive late to this event, because it WILL start on time (well, so says the Facebook event). Also, your $200 ticket comes with two complementary Gordon’s Gin drinks!

Bandalos Chinos at Niceto (Lado A)

After playing the Vive Latino festival in Mexico, and while they continue to present their latest release, BACH ,throughout Argentina, Bandalos Chinos is making a special stop at one of the venues that has been there to watch them grow over the years: Niceto Club. You can get advance tickets online at this link.

Inspired by the revolution that lives in independent local music, journalist Yumber Vera Rojas joined forces with Niceto Club to create a sonic, cultural, and tribal laboratory of weekly experimentation: the Indiefuertes ciclo, which celebrates its fourth season this year. This edition will feature the (adorable) teenage duo Alejo y Valentín, who have been making music together since they were only ten years old, and are playing for the very first time in Buenos Aires this Thursday, along with singer-songwriter Facu Tobogán (of Tobogán Andaluz). You can get your tickets online at this link.

They’re friends, they share the same record label, ideals, beers, experimental sounds, and iconoclastic pretensions…and they’re playing together for the very first time, this Friday at La Casa del Árbol: Los Aullidos and Marton Marton. Los Aullidos is a Buenos Aires band that explores rock and psychedelic folk. In a few months they will be releasing their second EP, El silencio como un rugido (Silence like a roar), under Lagunera Discos. Marton Marton is the multi-faceted alter ego of Martín Villulla, a musician hailing from Chascomús and currently residing in Buenos Aires. They recently released a single (also under Lagunera Discos) called Tos de la perrera/Pampa, and their next full album is set to come out this June.

Ciclo Abanico is open. (Abanico = fan.) (Like the analog kind not the electric kind.) It’s here to give you some air. Curated by Hey Sheriff, this ciclo seeks to unite, in one single night, distinct alternative artistic expressions of Buenos Aires. This Friday at Casa Dasein marks the very first edition, and will feature performances by Emily And (it’s me!), Hey Sheriff (in their new experimental format), and Walfer. While enjoying the cool breeze of great music, you can also take in photo exhibits by Ornella Scatena and Miss Aborto, and works by painter Malena Silveiro.

Lxs Tremendxs are finally playing in Capital again after a six month break (well, not really a break – they’ve been working on a new album). They chose to play in Roseti, one of their favorite places, for its buena onda and delicious food and drinks. The stage will be set by Ceci Fernandez, and Invernaculus, a band from Rosario that Lxs Tremendxs recently became fans of after seeing play live, has been invited to open the show.

Ah, POMO. Whether you loved or hated the place, one thing is certain: it was always there for you. Until now. Yep, the little dive in the little alleyway near Plaza Serrano, which in every Facebook event description claimed to have the best sound in the city (a claim reminiscent of PBR’s “finest beer served anywhere” slogan), where we could always play for free, is closing. Word on the street is that the owners are moving to Spain. Anyway, there’s going to be one last POMO throwdown, featuring live music from Yuli y Tonga and El Gran Búfalo Blanco. Come on out and together we’ll ring in the end of an era.

Come on out to the coolest punk venue in town, conveniently located in Palermo near the two across-the-street-from-each-other Kentuckys (Kentuckies?), for an awesome party this Saturday night. Surfy/ new wavey trio Excursionistas will be playing, along with garage rockers Los Peyotes, and garage bluesers (If people who play rock are rockers, people who play blues are bluesers, okay? Just let me have this one.) Gualicho Turbio.