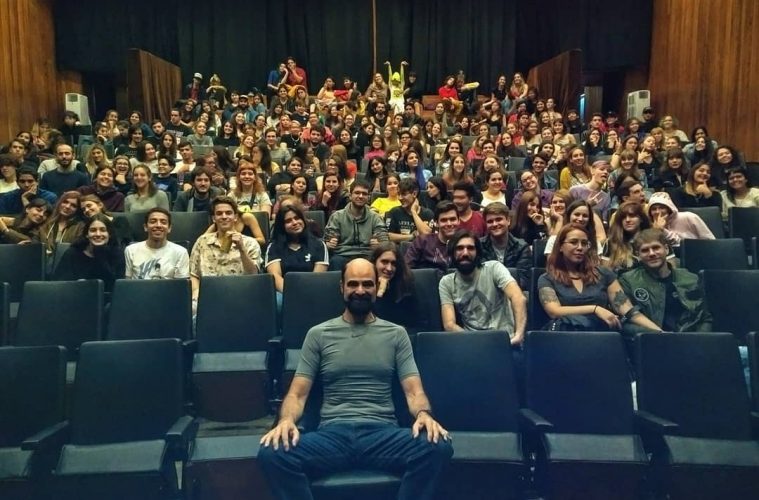 Update 30/7/2020: In the time since this article was first published, Hugo Zuccarelli has gone public with numerous virulent and inflammatory remarks that would have caused us to rethink our decision to cover him, or his project, in the first place. La La Lista prides itself in platforming creators who enrich and elevate the cultural scene of Buenos Aires, not only with their work but also by creating community and uplifting each other. In the interest of transparency, we present the article as originally posted, and leave the decision of whether to patronize such an odious bully up to you.

Hugo Zuccarelli is standing directly above me, waving a set of keys around my head. This is the third time over the course of our ninety-minute interaction that he has asked me to sit in front of him with my eyes closed. This time, he is demonstrating his theory of localization by having me guess where he’s moving the keys while I cover my left ear. I feel relieved after guessing correctly, like I just passed some sort of test. Zuccarelli hands the keys back to the bewildered stranger on the table next to ours and sits back down.

These kinds of moments aren’t unusual in conversation with Zuccarelli. As the creator of holophonics — a binaural recording system that represents a radical take on how sound is perceived and imagined — he is used to performing live demonstrations of his theories on the regular, displaying a genuine passion and enthusiasm for it. And as the host of the Parlantes Holofónicos show at Auditorio Kraft (Florida 681), where he plays entire albums in a pitch-black stage through a set of specially-designed 16-foot-tall speakers, he bookends each session with an off-the-cuff presentation that comes across as a mix of a Ted Talk, a medicine-show sales pitch, and a comedy routine. There’s technical jargon, yes, but he’ll also throw in a healthy amount of endearingly groan-worthy dad jokes. There are equal parts pedagogy and theatricality in his approach, with a little bit of mad scientist poking through.

“I almost consider myself a stand-up comedian,” Zuccarelli tells me as he leaves the stage. “The best way to explain this technology is by showing it, but the audience also needs the context.” As soon as he is done with his intro, lights go off, and the music starts blaring out.

As Zuccarelli explains it, the conventional approach to loudspeaker technology is to separate frequencies into different components: woofer, tweeter, mid-range driver. These different parts are especially engineered to reproduce a specific range of frequencies. Zuccarelli contends that this separation will inevitably result in redundancies which give way to distortion and a muddled soundstage. By playing all the frequencies together in a massive speaker, he says, you can get a sound that is clearer, deeper, and more true to the sound of live instruments.

Sitting in the middle of the Auditorio Kraft as an album blares out through Zuccarelli’s speakers, these claims ring true. Listening to entire albums through these speakers is a wonderfully immersive experience, especially when played in total darkness. Revisiting an album I’m deeply acquainted with — like, say, The Cure’s 1989 masterpiece Disintegration — feels like going for a swim in a lake you’ve only ever looked at from a distance. It reveals dimensions of detail and nuance that you never knew existed. The sound is massive, but never overwhelming. Instead of a blown-out mess, you get remarkably crisp and clearly-defined instrument separation. During our interview, Zuccarelli demonstrated his technology with some tracks from Metallica’s Black Album, and I was awestruck by how the snare drum sounded like it was being played right in front of us.

The albums Zuccarelli chooses are quite eclectic, ranging from The Beatles to Billie Eilish. “We play albums that benefit from this technology,” he tells me. “Daft Punk, Gustavo Cerati, Queen…  When we play Spinetta’s Artaud, people leave the theater in tears, because it’s almost like he’s sitting there in the room. You get a lot of detail. To me, the album that works the best on these speakers is Dark Side of the Moon. There’s also a lot of theatricality in The Wall, which works really well in this format.” Zuccarelli’s fondness for Pink Floyd is evident. He collaborated with them in the early 80s, using his holophonic recording technique to contribute sounds to their 1983 album The Final Cut.

The Parlantes Holofónicos show at Auditorio Kraft is the only place in the world that currently uses Zuccarelli’s speaker technology. “We’ve been doing it for eight years,” he says, referring to his albums-in-the-dark program. “We did it for some time at the Teatro Ciego. Then we went through a few different places… Vuela el Pez, the old Abasto theater, Uniclub…  before eventually settling in Konex.” Zuccarelli winces a bit when he mentions this last venue, former-factory-turned-hipster-enclave Ciudad Cultural Konex, where his speakers lived for almost two years. “We had a very bad experience with Konex. In fact, after we parted ways, they continued with a program that’s just like ours, music in the dark. I would call that plagiarism. But they don’t have my speakers. That’s basically fraud. You can’t have a show like ours for two years and then replace us with inferior technology. People will feel ripped off.”

I find it peculiar that Zuccarelli’s technology was never implemented in any mass-produced system, and that the only place in the world that currently showcases his speakers is this tiny theater in Buenos Aires. “I was victim of envy and racism,” he maintains. “I invented this technology at 21 years old, and I was an Argentine living in England during the Falklands war. I ended up having to tell a bunch of old farts that they were all wrong. I’d go to the BBC, to the universities, and tell them to their face that they’d been perpetuating a hundred-year mistake. They didn’t like that at all. And then it got even more complicated when Prince Charles had invested a huge amount of money on a multi-channel system that sounded awful, and he wanted us to partner up.”

“I’m not going to share my invention with something that sounds horrible. People deserve better.”

The validity of Zuccarelli’s claims regarding holophonics — particularly his understanding of how the ear works and the way our brains interpret it — has been a point of debate within the scientific community. There is little to be found in terms of in-depth analysis online, as the debate seemed to have occurred in print decades ago. The main point of contention is Zuccarelli’s claim that otoacoustic emissions — meaning sounds generated from within the inner ear — play a role in sound localization, and must be taken into account if one wants to truly capture a binaural recording that simulates spatial cues. I lack the scientific knowledge to confidently assert that Zuccarelli’s speakers sound as amazing as they do because they are engineered to faithfully reproduce holophonic sound, or simply because they are gigantic speakers playing loud music in a darkened room. I can only speak with any kind of authority of my own experience with them. And my experience tells me that I want to listen to every album through these fancy science-speakers.

“I wanted to make something amazing,” Zuccarelli says, a bit of wistfulness creeping in his outwardly cheerful demeanor. “They didn’t care. They didn’t want it. I’ve had it for 30 years, and nobody uses it. It’s like how they’ve had the cure for cancer since the 1930s, but they keep poisoning people with chemotherapy.” Sharp left turns are also a constant in conversations with Hugo Zuccarelli. Enough to give you whiplash.

“But there I was, 21 years old, entering a world of crime and drugs — a world where nobody cared about sound quality, because they just wanted to keep the kids doped up. Drugs and rockn’roll are powerful weapons used to disarm any nascent social revolution. This is what happened in the 60s. There was a student revolt, a change of regime, and that’s when the intelligence agencies and the powers-that-be started conspiring to make young people docile. Drugs and rock and roll are perfect for that. So I entered this world bearing this new technology, but nobody cared about technology. This criminal subculture inundated every aspect of our lives. Even today, we have the drug culture that the US had in the 60s. That’s how they disarmed the Soviet Union. With rock and roll, MTV, blue jeans, Coca Cola. And I had to play with the decks stacked against me, and I had no way to survive that.”

Before I’m able to even begin unpacking any part of this outlandish information dump, an assistant comes up to Zuccarelli to let him know it’s time to go on stage. Zuccarelli runs off, takes the stage and performs his song-and-dance for the audience. This is after the album is already done playing, so the crowd is a bit restless and ready to leave. They’re somewhat weary and less receptive to the jokes, but Zuccarelli powers through, and announces that he’s selling demo CDs of authentic holophonic recordings for only $100 pesos at the door.

I thank Hugo and Julieta for their time. I feel like I’m reeling as I exit Auditorio Kraft and walk onto Florida street. My conversation with Zuccarelli was enlightening, entertaining, and somewhat bewildering at points. This is a man who cares passionately about what he’s showing the world, and who genuinely believes that there is a better way of doing things. Whatever may have caused his path to veer from the track of international success — and regardless of whether there’s any weight to the more conspiratorial fringes of his thinking — he’s soldiering on and sharing what he considers to be the gift of his speakers. There are more cynical readings that could made here. I am not interested in making them, nor do I think there is any value therein.

As a music-listening experience, Auditorio Kraft’s Parlantes Holofonicos show is a revelation, and something I can confidently and heartily recommend. It is a wonderful way to experience an album, whether it be an old favorite or a brand-new release. And as I make my way down Florida street, I’m struck by the notion that dwelling on the particulars of the how and why is irrelevant to the end result. I may not be sure of much, but I am certain that I’ll be coming back to Auditorio Kraft for another dip in that lake.

Hugo Zuccarelli is showcasing his holophonic speakers at Auditorio Kraft. Find tickets here. Check out their Facebook and Instagram pages