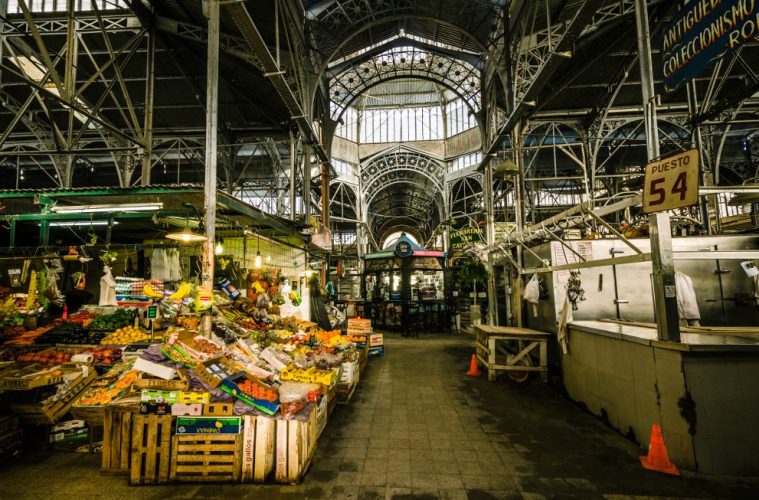 It was sometime during the late summer of 2008 that I first went to the San Telmo Market. I lounged for what felt like an entire afternoon over a burnt café con leche and sticky medialunas. As I got up to leave, Francis Ford Coppola sat at the table next to mine. He was accompanied by a group of fawning Argentine filmmakers; presumably they were there to discuss his soon to be made Tetro, a rather unwatchable ode to the life of a clueless North American expat living in La Boca.

He nodded. I blushed.

That little café is gone now. I think it is a curry shop. La Coruña is gone too; it was a café notable that sat on the corner of Carlos Calvo and Bolívar for seven decades before it became Saigon. There were two family bakeries that are now occupied by, I believe, a wine bar that sells glasses of red and grossly over-priced cheese plates and a little food shop that sells raclette. Shiny LCD screens inform you that the wine comes from the Andes Mountains just in case you weren’t already aware.

Today, the market feels more akin to a run in with Michael Bay slobbering over a shawarma and talking about blowing shit up.

A handful of antique shops of varying interest now sell mediocre empanadas and, for a brief time, small buckets of French fries and chicken fingers at a place called Aloha. There are also two dulce de leche shops, an eyesore of a hamburgueseria, a crepe place and two tapas bars.

Today, much of the neighborhood of San Telmo is as unrecognizable as the market was ten years ago. Heading to the neighborhood then was like walking across the border into Tijuana; charming in its immediate foreignness but forgotten, desolate, famed for danger. You were told not to go by anyone that wasn’t from there. You did, anyway, under the cloak of darkness to pre-game at the then brand new Puerta Roja before heading off to dance at Museum, or if you were a bit more basic, el Rey Castro. And then you swiftly left but not before eating a choripan.

But the neighborhood got a shot of botox. Now it is a destination and its growth has been both similar and opposite to micro-food scenes that have popped up across the city—Microcentro’s booming lunch scene, a diverse set of small bistros across Colegiales and Chacarita and hyper trendy restaurants that extend from Barrio Norte up to Nuñez.

San Telmo has, for the last five years, slowly developed a booming restaurant and bar culture to a very different beat. Neighborhood staples like Pedro Telmo are sandwiched between the aforementioned Saigon and new vegan restaurant JAAM. Whereas other neighborhoods tend to look outward for inspiration, San Telmo has mostly reflected from within. Restaurants lean towards locally influenced menus and when they don’t, they still fit into the neighborhood aesthetic: rebellious, bohemian, charmingly grungy.

Changes to the market were a long time coming. Swap meet style ‘antique’ stands have long served any commercial use and the food stands that were there were mostly low-quality. The market itself also plays a key role in the neighborhood’s survival with the Sunday fair along Defensa attracting nearly ten thousand visitors, both foreign and local, each week. No one is buying Renaissance knock-offs and crazy life-like porcelain dolls. Everyone eats. And so a food focused market isn’t a bad direction to take but it shouldn’t be a free-for-all that puts at risk the neighborhood’s central personality.

The transformation has been haphazard at best. The original structures of various stands have, in many cases, been torn down and rebuilt. God awful shops (re: red striped hamburger stand) spit on the original aesthetic and architectural logic behind the structures. Stands used to be enclosed by bars with chicken wire that slid up and down similar to a persiana. Many now have removable barred gates that litter the already cramped passageways. A trash policy is non-existent, meaning smelly garbage bags from a dozen new food stands that leak mysterious liquids are tossed into various corners as the day goes on.

Beyond the administrative issues the market needs to face, more problematic is the curation of new stands, or lack thereof. The San Telmo Market isn’t like other markets in the city—the Mercado de Belgrano predates the Mercado de San Telmo but isn’t nearly as culturally significant. It makes sense that places like Green Bamboo and Logia move in to a neighborhood that absorbs trends like a sponge.

The Mercado de San Telmo needs to set itself to a different standard and welcome, I would argue almost exclusively, projects that reflect neighborhood culture and local food tradition. The market should be a demonstration of a cuisine in flux and highlight the best of traditional Argentine and Porteño kitchens while encouraging young cooks to shake up old protocol with fresh takes of old recipes.

Take Beba, which sells comida de abuela like buñuelos, milanesas and croquetas with small twists. Or Nilson, a miniscule wine bar on the markets exterior that sells boutique wines by the glass alongside excellently chosen cheeses and deli meats. Verde Oliva offers an updated version of the old fiambreria with a solid selection of cheeses, escabeches and cold cuts. Let places like Merci slide, the proudly French bakery is the one stand that blends in the most in attitude and ambiance. And please, don’t ever let Lo de Freddy, which has the neighborhood’s best choripan go.

But just f*ckin imagine, a Bandini-style pizza shop, an Anafe take on small plates, a Galgos-ish vermouth bar, regional empanada spots ala La Cocina, El Guachito or even Santa Evita. Let’s put in a parrilla with a wider selection. A casual take on the holy bodegón. Add a handmade pasta shop–tourists would faint!

Because what we don’t need is for Coffee Town to take over an entire wing. We don’t need Australian fish and chips or French crepes. We don’t need hamburgers and chicken fingers. They can happily exist somewhere else, like over in Belgrano. Bye.