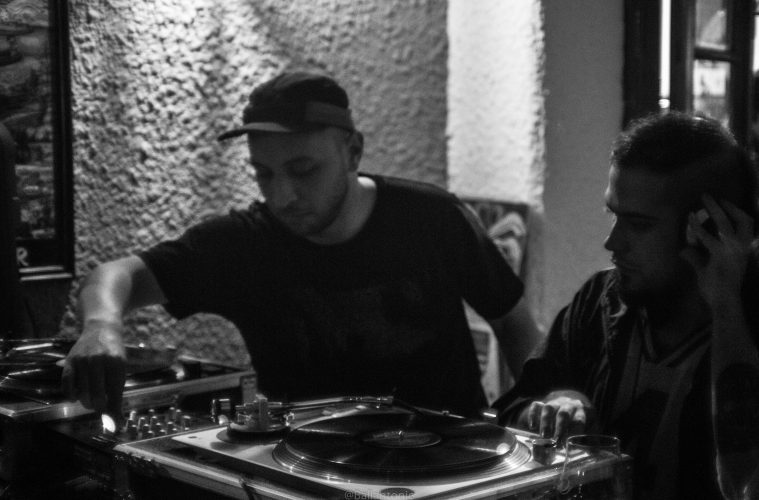 Interview | A Brief Chat With Dano

Eureka is the used record store in San Telmo where the neighborhood’s DJ collective hangs out, plus an assortment of other characters: the guy that only collects box sets, the random tango DJs from other parts of the world, the beatmakers ready for a long session of crate-digging. Every Wednesday at 20 hrs, the collective is performing at Beerlife bar.

Wednesday was an uncommon day for both the record store and the bar, since they were brimming with hip-hop kids, baseball caps, and face tattoos, with rapt eyes on the speakers and ears waiting anxiously. The reason: a DJ set by Dano, the Argentine rapper based in Spain, who was there to sign several copies of his latest CD “Ismo”, and spin some vinyls for those who couldn’t catch him at Lollapallooza. Just a few minutes before his show, we conducted a brief interview in the back room of the record store, where, according to the legend, the jewels are hidden.

How did you start hanging out at Eureka?

“My cousin brought me here, before he started working here. To me, it was my cousin’s friend’s store. I was so lucky, my cousin starts working here and then the guys start playing records, and I think from there we became like brothers, sort of. Sharing music is the best. It goes beyond your age, generation, or language. To all of us music lovers, this place is like a sanctuary.”

How do you choose the records?

I choose the records in an hour. Whatever inspires me, it can be anything. Without listening to it first, I let myself be guided by what I see – the record covers, the names, the years, whatever inspires me. I think that’s fun. Here is where I find the beats to produce. There’s always some loop that shows up, or Nacho goes “hey, check out this loop”.  Crate-digging is searching for inspiration, not searching for what you already have, it’s searching for the weird stuff. It’s not finding what you already have.

What are the benefits of being your own beatmaker?

I think it’s a benefit if you like doing it. Many people do it because they can’t find the right beatmaker. Every MC has a sound in their head, something they wanna produce. If you’re your own producer, you’re taking that sound in your head as far as it can go.

After an opening by DJ CabezadeLP that built in intensity with funk and soul, Dano played a live DJ set and the audience surrendered at his feet. The back-to-back set with his cousin Leo was followed by the turntablism and hip-hop of King Shinobi, who kept people’s eyes on the spinning records while he scratched, and Brazilian DJ Abud, who made super precise transitions with records he had just picked. When I left, the thing was still going.