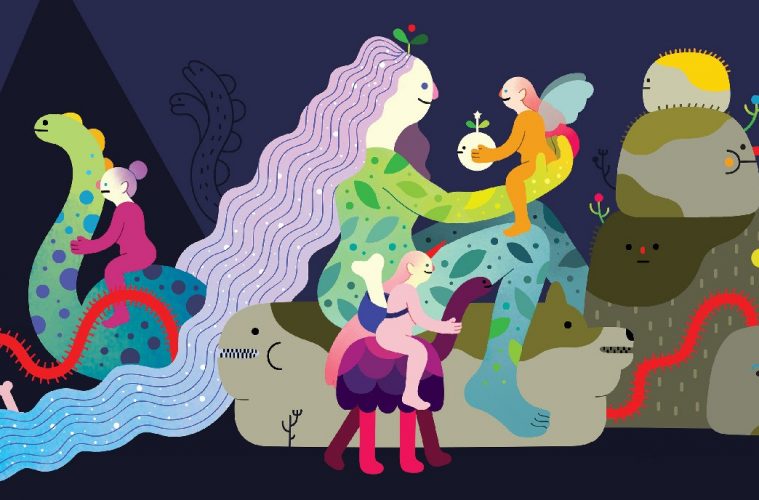 Hello! My name is Lucas De Paoli, and I had the pleasure of being invited by the good folks at La La Lista to write about my favorite medium: comics. The plan? To provide monthly reviews of the most interesting local news in the artform and inform you of comic-related events in Buenos Aires. Our goal? To turn as many people as possible into the joyous cult of panels-and-thought-balloons, and encourage them to dive into the pages of the immense and varied contemporary comics scene. Luckily, there is no better moment to start spreading enthusiasm for independent comics than right now.

If you’re one of those people who’ve had negative experiences with the medium, associating it with a predominantly male world where the stories are saturated with hulking powerful dudes, gratuitous violence, and paper-thin characterization of females as mere objects of desire, then we have good news for you: there’s not only a large amount of female representation in the current crop of authors, but their work is stellar. Year after year, new voices are emerging in the medium, updating and refreshing it. And not only are the majority of new authors women, but their styles are also pretty diverse: among this group of authors you have work that combines illustration with a love for animation, a training in graphic design, or even drawing narrative inspiration from video games, resulting in new types of stories that transcend the tired clichés of superhero comics.

This process of renewing the bloodstream — not just in terms of representation, but also in that willingness to doff the shackles of the “golden age” of an industry upheld by the tried-and-true genre classics —  disrupts the canons of the medium with a fierce sense of independence. This independence may be interpreted as a political act or as a simple exploration of an individual author’s voice through their own visual language. This approach is well represented in the publication of Pibas, an anthology of contemporary female comic artists from Argentina, created by the editorial collective In Bocca Al Lupo.

This project is made up of three comics authors (Daniela Arias, Romina Fretes and Valeria Reynoso) who started working together in 2012 producing comics and illustration fanzines. Spurred by a call for submissions for a comic convention in New York last year, they decided to produce an anthology showcasing the work of female Argentine comic makers in English. They wanted to capture the current scene and put a spotlight on work that rarely reaches an international audience. The end result was edited and published by In Bocca Al Lupo, featuring work by 24 authors.

Luckily, Pibas didn’t end up becoming an urban legend or a hard-to-find collector’s item, as it was recently re-issued by Hotel de las Ideas last month for the local market. The new version is in Spanish, and features a beautiful foreword by Maia Debowicz (who is also one of the authors included in the collection). In it, she very beautifully defines the group of authors (and, by extension, the current crop of comic book artists): “a new generation of super-powered girls who, far from telling soothing and well-mannered stories, are able to fit hidden worlds into tiny panels, uncomfortable for the conservative reader, screaming out to be made visible.”

The book collects small stories by each artist, working as a sort of calling card for the world of graphic storytelling and the tone they each like to explore. Throughout the pages of Pibas we can find stories as idiosyncratic as they are utterly distinct from each other; adventures featuring mythological characters having conversations about lesbian representation, colorful and lysergic reflections on mortality, raw autobiographical stories mixed with the most outrageous fictional elements. What holds the whole collection together is the expression of such diverse styles and characters, many of which are in a constant state of evolution.

In terms of anthologies as physical collections and a representation of an entire scene, there are two disclaimers we should make: Firstly, it is impossible to adequately capture an artistic movement or scene, even more so when talking about a current crop of artists. By the very nature of it, there will always be someone left out of this snapshot of a bustling scene, and so a collection like this one should not be interpreted as a definitive representation of the most relevant authors who are currently working. Secondly, because of the diverse slate of tones and approaches represented, it’s hard for a reader to enjoy the entire thing from beginning to end. There will always be pieces that resonate strongly upon first reading as well as others that simply do not mesh well with our individual subjective tastes. Books like this one must be approached in the same way that one would approach an albums that requires multiple listens to fully determine where you stand on it.

Having established this, Pibas works beautifully as a snapshot of the fiercely independent feminist comic movement as well as a record of the current work of these 24 selected authors. Some are finding their voice in comics while others are fine-tuning their style and growing in ambition. The result is a captivating gallery of graphical narratives, ideal for any person who wants to dip their toe into the current world of Argentine comic art, and anyone who is seeking stories that represent and dissect the topic of the “femenine” in art, as well as defying their perceptions of what comics can be. It’s hard to read this book and not feel hungry for more content by these authors, and that’s the best testament to Pibas’s effectiveness as a collection.

Pibas at the Recoleta Cultural Center

Like I said, this column won’t just be a list of recommendations for you to enjoy at home (or, you know, wherever you read comics). The world of comics isn’t just about home consumption, but in fact it’s a bustling scene including activities, exhibits, fairs, and meetups where artists can show their work to a broader audience. So let’s talk about some activities you can attend this month if you want to get a closer look at the local comic scene.

The release of the Argentine edition of Pibas will be accompanied by an exhibit titled “No Va Mas” at the Recoleta Cultural Center, as part of the institution’s feminist exhibit program. The In Bocca al Lupo collective was invited to curate a collection of works which includes two pages from each story in the book, as well as 10 other contemporary authors who were not part of the collection. This initiative seeks to further visibilize the growing wave of self-published comic authors, and it will run until April 30th.

Additionally, each of the following Saturdays in April will see the Recoleta Cultural Center hosting fairs by several comics / graphic art publications organized by various groups.

The visibilization and proliferation of female authors and their material is a testament to the strides that the comic scene has made in Argentina, and these exhibits serve as the perfect opportunity to get to know the current crop of feminist comics authors and their bold, imaginative, defiant work. Here’s hoping we’ve piqued your interest!