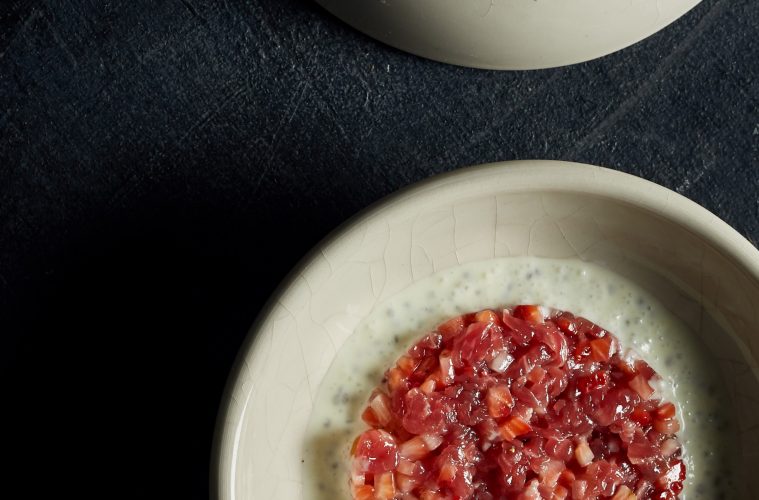 My first meal at LUPA, at that point a fresh faced puerta cerrada housed on a small terraza on the edges of Nuñez, was clouded in mystery. I was given a phone number to whatsapp and received a menu in typewriter font back. The dishes were described as headlines, Shrimp · Asparagus · Grapefruit, like an indie line-up in a festival flyer.

It was the pet project of Victoria Rabinovich and Paul Feldstein, two mid-twenties chefs turning out a weekly five-course prix fixe for roughly fifteen people a night on two camp-style burners and a small parrilla.

She got her foot in the door at Sucre; he is amongst the original team of baker’s at Salvaje. Their own menu played with elements of both. It was a marriage of classic snotty Bajo Belgrano bistros and the fringe rock style of the then brand-new minimalist small plate style that was taking over Palermo. The duo would later design the menu at Lardo & Rosemary, giving a taste for more flamboyant flavors heavy on the ferments, seasonal produce and less common cuts of meat for a Zona Norte bar.

Late last year, they returned as a brick-and-mortar on the same quiet street that housed its supper club. The new space is a low-lit, Lynch-esque dining room with walls that look like distressed denim, black marble tables and modernist leather-backed chairs. The dishes play with the same theatrics, rejecting the subtlety of flavors I experienced on that first visit.

There is a majestic beef tartar with slivers of strawberry hidden amongst the crude, red meat that adds a firework explosion of tart. Tortellini stuffed with smoky eggplant in a buttery white sauce disappear like clouds. An anthill of roasted white and yellow carrots is covered in fresh greens and hides a spoonful of silky mascarpone. The mascarpone pulls out the sweetness of the carrots. There is also fork tender pork served with generous sleeves of red pepper and bamboo. Gooey blood sausage hidden underneath a kaleidoscope of potato rounds served al dente is probably amongst the simplest ideas, a play on two classic local ingredients. The nostalgia tinged flavors were amongst my favorite from the menu. For dessert, slices of yellow plums over a creamy panacotta.

I’ll keep coming back to see how Rabinovich and Feldenstein develop few ingredients into complex works of art. Not every dish is a hit; we were underwhelmed by a deconstructed tamale stuffed with portobello and mole. But when their dishes do hit, they land out of the park. The restaurant also explores a void in the casual dining scene. Alongside colleagues like Anafe and Lardo, they have undertaken the challenge of elevating the dishes served at bars geared for a decidedly younger clientele.

Hours: Tuesday through Saturday from 8pm to midnight