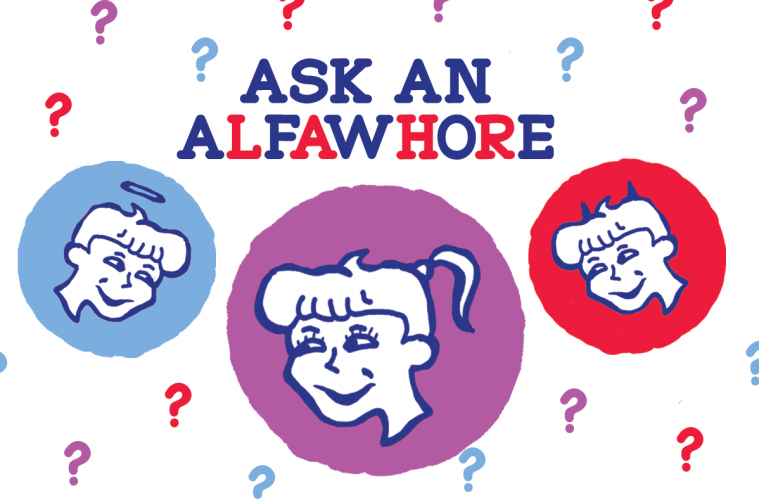 Ask an Alfawhore | Say No to Assholes

The fact is dating, sex, love, basic human connection is hard. But we’ve got just the little snack to help. Ask An Alfawhore, the sex and love advice column from the tell-it-to-ya-straight, sex-positive, uber feminist older sister you always wanted is back. This week: say no to assholes.

I’m only ever attracted to assholes and it’s becoming a problem. I would like to meet someone who makes my life better as opposed to driving me crazy, but I can’t seem to force the spark with a nice guy. I’m starting to wonder if I’m broken. Will I have to trade the excitement of sleeping with bad boys for the stability of a nice guy if I want to have an emotionally mature relationship? This worries me because I really enjoy the intensity of guys who aren’t good for me. Is it possible to have the best of both worlds or am I doomed to boring sex with nice guys?

No, you’re not doomed.

First, let’s unpack the words “asshole” and “nice guy,” terms which aren’t necessarily mutually exclusive. Some of the biggest assholes I’ve ever met are self-proclaimed nice guys, and there are plenty of personality traits (like having self respect and the ability to set healthy boundaries) that might be misconstrued as asshole behavior.

Having got that out of the way, I get it: everyone likes a little anticipation, the thrill of the chase. I think most people would agree it’s fun to be excited about something (or someone). But, for argument’s sake, let’s assume you’re a masochist (or a love junkie), and you’re using these relationships to punish yourself (or distract yourself) because you don’t feel worthy of actual love (or the existential dread of this life is too much to bear). In that case, you’re going to have to take a long hard look at yourself, dig deep and find the courage to love yourself. That hole in your soul created by self-neglect is just way too big to be filled with sex (believe me, I’ve tried). People who don’t give a shit about you can seem like a lot of fun if you’re self-destructive, but indulging the self-destructive side of yourself is basically like being addicted to punching yourself in the face.

I tend to believe that we project a shit ton of our baggage onto others, and we generally gravitate to people and situations out of habit. So, if you’ve been getting off on the thrill of uncertainty for a few years or you’ve internalized feelings of inadequacy, then it makes sense that when you’re in the presence of the familiar asshole, your neurons fire like the 4th of July and your brain releases those delicious stress hormones that feel so familiar you think they feel good (mmmmmmm, feels like you’re free falling through the fucking universe). Human beings repeat patterns no matter how destructive they are.

My advice is to try looking at it in another way. Perhaps a new perspective will help you change your destructive patterns. Maybe you’re not attracted to assholes. Maybe you’re just attracted to the illusion of mystery you perceive when you’re with one. Serial assholes are often just extremely boring people who have found a loophole in attraction. They’ve figured out how to temporarily hold someone’s attention despite having no redeemable qualities or much to offer in general. Basically, they’ve figured out that treating you like shit makes you think they are interesting. Isn’t that kind of sad?

It sounds like you’re getting tired of assholes, and that is great news. Welcome. Acknowledging you have a problem is always the first step. Now, I urge you to be aware and practical in your approach to recovery (careful, assholes have a tendency to slither into your life when you’re least expecting it). Make a list of all the things you like about these shitheads and really think about them. Are any of these attributes actually making your life better? Then the next time you find yourself attracted to the loudest asshole at a party, look at them. I mean really look at them and ask yourself: Is this person interesting? Are they admirable in any way? Do they have anything of value to offer me? Or am I only attracted to them because they make me feel like shit?

It’s a process, but freeing yourself from liking assholes opens up a whole new world of sexy, interesting, self-aware potential partners, full of mystery and passion, who won’t cost you your self-respect.

Have your own question for A.W.? Shoot us a line at team@lalalista.com with the subject line AlfaWhore, and she might just pick yours for the next column.