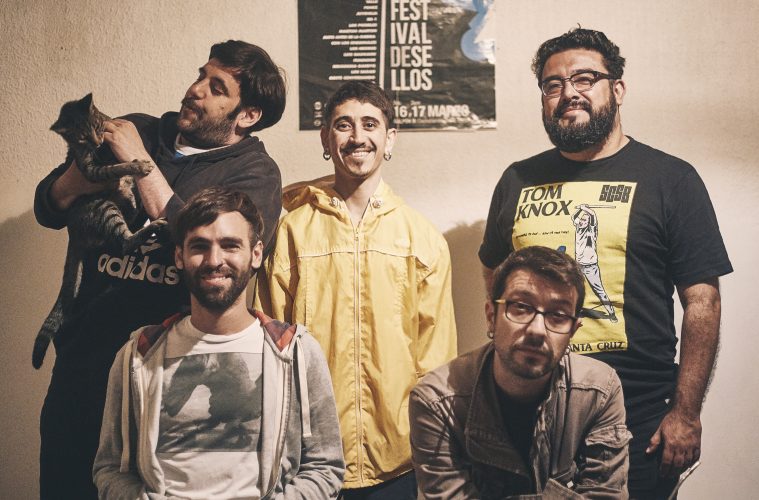 It’s not easy being an independent record label these days. The music industry has been in a constant state of turmoil for the better part of the last two decades, leaving artists, promoters, and organizers alike in a state of high alert/desperation as they’ve watched most opportunities to make a living from their art be stripped away from them. Throw in an economic crisis and it begins to dawn on one the true impossibility of being a record label in Buenos Aires.

But yet they exist, and have persisted in existing, long since my arrival here in Buenos Aires almost 8 years ago. And they do more than exist – they run the damn show a good deal of the time, sometimes joining together to throw beautiful events that bring a diverse array of artists together to celebrate fighting the good fight and making art without a patron. One such event is the annual Festival de Sellos, a 2-day affair that celebrates 15 local record labels and their rosters with live music, merch sales, seminars, art exhibitions and more.

We spoke with the originators of the idea, the record label Fuego Amigo, about their experiences, inspirations, and goals for the event. Interview below.

First, I want to start with a few questions about your label: Tell me a bit about your record label – when did it all start? How did it start?

Fernando Graneros started Fuego Amigo Discos at the end of 2010 as a netlabel where you could download singles by Jo Goyeneche, Los Ángeles, Luciana Tagliapietra y Verdeoscuro. At the beginning of 2011, with the addition of Mariano De Los Ríos, the label started developing more and editing in physical format

Even though the label was born in 2010, Fernando y Mariano have been working together as friends and colleagues since 2007. Back then, they organized parties, movie nights, and live shows.

How would you describe your record label’s mission?

We’ve had different challenges across time, and with every year of life of our beloved label. Today, our mission is to take Fuego Amigo Discos to an important place in the history of our culture. We don’t wanna be an old trophy in display, we wanna be protagonists of the present putting all our love and creativity to serve art, to serve bands that make our hearts burn with their sounds, to serve this transcendental and powerful energy, a sacred energy that we find in music and wanna share it with the cosmos. To achieve this, we’re going through of process of constant growth and transformation, we’re a team of six human beings that are constantly planting seeds for the future. One of these seeds that we planted a couple of months ago is about to bloom in all its splendor. Its beauty moves us and makes us cry – this seed is called Festival de Sellos.

What’s the process like for finding/signing bands? Is there anything in particular you’re on the lookout for?

There’s no mystery to the process of adding bands to the label. We constantly frequent the different cultural corners of the city in search of new musical universes. This allows us to have a wide array of artists that blow our minds. When we think we can enhance the potential of some of these artists, we offer them to work together to reach a higher ground, and we reach out to communicate that, to get to know each other better, and to outline the path. We’re also lucky, because some of these artists have reached out to us to be part of the label, and when that happens, our souls are filled with joy, we feel the galaxy is hugging us.

The music scene has changed so much and so rapidly over the last few years, not to mention the last 10-20. What do you think the role of the record label is for bands today? How has that changed from the past?

The world goes so fast that sometimes it’s hard to process it. We are in an era where we’re constantly bombarded by all kinds of stimuli and information. And, at the same time, this country is going through a crisis. All of this has an impact on the forms of production and promotion in the music scene. The role we intend to have with our bands today is to be an artistic collective that can adapt to the particularities of each band, to whatever the band needs to enrichen its art. In the past, an independent record label could only rely on facilitating the recording and the physical edition of an album. Today, that’s just not enough – today, more than ever, you have to be like water on the riverbed, that doesn’t stop before any obstacle and adapts its form to move on.

What advice would you give yourself  if you could go back to when you started?

We’d tell ourselves to not stay on the fringes, but to not despair over becoming mainstream either. To beware of the managers. To cultivate time and patience. To try to absorb all the music you can, in all its forms. To be a little more open without losing your essence and artistic values.

What record labels from abroad inspire you?

In the beginning, our poetic, musical, and sensitive aspirations were influenced by labels like Sarah Records, Elephant Six, Matador Records, Flying Nun, and Austrohúngaro. With time, we learnt to shape the label in our own way.

How did this idea first come about?

We’re living times where you have to favor the collective over the personal stuff if you want to live in a better world. In a way, we think that the exaltation of individuality, that rules a great part of our society, has led us to live in a world that’s horrible, unequal, and a little desolate. That’s why we think that part of the solution to this context is UNITY. That idea led us to organize a Festival de Sellos, with more than 15 independent labels working side by side for a great cultural project that includes us all.

How do you go about picking which labels to invite?

Even though we were the first ones to organize a group of labels to put together this festival, we refuse to label them as ‘invited labels’, because each one of them (and those who joined afterwards) has played a key role in creating and making this festival happen. There’s no protagonism. Festival de Sellos is a horizontal construction. We were all invited by a cosmic energy to shape this event. And the criteria this magic force used to get us together, was to select independent labels that work side by side for a musical project that gets people out of the cultural lethargy that the “official” culture proposes.

How do you go about putting together the band lineup?

To put together the lineup, each label chose the artist/band from its roster that thought fit for the event. Some chose musicians with a prestigious trajectory in the scene, others chose their newest adds, others chose disruptive musical projects that blow people’s minds. In short, the lineup was put together democratically and without pretending any artist is above the rest.

How did you go about choosing the venue?

It was more like, the place chose us. When the idea of making this festival came into our minds, my friend Demián Kaplan Krep (who I hadn’t seen in a long time) messaged me out of the blue telling me that he wanted to get together to make a festival with up-and-coming artists and he thought the bands in our label were just right for what he had in mind. You see? I’m not crazy! I insist: we were all invited by this cosmic energy to make this event. You better believe it.

What’s the mission statement of this event?

To give you an idea of what we hope to achieve with the event, I think it’s appropriate to quote Mambo’s (our spiritual guide and guru, from Sólo Le Pido A Dior, one of the organizing labels) recent declarations to the press: “We should use this meeting to share strategies on how to move on and kick this reality in the face. Also, to reveal the truth about the market and the successful cases that they’re trying to sell to us all the time.”

Put another way, Festival de Sellos wants to generate a new cultural experience that strengthens and enhances the role of independent labels in our country.

The Festival de Sellos happens this Saturday and Sunday at Galpon B, Cochabamba 2536, CABA.
Tickets ($300 for both days, $200 for one) are on sale at the following locations:
*Tienda Inerme (Av. Santa Fe 2450, local 100 Galería Americana)
*Siempre Acampa (Av. Santa Fe 1126, Galeria Rustique)
*Xennon Quilmes (Yrigoyen 574)
*Online vía Evenbrite (incluye costo de servicio
Tickets can also be purchased at the door for $250, but capacity is limited!