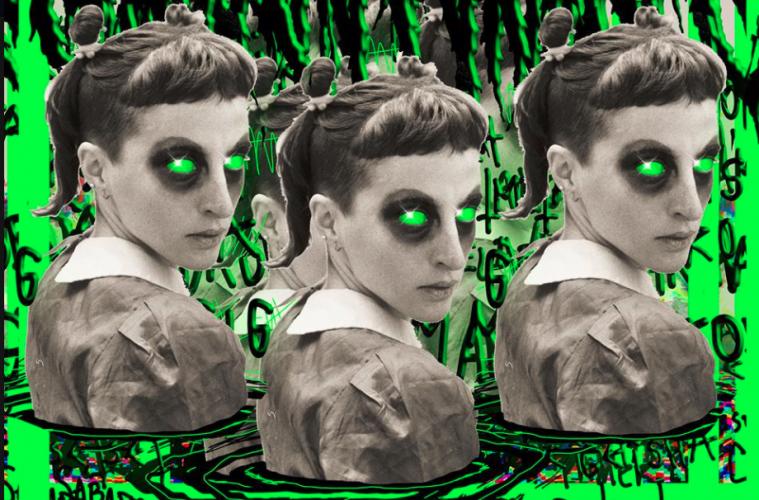 It’s the final week of February. It’s the week that I finally enlist the help of Jorge‘s cat, Dee Dee (Ph.D in felinemusicography), to write the introduction for La Lista:

Wow. Truly enlightening. Thanks, Dee Dee. While her contribution is pretty open to interpretation, semantically speaking, the conclusion is irrefutable: you need more LIVE MUSIC in your life! Here’s our lineup for this week:

Re Signados present their debut EP, La Bola Ciega, produced by BPM Discos. For such an important ceremony, they have enlisted the participation of Telefonema, Penny Peligro, DJ Ale Ban, and DJ Waly Trupiano. Re Signados is a duo from Buenos Aires formed by Caro Ban (vocals and lyrics) and Gonzalo García Blaya (electric guitar, synth, and programming). The band’s sound mixes post-punk, noise, and dark-wave influences. In their original songs, dissonant and gothic guitar sounds dialogue with a pop-noise aesthetic, while the synth and drum-machine keep time with lyrics that explore the tension of modern life from a metaphysical perspective.

So, this event was supposed to happen last week, but was cancelled do to an electricity outage. It was a bummer (but I got to spend the evening hanging with Playa Sintética, so, it wasn’t all bad!), but fortunately the event has been rescheduled for this Thursday. New wave punk rockers The Puñeters and indie-pop rockers Amplilabial, two bands from the label BPM Discos, team up with surf-rockers Playa Sintética, who just returned home from their first international tour, and Quilmes-based rockers Los Borrascosos, to bring you a night of dance-able, mosh-able, rock and roll.

Fuego Amigo Discos presents Fervors and Verde y los Caballos a Marte, together for the very first time, live at Roseti. After realeasing ORTÚZAR, their debut EP, Fervors have found themselves (has found themself?? itself?? …navigating pronoun usage when talking about bands is a constant struggle we face here at La La Lista) recording a new album, and creating new spaces within which to wrap us in their crystal charm. Verde y los Caballos a Marte are preparing for their metamorphosis and will be offering us something unexpected on Friday…intriguing, right?

The fresh, eclectic, and label-defying artist Leandro Viernes, who has a long and colorful history within the Buenos Aires music scene, will be playing Friday night along with Gente Conversando, a similarly label-defying band who always give a one-of-a-kind live performance. The event, hosted by Eva Esdrújula and also featuring a DJ set by Lolo Fuentes, is to celebrate the birthday of one Julio Fernandez, who, if my facebook stalking skills haven’t failed me, is the PR guy for Podestá, the venue where the event will be held. Come out on Friday to experience some great live music and to wish good ol’ Julio a happy birthday!

This Saturday’s electronic music lineup at PRIMER PISO BAR might just explode your whole head right off, so if you’re into that kind of thing, you don’t want to miss this CRAZY PARTY. The event will feature live original electronic sets in styles ranging from trash and grindcore to kawaii, reggaeton, and EDM, performed by some of Buenos Aires’ finest out-of-their-fucking-minds electronic musicians, including Dirty Caka, Gabbang, Manhanto, La Metamorfosis Del Vampiro, Morphoaega a.k.a Darkgeisha, and a DJ set by Fede Marchand. The party starts at 1AM Saturday night and won’t stop till Sunday morning’s sun-up.

It’s settled – this Saturday, rain or shine, freezing cold or blazing hot, we are throwing ourselves into the pool! Participating in this second edition of Nos tiramos a la pileta (literally: we’re throwing ourselves into the pool) will be a variety of artists who have volunteered to get up on the stage and show us what they can do. The event will be an opportunity to share your art with an understanding audience, meet other artists, and enjoy all that we have to offer each other. Musicians who have signed up to share at the open event include Nikkie Warr and Nico Cavi, but in addition to music there will also be poetry readings, theatre, performance art, and a burlesque show!

Clásico Fernandez opens its doors at 6PM this Saturday, and will be awaiting you with pitchers of Campari and Argentinian CYNAR. And if you’re coming for dinner, the classic and flavorful picadas menu or the house hamburger can give some extra deliciousness to help you enjoy the show. The smooth electro-pop group MAR will be performing live. The Buenos Aires based band continues presenting their single “A marte.”

Los Besos is a band that explores the concept of song in all of its genres, and considers lyrics to be the central nucleus from which a melody is formed. Los Besos formed as a trio in Buenos Aires in 2011, under the name “Paula y Los Besos,” and performed original songs written by frontwoman Paula Trama. Today, the band performs with six members, and they are currently presenting their fourth album, Copia Viva. This Sunday they will be giving a very special and FREE show on the roof of Centro Cultural Recoleta as part of the Clave 13/17 festival which focuses on giving visibility and opportunity to artists between the ages of 13 and 17 in multiple disciplines.

This Sunday, there will be a Piscean Carnival of Love (I don’t know about you, but for me personally, the name alone makes this event sound super appealing) in honor of Clara Noa and Alejandra M. Zani at LuzArtificial (secret location – you can get the address by 1.) not being a cop, and 2.) sending a message to one of the organizers through the Facebook event page). There will be a bar with delicious food and refreshing drinks at prices for the People. Clara Noa will be exhibiting her photography, Montarosa will be playing their songs (I saw this band last week and they are awesome!), and there will be poetry readings by the likes of Maia Duek, Nerina Carunchio, Pierre Froidevaux and Juan Francisco Moretti. After the programmed performances, there will be an open mic and a balls-to-the-wall joda.