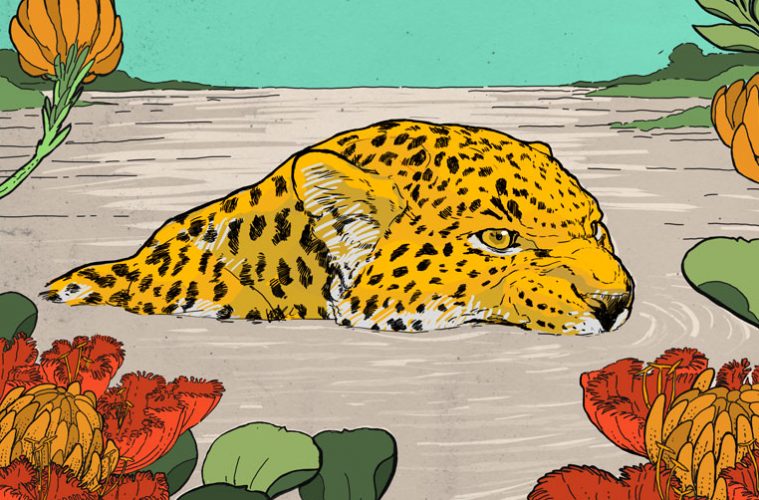 Interview | Behind the Scenes of Santa Fe’s Guaraníder Festival

Somewhere in a field north of the city in the middle of Santa Fe there are bands pleading with the sound technician to crank up the bass in the monitors. Instruments are being tuned, setlists double-checked and finalized. Vendors are cursing the heat as they set up their coolers of water and beer. And at this moment fans from all over Argentina are sitting on the edge of their colectivo seats on their way to a weekend of communal, nutrient-filled music appreciation. Today marks the beginning of the Guaraníder Festival, the third annual music festival put on by Radio Voces De La Costa and Hugo & Los Gemelos.

Music festivals, be it a mainstream Lollapalooza or your local record label festival, have a tendency to connect — fans with the artists they love, artists with other artists, communities of strangers all swaying to the same act. This one in particular, with the guiding philosophy of overcoming division and a name that signifies being human in its “purest and truest form,” seems like just the place to get back in touch with the underlying good of the human condition. With a mixture of genres, returning headliners like Los Espíritus, and a venue that is “more like a state of mind,” you know it’s gonna’ be good. If you happen to find yourself the ganas to trek north and leave the city there are still a few tickets up for grabs. We sat down with event coordinators to get the behind the scenes lowdown on how everything came to be.

How did this festival come about?

The idea was born three years ago, when a couple of friends from a community radio in Arroyo Leyes needed to raise funds to fix their antenna, which had fallen due to a storm. That’s how we started thinking about organizing the first edition in 2017, called Me Quiero Dar Un Gustock, a festival without borders. The festival was co-created by Radio Voces De La Costa and Hugo & Los Gemelos.

Have you organized festivals before?

This is the festival’s 3rd edition and, unlike most festivals, it changes its name from year to year. First it was Me Quiero Dar Un Gustock, the second was called Ananá Der Festival, a bizarre pun between English and German (An Another Festival) to address this change as a consequence of movement, but trying to keep its essence. It changes names, it references another festival that’s really the same one. And this third edition was born as Guaranider Festival.

What’s the story behind the name of the festival?

It’s about the wordplay, just like Ananá Der Festival. Originally, the idea was to change to a different fruit every year, so that’s how we got to Guaraná Der Festival (What? Another Festival), and that took us to Guaraní, which means human being in its purest, truest form. We thought that name had a strong link to the Litoral and its native people.

How did you choose this particular venue and location for the festival?

To get out of town, the search for contact with nature, the expansive open fields, all of that led us to this place we like to call El Litoral De La Galaxia that, more than a place, it’s a state of mind or a vibration frequency unified with the psyche of the landscape.

What is the value of a festival where this a mix of acts to choose from as opposed to just seeing one artist or band?

I think the communion generated by the festival is what sets it apart from a show by a band or a solo artist, both onstage and below. The cultural input is much more nourishing, because there’s a search for a common ground among the different artists.

How did you go about curating the artists? Was there any guiding philosophy behind it?

The lineup comes together based on our affinity for the artistic projects, for musicians, for other human beings looking for a path, and those that we added to this space we co-created. That way, you have well-known artists that resonate with the essence of our message, along with up-and-coming bands that nurture the festival’s diversity. This year we managed to keep extending our borders and invite bands from Córdoba, Formosa, San Luis, Santa Fé, of course, in addition to our magical friends Leza and Yatho, from Sao Paulo, who have been coming since the beginning. And, a huge gift for us this year has been bringing in Eli U Pena, heiress of one of the most interesting Rioplatense songwriters like Príncipe Pena.

Gustavo Santaolalla – it’s such an interesting idea to have him play a music festival – where did you get the inspiration to invite him? What can people expect from his live show, considering he’s known primarily as a producer and composer?

The possibility to include a show of that caliber, which will be the festival’s crowning glory, so to speak, is a divine gift. An opportunity of immense proportions, and that challenges us to give it our all for what we believe in. This festival’s goal is to build cultural bridges, to share, to expand ourselves in the path of doing what we love. It’s a huge responsibility. And after a series of synchronicities that took us closer to Santaolalla, we got to play a concert with La Santa Banda in Formosa. Now we live it under a different role, which is putting all our work, time, and love into making this show possible. It will be the final show of a 2-year tour called Desandando El Camino, that took him to different countries in Latin America, and his first concert in Santa Fe. Much more than a show, it’ll be a spiritually moving experience.

A respectable number of female musicians are playing the festival. What is your response to the recent story about José Palazzo and his comment that there aren’t enough women with talent to match the level of Cosquín Rock?

Honestly, at first, the subject of feminine quota in festivals was something that we thought about a lot. We wanted the selection of the bands to be genuine, without any kind of bias gender or otherwise, and we were having a rough time finding resonance with the projects that would allow us to meet this quota. That’s when we realized that our perception was conditioning us. Once we were aware of that, everything came together.

Tell us about your own band, Hugo & Los Gemelos.

Hugo & Los Gemelos is a post-apocalyptic band that started in December of 2012, due to a necessity to find a new way of seeing things and expressing that. The first year there were just two musicians and an actor… today, there’s 13 of us! Having 13 people in a band, the influences are very varied, but I come from a strong blues background, like The Doors, The Rolling Stones, and The Velvet Underground for their spirit; Sumo, Los Piojos, because of their search for an identity in Rioplatense rock; and other influences that range from Gustavo ‘El Príncipe’ Pena to Gilberto Gil, to Ali Farka Touré and Tinariwen. Someone once said that Hugo & Los Gemelos is blues litoraleño with live incarnations. I think it’s a good synthesis.

What are some of the biggest challenges organizing an event of this scope?

To be coherent with our first motivation, the original intention, that which led us to create this festival. And with that purpose, generate the purest reflection on those who receive the message we send out. We wanna take care of the purity of the intention. On that road, we ran into some powerful obstacles that we slowly managed to tackle.

What do you hope to achieve with this event?

Resonance. Communion. Being able to integrate and get over the illusion of division that is hammered into us day by day. Art is a very powerful tool to elevate yourself, both in the divine and human aspect. And this festival is all about that: time is art and not money.