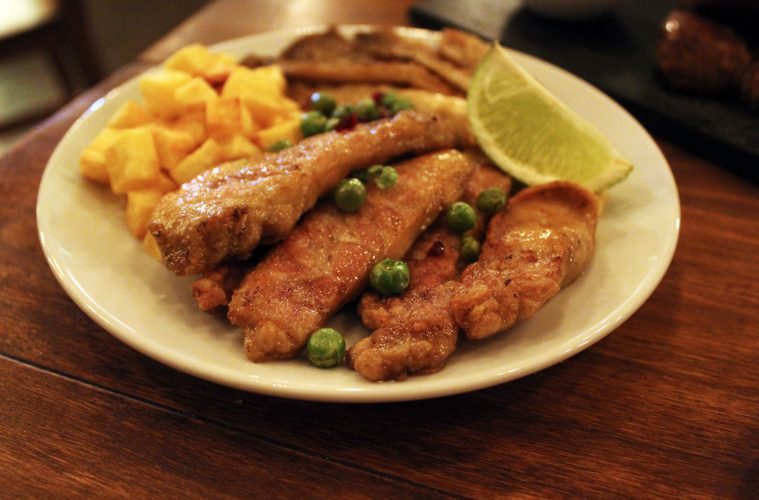 Tataki and tortilla española. Manila rice and Basque fish. Pork belly with rice noodles and cuttlefish stuffed with chorizo. These aren’t exactly items you expect to find on a single menu. At Lekeitio, a Chacarita restaurant whose name I still can’t pronounce, owner Shanti Abiotiz mixes the foods from a childhood spent in the Philippines with his proud Basque family.

His family arrived to Argentina by way of Uruguay. His grandfather founded Bun, the first potato chip company in South America. The women in his family were all skilled home cooks. They wrote Basque cookbooks that the kitchen has pulled from to create the restaurant’s expansive menu. Distant relatives continue to live in Lekeitio, the little beach town outside the capital city of Bilbao.

Upon opening, the kitchen tended to play it safe and aired heavily on the side of Basque cooking with often barely noticeable nods to Filipino and East Asian cuisines. A sticky dark purple beet risotto, salty morcilla that crackled underneath filo dough and braised beef cheek swimming under a buttery nebula of mashed potato were skillfully made dishes that obviously spoke to Abiotiz’ nostalgic hunger pangs for his mother’s cooking.

But late last year, the crew took over the kitchen at Laurak Bat, Montserrat’s 140-year old Basque cultural center. The gloves came off. The newest menu, which was updated just last week, is a love song between East and West.

To start, slender rounds of eggplant are fried and painted Pollock-style with a slightly sweet balsamic reduction. The pucks are cut so thin they are nearly transparent. They also appear on the picada oriental, which includes kinilaw, a coconut flavored raw fish dish and glazed pork belly. It is wildly different from the picada vasca, a carb and preserve heavy selection of bresaola, Iberian chorizo and anchovies.

I’ve eaten a lot of tataki lately: a sublime version at Niño Gordo is served thin and blue with cured egg yolk that spread on like butter. In San Isidro, Asato uses a Argentine-produced wagyu; the silky bites of beef are served with extra crunchy rock salt and akusay. Here, bife de chorizo is served rare with a citrusy-sweet Japanese ponzu sauce and extra crisped baby potatoes. Slim sticks of sweet breads are lightly pan seared and served with crunch potato squares. The sweet breads become a medium of which to scoop up a white chocolate and corn cream. The nutty sauce peaks with a touch of wasabi and earthy fried peas that pop loudly like biting impatiently into a lollipop.

A dish titled Contraband Chipirones were the new menu’s star. Cuttlefish are delicately stuffed with peppery chorizo before being sauteed in rice dyed with its own ink. They tear apart easily and with each chew release notes of bitter ink and the rich sea flavor of the little fish. Bits of chorizo pop on and off the tongue and pair well both with the sticky white rice and its gooey ink tainted neighbor.

For dessert, a dreamy cream pie wetted with a orange syrup. The wine menu is expansive; on the low end there is a soft Syrah-Ancellotta blend by Very Rouge. There is also a Grenache-Syrah-Mourverde from De Mono Rojo and a Catena Zapata Malbec for those with deep pockets.

The table next to us was brought over a heaping milanesa and french fries that I could smell before it rolled out of the kitchen. A few tables down, a couple shared pork marinated in honey and lemongrass. The two worlds didn’t seem too far apart.

Open: Tuesday through Saturday from 8pm to midnight; Sunday noon to 4pm