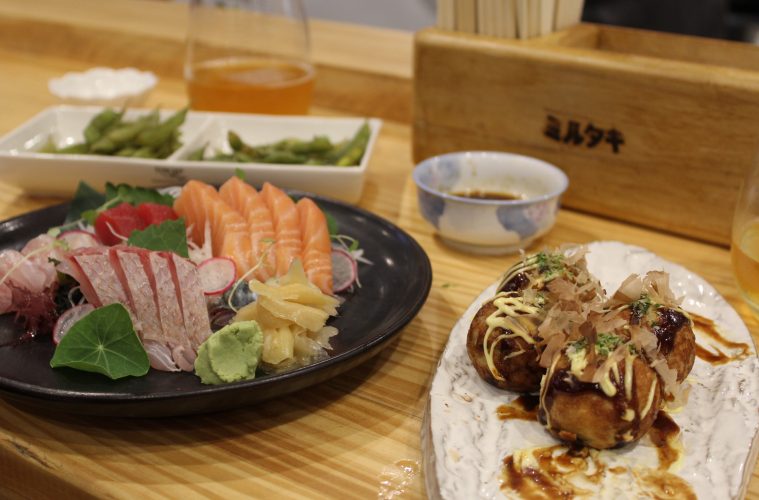 Take One: Although typically we’d like to give a spot a few tries before writing our review, budgets are tight (hi, Macrisis!) and we don’t ask for freebies. ‘Take One’ will highlight the dishes that left our resident food writer, Kevin Vaughn, wanting seconds.

The first truly hot night of summer, I went to Mirutaki, a Japanese restaurant on the edges of Palermo Hollywood that opened last year. It wasn’t, despite the air conditioner on full blast, exactly the best opportunity for a bowl of ramen.

Mirutaki is one of many restaurants that represents a pan-Asian flight from the traditional neighborhoods of Floresta, Bajo Flores, San Cristóbal and Montserrat to the shiny barrios that fall north of Avenida Córdoba. Many, as is the case of this little sushi bar and ramen shop, run by second-generation Asian-Argentines looking to capitalize on a rapidly expanding local palate.

The restaurant is run by brothers Matias and Nico Totake. Matias concentrates on the sushi counter while Nico guards the ramen. They had the same dynamic at the restaurant where I first met them, Nueva Casa Japonesa, a small Japanese counter above a grocery store in San Cristóbal. The new space is shinier with long pale wood bar and white walls interrupted by anime and manga character slurping up large bowls of noodles.

The menu is split into four categories: appetizers, ramen, sushi and kamado, or dishes cooked over a charcoal stove. To start, crispy pan-seared gyoza that in two small bites flood the tongue with ginger and garlic. Edamame, of which I have never seen served in Buenos Aires, are particularly joyful to eat. We sopped up earthy soy sauce before popping the dense green beans into our mouths. The takoyaki quickly followed. Takoyaki are fried fritters stuffed with slices of octopus. They are prepared in a contraption similar to a waffle iron; the iron is open and dotted with small half globes. One cook is in charge of filling the slots with batter, stuffing it with octopus and waiting for the right moment to flip each fritter with a long pick. They burst like little bombs; the texture is a cross between a fluffy, slightly wet pancake and a crisp waffle. Their fragility is covered in a savory tonkatsu sauce and chewy flakes of bonito that sway back and forth with the heat that rises from underneath it.

The sashimi moriawase was an uncharacteristically generous serving of salmon, red tuna, red sea bream (besugo), lenguado (sole) and caballa (mackerel). The quantity was more charitable than the flavors. The fish was noticeably fresh and sliced with incredible skill but I would have portioned differently, adding more meaty mackerel, fatty red tuna and sea bream while eliminating the salmon and sole altogether. A plate of bife de chorizo was brought over. I don’t know what I imagined–but it wasn’t what arrived. Miniscule slices of cured beef had such an overwhelming presence of salt that if I had been given cured bondiola from the fiambreria down the street I wouldn’t have known the difference. A wasabi laced sauce, which pricked the tongue with just the right note of spice, wasn’t enough to save it.

For dessert, a cheesecake stood out for it’s audacity in a menu filled with traditional Japanese fare. I’m glad they took the risk. A matcha flan, although my dining partner continues to talk about it, felt unfinished. My suggestion to add dulce de leche and a Japanese inspired cream was welcomed with a smile from the pastry chef but apparently is a heated topic amongst the mostly Japanese-Argentine staff.

As I scooped up the last of the cheesecake, bowls of ramen continued to fly out at breakneck speed. I’ll check back in come winter.