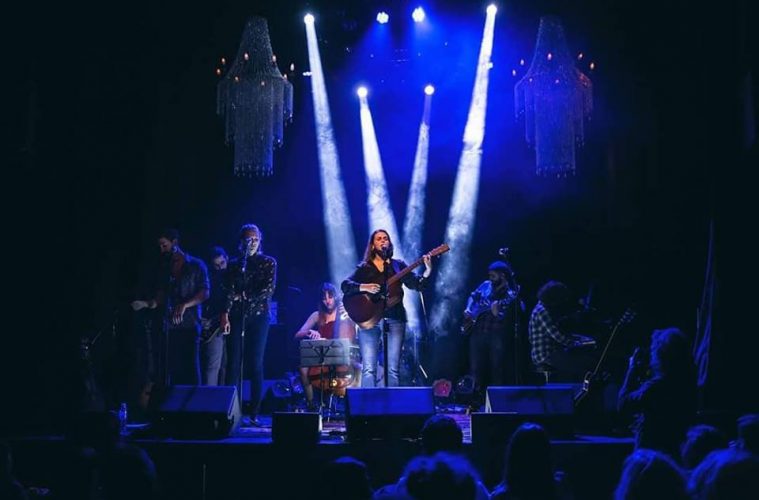 Today, it “feels like” 40°C (that’s 104°F). And I, the most cold-natured person you have ever known, who is always, always, always cold…am hot. Uncomfortably hot. We installed a pelopincho in the patio of my house. As I write this column, I am taking breaks every 15 minutes to cool off in the water, as it’s the only way to keep from feeling like I’m going to pass out. Now, I could tell you that a little bit of LIVE MUSIC will help you beat the heat – but that would be a lie. Unfortunately, all of the artists on our agenda this week are FIRE (this actually probably explains the heat wave) and will only make you hotter.

All Wednesdays, all year, at La Gran Jaime. The venue unfortunately has no swimming pool to boast of, but they do have everything else you could possibly want to enjoy the Summer, including live music! This Wednesday you can hear a duo comprised of multi-instrumentalists Miguel Palma and Laura Saglietto, and a set from solo artist Condor Acústico on the guitar. In addition to music, there will be literary readings by Jessica Escobar, Luciana Ruggeri, and Clarisa Aioki, as well as live drawing by Miel Busatta.

IndieFuertes is a ciclo born of collaboration between Niceto Club and local journalist Yumber Vera Rojas, with the objective of uplifting the local independent music scene through weekly sonic, cultural, and tribal experimentation. This week you can witness Marttein, the experimental electronic noise music project of Martín Olveira, who in 2018 released the 6-track EP Guerra through Portland-based record label Alp. Coghlan, the project of producer Eugenio García Carles, incorporates heavily-autotuned pop motifs on a spectrum ranging from romantic ballads to total experimental debauchery. RITUALFIR3 is the project of Eugenia Jolly, music producer, DJ, and singing teacher who has been singing on Buenos Aires stages for 17 years. This project, in which she sings and dances over a live original DJ set, is characterized by versatility and the destruction of genres.

Free acoustic music in the garden of Auditorio Belgrano, every Thursday, Friday, Saturday, and Sunday, all Summer long. This Friday’s line-up includes soloists Ariel Stavitsky and Iván Salomonoff, and a duo performance by Rocío Sanjurjo Abalos and Dario Barozzi.

Are you looking to get your rock and roll on? La Comunidad del Sótano (or in English, “basement community”) is ringing in February with a musical celebration. Rocking out on the stage Friday will be all-girl indie pop trio Ruidas, who are in town from La Plata; 5-piece post-pop-rock group MegaFauna; and stoner-jazz-rock group Shawarma. In addition to the music, there will be art exhibitions to peruse, including works by artists Brokenpiba / Malena and María Belén Eleicegui.

This Saturday we will have the pleasure of reuniting once more, with renewed energy. Art has no border or limits, and the purpose of Ciclo Diana is to come together from various disciplines, uniting our voices, louder than ever, to create a space for culture to be ignited – we are a burning flame that can not be put out! This Saturday you can hear the sweet and sticky indie tunes of De Incendios, the electro-folk-pop of Biografia Mutante (Juan Manuel López Manfré), the lo-fi gangster kawaii pop of Regy, and the transcendental math rock of TOTS (Transmigration of the Soul).

Facu Tobogán, the singer of Tobogán Andaluz, will present is brand new solo album, Teléfono Blanco. This new album, produced under the record label Discobabydiscos, represents the artist’s revisitation of his folk roots. After this presentation in La Tangente, Facu will begin an international tour through 6 countries (Argentina, Chile, Peru, Mexico, Uruguay, and Brazil) during the first months of 2019. Local psychedelic folk-blues group La Noche que Estuve a Punto de Morir has been invited to open the show.

Espacio Cultural El Universal opens its doors Saturday to offer a free acoustic show to the public. Come on out to hear alternative americana folk singer-songwriter Dolores Cobach and BZOMB, a one-man band comprised of Brian Zditowski on vocals and guitar, Brian Zditowski’s right leg on the bomvalija (a kick drum fashioned out of an old suitcase), and Brian Zditowski’s left leg on the snare.