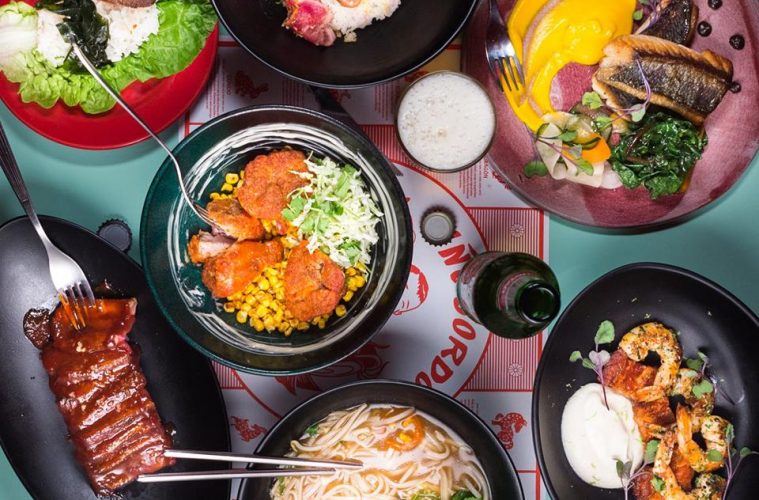 Last year, Niño Gordo was the golden child of the year’s openings. Pedro Peña and Germán Sitz, the dream team behind La Carniceria, Chori and Juan Pedro Caballero opened the city’s most restaurant. Behind an unmarked door lies a love song to East Asian cuisines prepared with the pair’s signature affection for a good grill and fire. The interior, designed by It-Couple Alan Berry Rhys and Eme Carranza, is dressed with shiny Formica tables and cafeteria tiles that luster underneath bordello red lights. It brings to mind filmmaker Wong Kar Wai’s nostalgia for 1960s Hong Kong, as delicate and detailed as the qipaos worn by Maggie Cheung in In the Mood for Love.

But I have a confession: I didn’t really like it. Or, at least, no me . I didn’t feel like I had been possessed by Buddha himself like every other local influencer and food writer.

We ate some good stuff. A savory okonomiyaki stuffed with chinchulines and topped with panceta and katsuobushi—dried, fermented and shaved skipjack tuna that gently waltzes back and forth when introduced to heat—was as stunning as it was wonderfully gluttonous. There were also sublime black duck dumplings that popped with the intensity of a breaking storm.

More memorable was a dried out fish served with ‘spicy’ rice that coated the tongue with the oil it was fried in, a kimchi with a mustard-ish acidity that aired more towards rancid than fermented, an exaggeratedly scant serving of sweetbreads hardly fit for a fat kid and a bife de chorizo that felt more at home at La Carniceria with a glass of smoky Malbec than with a chilly Thai Singha in the Asian cafeteria we were seated in.

It was, worth noting, the first month. There was too much information and all the elements had yet to flow together. Even the best need time to adjust. A year later, they have. The menu has evolved significantly, the staff has changed and gotten cushy and the bright blue fish tanks rest in the background, illuminating the restaurant rather than taking central stage.

Matambredipped in a citric tamarind adobo before being tossed on the grill fills each mouthful with a tangy sweetness. The strips are sliced closely along the grain, making the process of using chopsticks rather than fork and knife to tear away bits of flesh feel satisfyingly primal.

A grilled salad stuffed with bok choy and other root vegetables is dressed in delightfully sour soy sauce vinaigrette. Chewy ovals of fried rice paste are nice surprises. Seared slices of beef, cut into thin sheets and laid over white rice, are topped with an egg yolk cooked in cold soy sauce and mirin. The yolk condenses enough that it doesn’t spill over and get lost in the rice but rather spreads evenly over the miniature steaks which crunch and sound with the help of fried shallots.

There is barbecued pork belly slathered in a deep red sauce topped with grilled prawns over a nebula of garlicky mashed potatoes. It is here, possibly, that the nod to Argentina is best executed. It exists in a space unlimited by the geography of tastes, rather, playing with the best of two worlds. It is, I think, exactly what Niño Gordo has ambitiously set out to create.

Open: Tuesday through Sunday from 8pm to close