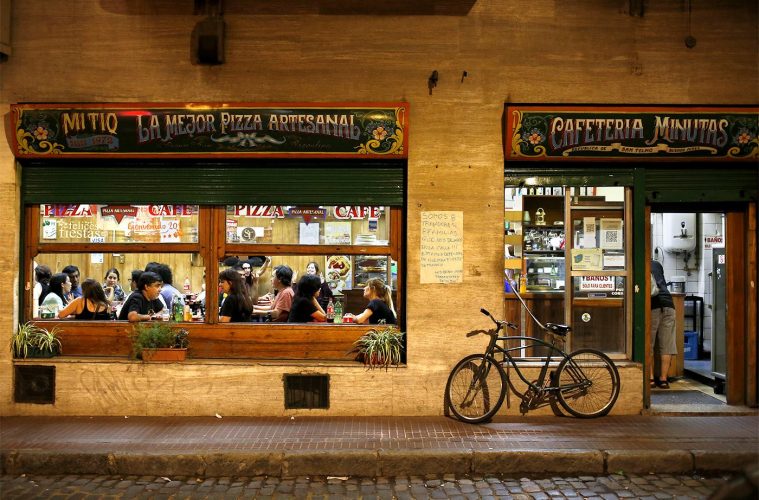 Pizzería Mi Tío: The Little Co-Op That Could

As kids, we would always hang around Palermo Chico, Barrio Norte, maybe Belgrano, belonging to to an “ambiente bien” as we did at the time. But the city had always called and pulled us further from home, and later on, when thanks to our parents who decided not to raise us in a nube de pedo and the insistent curiosity we had inherited from them — we’d venture to other destinations, with La Boca and San Telmo being our favorites.

The corner of Mi Tío has always seemed so genuine to me; picturesque without being pretentious; a place where those with lives long-lived had coffee, where you had real food, proper pizza and minutas, made with love. All set on a  beautiful corner; way before the Starbucks and the birrería craze and fancy design shops took over the neighborhood. You could find the parents of a much loved friend of mine having coffee there every Sunday. It was also the place where we could crash the toilet with some fluid retention emergency: we’d stroll in waving at the super friendly employees as we’d intoxicate ourselves with the aroma of freshly baked pizza. It our favorite pizza place since forever, the site of countless lunches or dinners.

On March 29, 2017 the owners of Mi Tío left their dedicated employees without a job after going bankrupt with no notice at all. When this happened, the employees had not been paid their salary for months, nor the last two aguinaldos and holidays, and their retirement deductions had not been made just as long. And so they decided to start a worker’s cooperative organization, and recover the business despite the economic mayhem of the time.The walls of the restaurant were covered with handwritten posters telling Mi Tío’s latest chapter: how they organized themselves, the number of people who participated, their goals and their strong belief in the importance of the cooperative work, in not depending on a boss who was, more often than not, a selfish and unjust tyrant. Mi Tío was now a referent, an example to follow.

On November 18th the Gobierno de la Ciudad closed down Mi Tío. The cooperative was missing one form  required to get the restaurant licence, a form that was not transferable from the previous registered name, despite the fact that the local Justice had granted a permit allowing the restaurant to function in the meantime. All this happened right before the holiday season that capped a year with approximately 50% inflation, skyrocketing tax and service fees, a massive backslide in human rights like nothing we have experienced since the return of democracy, and of course, the massive economic recession that is still underway. Being a cooperativa, the days they stayed closed meant nothing but loss; they were behind in the payment of the restaurant’s rent, and had no income whatsoever for their own needs or those of their families. To survive these trying times, the workers put together a delivery and catering service and organized a festival at (their) corner of Defensa and Estados Unidos with live music and food on Saturday, December 22nd, proclaiming in signs and chants:“De Mi Tío No Nos Vamos”. Everything raised that day went directly to the workers so that they could bring something home for Christmas and New Year’s.

The Wednesday prior to the festival – a month and a day after they were closed down –  the bodegón was able to reopen its doors. And on that Saturday 22nd as I walked down Estados Unidos, I saw the corner as bright and alive as ever: Camila Carabajal was rocking her folklore on stage (she did an amazing Spanish gato cover version of The Stones “Paint It Black” which blew my mind), food danced its way to their customers in the crowd,many of whom sang or danced along to the chacareras and gatos, foreign passers-by marvelled at the festivities and neighbors came out and watched it all from their windows. It was a celebration of and for those who struggle for the right to work outside the figure of a boss, or “la patronal” as we call it in Spanish.

These days, the coop of Mi Tio  have started the paperwork so that the restaurant is considered a protected, historic site (APH – Area de Patrimonio Histórico in Spanish). Once this is completed, “the license should be granted in a matter days,” says Adrián Fernández, waiter at Mi Tío for 14 years. “However, to be recognized as an APH is a long and costly process, and although the FETRAES (Federación de Trabajadores por la Economía Social) helps cover these partly, the rest depends on the restaurant’s income,” said Fernandez. So the rest will  covered by the workers, on top of the usual monthly expenses.

You only need to go in and look at its walls to see all the messages of love and support left by customers to realize that Mi Tío is already a local heritage site. And in hard times like these, when many of us find ourselves thinking twice when it comes to where to shop or grab a bite, it would be nice if the answer is somewhere where our money has more value, somewhere where it goes straight to the hands of its workers; workers who are the living proof of overcoming adversities, of the never-ending and continuously renewed struggle, hope and faith that comprise a cooperative, and who, on top of everything else, make and serve great food.