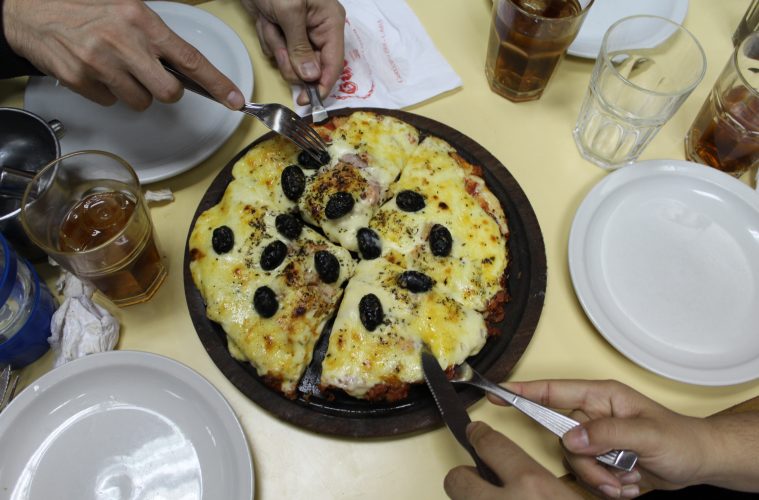 Pizza in Buenos Aires often gets a bad rap—mostly undeserved and mostly from foreigners looking for nostalgia in the form of cheese and bread. It is a dish as ubiquitous as choripan and empanadas with a long-standing history that dates back to the late 1800s. No one is totally positive when the foccacia and faina brought over by the Genovese turned into the pizza al molde we know today but currently more than 2000 pizzerias dot the city. It easily dwarfs any other kind of eating establishment.

Talking about pizza in this town is like getting a knock on the door from a pair of missionaries—everyone’s favorite pizzeria is the best spot and they are not going to stop ringing the bell until you convert.

We’ve all felt the hunger pangs that have pushed us into an Ugis although for a simple pizza a la piedra, I will always live by the gospel of Jaimito. For good Italian style pizza, I don’t mind waiting an hour for a table at Siamo although Roman pizzeria Cosi Mi Piace makes a heavenly blood sausage and poached egg and you can get a fried pizza at Sao Paolo that taste like a savory carnival donut. I’ll take a subway and a bus to get to Bandini deep in the depths of Villa Urquiza to have the artichoke and capers. For the best fugazetta, I’ll always hit El Cuartito (sorry Mezzetta). For a greasy napo and fried empanadas, its Pin Pun although you can also take me to Imperio (the original not that whack as Villa Crespo version). For ‘pizza concheta’, Los Maestros, where you can order the entire menu by the slice—grab the slice with fried egg and bell pepper. And if I’m coming down on a fernet fueled night, there is zero shame in ordering a cafe con leche and muzza at Kentucky.

I went to Güerrin three times last week. Part of this was a personal challenge. Güerrin turns out a reported 1,800 pizzas a day and boasts a menu of more than 100 different flavors. Most order the standard muzza—it has a half kilo of cheese—but there are also entire sections dedicated to fruit, mayonnaise and asparagus.

The waiter’s eyes popped out of their sockets when we ordered half roquefort and octopus, half fried egg. Who would have known that blue cheese and octopus is actually a good combination. The octopus had just enough of a chew to contrast the extra crunchy dough and the roquefort, layered with mozzarella as well, was just sour enough to pull out an extra kick of flavor. I wouldn’t repeat the fried egg. The egg was overcooked and the yolk felt too close to a hard-boiled crumble than a more dignified wet yolk to soak the slice in. We also had a forgettable glazed ham and shrimp; it was regular ham cut a little thicker.

I will likely stick to my regulars eaten at the bar with a small glass of moscato and soda, such as the fugazzeta with ham and onions. The onions crunch loudly and have just the right balance of sweet and acidic. It is superior to La Mezzeta, which is basically just a flood of insipid cheese topped with insipid onions. Don’t send me death threats, please. It comes just under my actual favorite fugazzeta at El Cuartito. The napo should be enjoyed with a crispy slice of faina and the muzza is a step up, mostly in volume, from your average basic bitch cheese pizza. The lactose intolerant nightmare gets brown and bubbly and takes well to the poorly named ass burner hot sauce.

Open: Sunday through Thursday 11am to 1am; Friday and Saturday 11am to 2am

Price per person: slice and drink under $100, whole pizzas and drinks $400