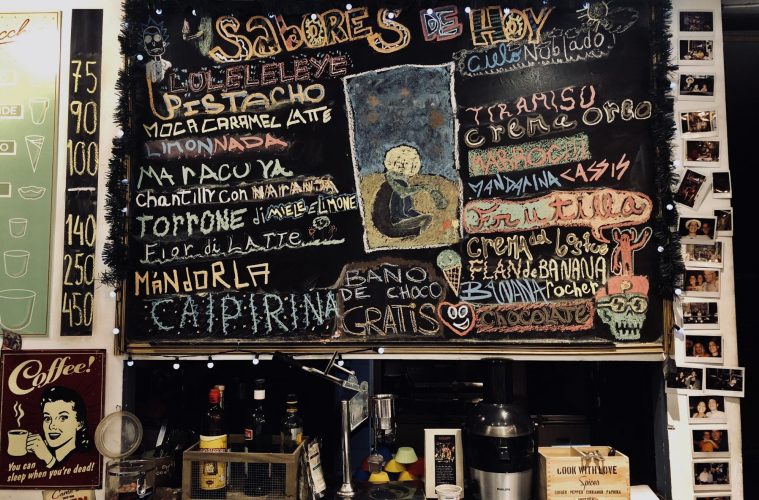 The Fantastic Flavors of Pistacchio Helados

Pistacchio doesn’t look like a heladeria. There are no white walls or white tile, no sleek metal countertops. Instead there is a psychedelic mural in the entryway, wingback black and red chairs, and small tables with Pac Man designs made with mosaic tiles.

On the back wall is a chalkboard with cheeky flavor names  — luleleleye (sound it out), cielo nublado (crema del cielo with marshmallows) — handwritten in brightly-colored chalk. Martin, the the founder, stands behind the counter. He wipes an old flavor away and writes a new one in its place: limon“nada”.

As a self-proclaimed helado fanatic, I’ve made a point of trying any new or out-of-the ordinary heladeria I get word of. In four years of sampling helado all over Buenos Aires, Pistacchio beat out all the other contenders for my go-to, #1 out-of-this-world heladeria by lightyears.

I had the pleasure of sitting down with Martin, the man behind the magic, to learn the story behind Pistacchio and how it came to be.

Pistacchio in the beginning

“I wasn’t born wanting to make ice cream.” he confesses. “I had a ton of ideas, but they were just ideas. Nothing concrete.”

So when his father announced he was closing his heladería in Cordoba in 2006, Martin asked him on a whim to send the equipment down to Buenos Aires so he could open his own shop here. And Pistacchio was born.

Despite growing up in a family of gelataios and helping prepare ingredients in his father’s heladeria, when Pistacchio opened its doors Martin had never made ice cream before.

“It took a while for the shop to feel like mine,” he tells me, glancing over to the counter. “I didn’t know how to make ice cream for the first two months.” His father came down and stayed for the summer to pass his knowledge from father to son. “My dad came did everything and I watched, then I helped him, and then I took over he watched. He was a great teacher.” 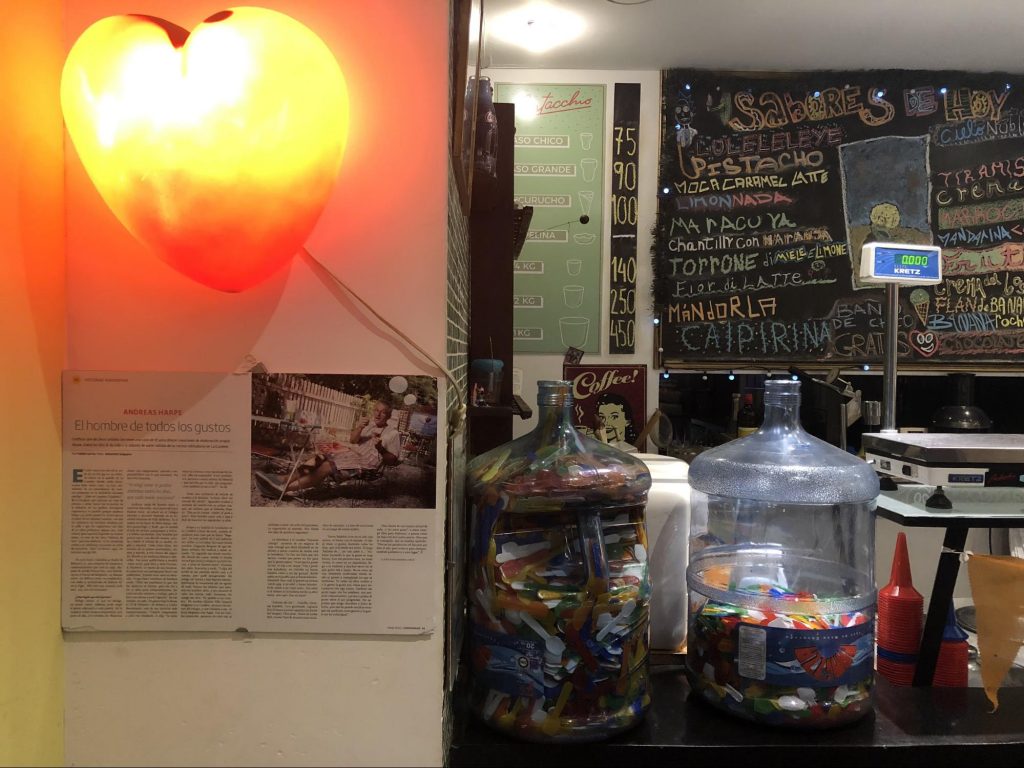 An article dedicated to Martin’s father, Andreas Harpe, and his heladeria in La Cumbre, Cordoba

Pistacchio has been up and running for almost exactly 12 years now, and Martin has undoubtedly mastered his trade. “My father didn’t just teach me to make ice cream,” he says. “He taught me everything that goes along with it. Cleaning, order, organization, how to respect a schedule, and how to be consistent in everything.”

“Being consistent is important,” he explains. “If the lemon flavor turns out really well, I need to remember why.”

These things didn’t always come naturally to Martin. When he first started to learn, he would roll his eyes when his father would insist on things like precision that seemed unnecessary to him. “Later I realized he was right, and I would repeat details that seemed insignificant before to the guys that work with me now. Later I realized how important they really were.”

“I was never consistent with anything in my life,” he adds. “And when I started things here, no one thought I could do it.” He joked that his mother would tell him lovingly, yo no te tenia fe, mi amor! “It was a little bit of extra pressure, knowing the family was looking at me. But I ended up really liking it.”

A customer walks in, and Martin stands to return behind the counter from Pistacchio’s indoor patio where we’re seated. He takes the man’s order and gives him generous sample of the new pera + jengibre flavor to try as he packages up a medio kilo and waves goodbye, calling the man by name. 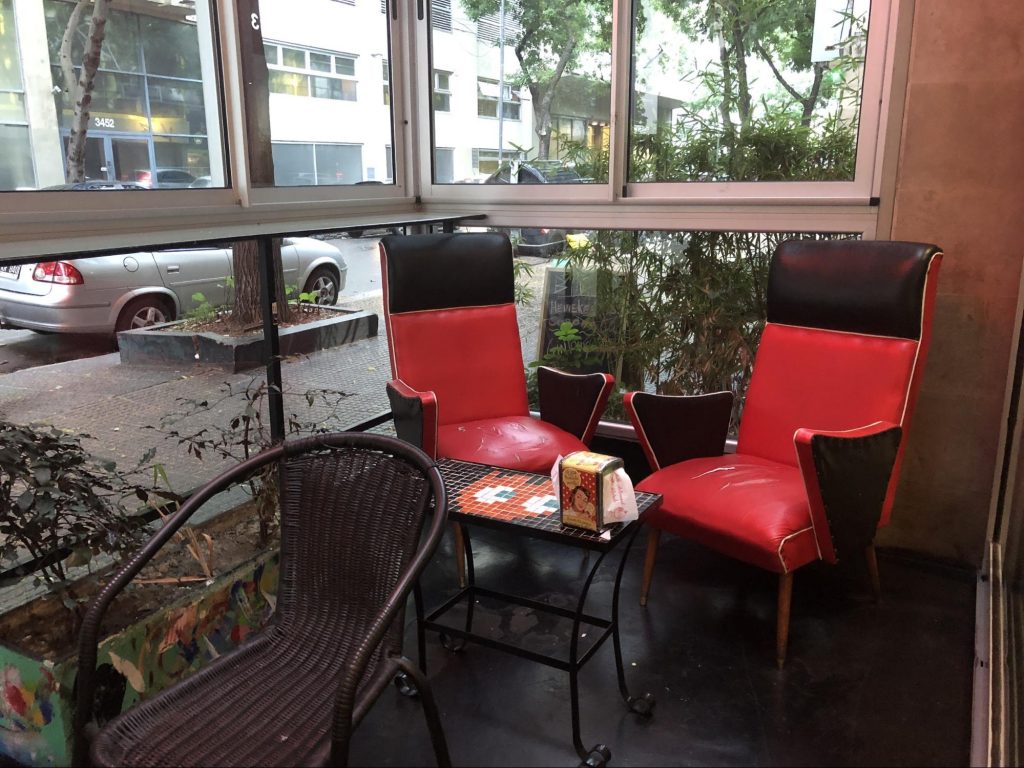 “I know most of the people who come in here because they’re the neighbors,” Martin explains as he sits back down. “Basically, it’s just regulars. We’re not really on a busy avenue…I like to make ice cream for the neighborhood. They’re the ones that really keep the shop going.”

Martin has the kind of niche knowledge of his patrons that only an invested long-time local possesses. He knows, for example, that there’s four or five people who are superfans of one flavor because it tastes like a specific strawberry yogurt they ate as kids. He knows that when he makes it, they’ll be in and they’ll take home a medio kilo. “The effort and the dedication we put into the ice cream is for them.”

Up on the wall are some painted quotes in bold colors. One is credited to “Lui,” a friend and fellow restaurant owner of the local gem Roll’n Lui. It reads, “Where expectations end, happiness begins.”

When new people come in, Martin feels a lot of pressure. “People come who have never been, and they have this idea that this ice cream that’s going to change their lives. They might come on a Tuesday when I’m just opening, there’s not a lot of ice cream yet.” It can be hard to meet expectations when things vary so much from day to day.

I let him know that on my first visit, I’d come in with high expectations and was not disappointed. I asked for a recommendation, something refreshing. Martin had me try the mandarina, and I agreed, even though I never would have chosen it for myself. It’s now my favorite flavor. I ordered a quarto kilo on the spot and now I look for it every time I go.

The many flavors of Pistacchio

If I don’t see mandarina up on the chalkboard, I know there are a handful of potential new favorite flavors I just have yet to try. Every time I come in I discover a new one, because the flavors at Pistacchio are all excellent, and because they rotate often.

“I make a new one whenever an old one runs out.” Martin tells me. “I always have chocolate, dulce de leche and pistacchio… Chocolate and dulce de leche are classics, and we have to have pistacchio because… well, people have come here from far away looking for pistachio ice cream.”

Besides the classics, Martin tries to always have a few fruit flavors. Most heladerias don’t use real fruit, he explains, because it’s a lot of work to juice by hand. The title of the grapefruit flavor, 34 Hermosos Pomelos, pays homage to the work that goes into making it.

At any artisanal heladeria, there’s a good chance they make their ice cream there in the shop. Making the ice cream in-house is important, Martin explains. “It’s like eating an asado. Eating it reheated after three days isn’t the same as eating it when it’s made,” he adds, seamlessly tying together two pillars of the Argentine diet. “Most places just rent a big space and make a ton of ice cream there… You could be eating helado de chocolate that was made three months ago.”

For Martin, making new flavors is a balance doing things with love and having the freedom to experiment. “If you do something with care, and you don’t burn it, chances are it’ll turn out well…I try to take advantage of all of the products as much as I can, partly so I’m not wasting anything, and partly because it tastes good!”

A lot of the time, when an old flavor runs out and he’s working on a new one, he just starts and sees where it takes him. “There are lots of flavors that I don’t have planned. I just see what I have in the kitchen – we have that kind of freedom here.”

The rotating chalkboard is key to maintaining flexibility. It’s fun, and it allows him the freedom to swap in new flavors as he creates them. “It’s a beautiful kind of freedom, to combat the routine of having to always have the same flavors.” It’s also a way for him to keep track of flavors that don’t work as well. I know that if there’s a flavor up on the board for a long time, he knows it’s not one that people ordered often. “If people really like a flavor, I try to make it often.”

Even though it seems obvious, people love being able to taste what they see written on the board. “If it says banana cinnamon, it should really taste like a banana and really taste like cinnamon, with the two flavors complementing each other without one overpowering the other.” “Hacemos helado de, no con sabor a” is Pistacchio’s motto, and it it consistently true.

Every flavor at Pistacchio is made fresh and with so much intention, and it shows.

“I actually eat very little ice cream,” Martin laughs. “I just try it when I’m making it… I enjoy it, but I mostly enjoy it because I know that other people will like it.”

Visit Pistacchio and try for yourself at Santos Dumont 3429 (Santos Dumont y Niceto Vega). Whether or not you’re from the barrio, it’ll turn you into a regular. 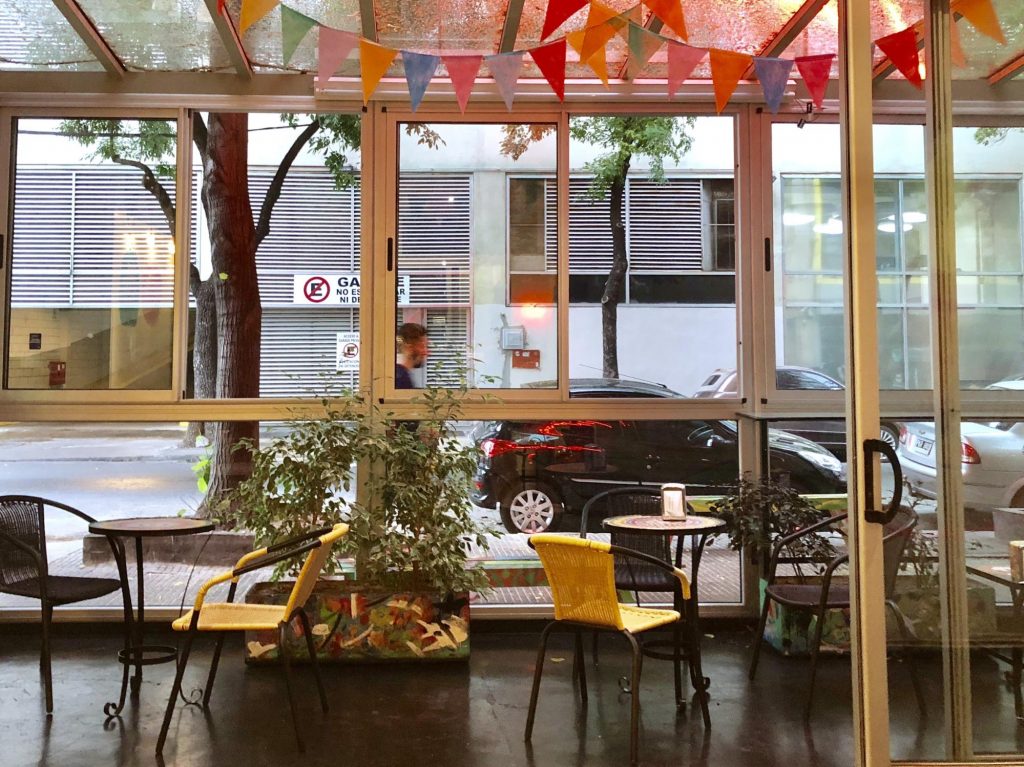 Fun facts:
– The rotating chalkboard and baño de choco gratis were ideas that were inherited from Martin’s father’s shop in Cordoba.
– Martin’s favorite flavor is lemon (al agua, obvio), or any variation of lemon.

– Most of the art and decorations in the shop, including the pac man tables, were done by friends, family or Martin himself