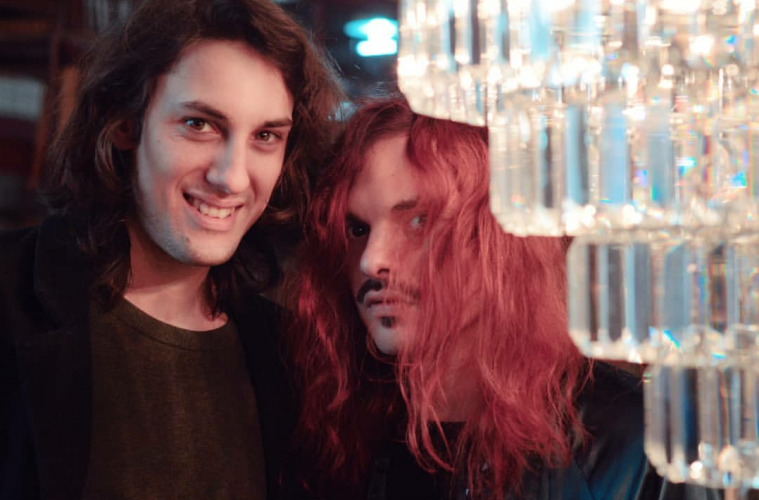 Our interview with stoner-rock band Katon from Chascomús, right before their opening set for The Oh Sees in Xirgu Espacio Untref in San Telmo

Whether it’s a tapping hand, an appreciative nodding head, or the full on body sway— I’m an embarrassingly expressive music listener, physically speaking. I’ve elbowed more than my fair share of bus goers during a particularly satisfying playlist find and woken up far too many times with a throbbingly stiff neck post live show. I’d say I’m an easy-to-read kind of fan.

So, naturally, the first time I heard the fast-paced riffs of Katon my hand began to tap my thigh, my foot slightly stomped, and it felt like my head had a whole life of its own. Now I’m not saying their music is dance-y, that’s the entirely wrong type of description for this rock band. It’s powerful. It’s loud. It’s not so dance-y as it is…head-bangable. It’ll get you moving so fast you won’t even realize you’ve almost knocked the borrowed headphones out of your ears.

Katon hails from Chascomús, the beautiful provincial town about two hours outside the city, known for its beautiful lake and weirdly large output of talented musicians. The band is made up of Furia (guitar and vocals) and Fran (drums). They’ve had a rotation of bassists throughout the years, but so far none have stuck. Self-described as power trio on stage, (they are currently joined by bassist Dami) they’re “a duo before adversity.”

Meeting Katon you get the sort of impression these two are lovable former shit-heads, reformed shit-heads if you will. Former stoner-rockers that have since strayed from pigeonholing themselves to one style, having adapted a higher level of social consciousness and intentionality. It’s clear they care deeply about the ways they engage with both the music scene and the positive messages they want to promote. It’s clear that while dedicated to their sound, at the end of the day they’re two good friends, having a good time. With a fresh new single released earlier this week and an opening gig for Thee Oh Sees tonight we’re excited about the future of these boys. We thought now would be a great time to check in and see what’s up next for the band.

You’ve been described many times as stoner-rock. What do you think about being classified in this genre? Is it a good description of your musical style?

Musical categories always leave things out of what can be the experience or sound of a band. Ever since we started and around the time of our first album, you could say that we fit the bill for stoner rock, but being a band is a process of being open to new sounds. Perhaps with where we’re headed now we might not fit so easily into this category. We like to think that we are a rock band with a ton of influences. We have so much more to discover and implement into our future songs. The good thing is that we have no idea what will happen in the future. We’re focused on the present and what happens to us, without that sort of fanaticism or worshiping of one particular style. The word stoner-rock puts bands on one side, in the same way indie-rock puts you on a side. Are you stoner or indie? Fuck off! At some point calling the heavy sounds stoner and the softer sounds indie became a novelty and that’s where those vampires of the night appeared to take advantage. Maybe we’re moving away from these types of events that are typical of indie or stoner-rock. When it saturates, we get tired of it, and that opens up possibilities to experiment with new things. We like music when it’s music! We’ll never stop listening to bands like Kyuss, Sonic youth, Fu manchu, Pixies and more.

Tonight you’re playing with Thee Oh Sees. As one of your cited musical influences, how do you guys feel?

Earlier we talked about new experiences, but Thee Oh Sees won their place at the top of the pyramid years ago. We started listening to Fuzz (Ty Segall’s band) which was recommended to us by Pablo and Sylvie from Rockcity. From there we got connected to them in the summer of 2015.

Furia: Chascomús is a great place to relax and during this particular year there were days where Fran chose to stay in. He’d lay down and listen to Thee Oh Sees. I remember doing the same on various occasions, clearly accepting my friend’s recommendations. In a matter of days, I found the songs “The Dream” and “Sticky Hulks” and knew I was entering into something incredible and new, and it was.

Thee Oh Sees connect us, not only the two of us but a ton of our friends. If we’re hanging out it’s always better with an album like Floating Coffin playing in the background. Playing with them will be incredible. Above all it’s going to be a beautiful day with friends and all the people that come out tonight to Teatro Xirgu.

Your last album was released in 2015, but two days ago you released a new single. How does this new project compare to old ones?

We just released our new single “Baku Surfer” and you can only listen to it on Bandcamp because it’s the pre-master. Pajaro Raynoldi from Crudo Studio is in charge of the mixing and the final master will be mixed by Carl Saff in Chicago. We won’t be releasing any of his mixes until February of next year. This new album brings forth a different sound than the last one had. A huge part of it was composed by the two of us improvising on guitar and drums. You could say it’s more garage, a kind of improvisation with beer, just hanging out, making some riffs, and then later molding them into songs. Compared to our first album we focused on changing the sound of the band in general. The Mesa Boogie amp and the wooden drums were no longer our first choice. Instead, we opted for Ludwig Supraphonic snares and guitar equipment like the Twin Reverb and Ampeg vt-22, accompanied by a Fuzz. We came up with shorter songs, maintaining that power while still incorporating new songs and styles that reflect some of the bands we were listening to during those rehearsals.

Fran: While we don’t have a defined process, in general, we stick to improvising off riffs during our rehearsals until something captures our attention. From there we try to deepen it. Other times Furia gets inspired and throws out a more refined or worked on a riff, but normally it’s a mutual process born out of rehearsals, each of us working with our instrument trying to follow the language of the other. We have the good fortune of almost never talking about it at the same time we’re composing. The things come out themselves and if they aren’t, we prefer to play games or watch videos of other bands. We don’t like to force things that sooner or later come out themselves. At the same time, however, we’re very conscious of our commitment when we have to get things done. We made 6 out of the 9 songs on our new album in only 3 months, meeting only once a week because we live in different cities. 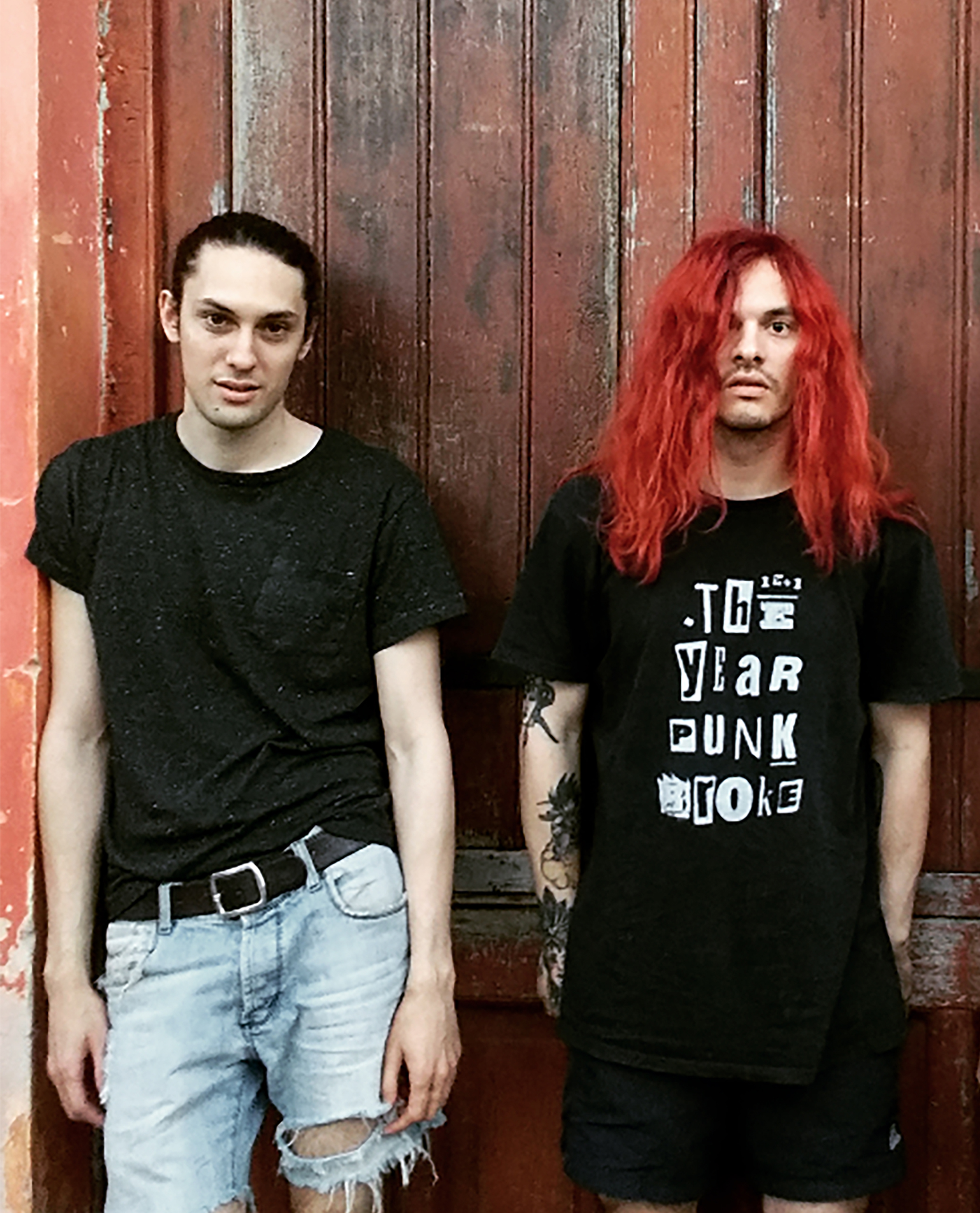 What do you draw creative inspiration from?

We are people with really different styles of living in some aspects, but we tend to coincide in many others. It’s this friction that makes way for a great exchange. We try to not overthink the inspiration; it’s open-ended for each person individually. But for sure the experiences and emotions that we experience throughout our lives we like to translate into songs with lyrics that the people can listen to and enjoy. So pretty much we suffer for the benefit of everyone else! Haha no just kidding.

What is one of your biggest criticisms of the independent music scene here in Buenos Aires?

We don’t like the circuits that form a sort of cult for a style where there isn’t an option for new movements or opportunities to mix with other people. We had the opportunity to have our own space for a minute and we put on events where rock bands, DJs, and rappers all played together.  There were fairs,  live tattoos, graffiti etc. We were also lucky to have a place like Pura Vida in La Plata. Known as the “Temple of Rock,” the doors were open to whoever wanted to play, regardless of what they were playing, with 100% of the entrance fee that went straight to the bands, and incredible treatment by the staff. We recommend the movie El templo del Rock directed by Osvaldo Sudaka, where everything we are saying is explained with a ton of details with images and songs. We don’t want to be critical. It’s better to recommend this and have the rest of the people adopt this way of making things, as it’s healthy!

What can we expect from Katon in the upcoming few months?

On a personal and societal level, this year was complicated.  Nevertheless, we were able to organize ourselves and continue making various interesting things, some we already have ready and others that we still need to do. Katon is a world where we still have so much to explore, but for now, we can say that we will release new material and start playing more live shows.

Okay, time for the speed round. Dream instrument:

Fran: Nick Mason’s drum kit from the sessions at Pompeii.

The first album you ever bought:

Three bands that inspire your sound:

A song you’d want played at your funeral:

Furia: For years it’s been decided that Nico Lippoli from Knei has to play guitar.

A popular song/album you think is overrated:

Ideal venue to listen to a band live:

Who are the top 4 most interesting bands in the current music scene?

Katon plays tonight at Xirgu Espacio Untref in San Telmo alongside our friends Riel, Guli, In Corp Sanctis, and Thee Oh Sees. Doors open at 20:00 and they’re set to play at 20:30. Get down there early!