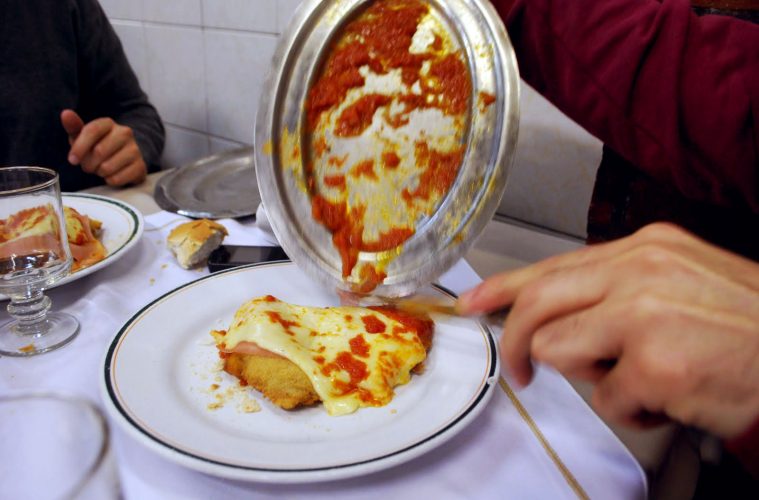 Since the beginning of time, Buenos Aires waiters have lived and died by the same guiding principle: care just as much as you need to. Until recently, with the influx of cafes and restaurants where the all white smocks have been traded in for skinny jeans and backwards caps this was the golden standard. Stare into the abyss while taking an order, respond to all queries with your most convincing si, excelente, joke just enough to hold on to the tawdry tip gifted at the average bodegón and only show a glimpse of humanity when, much to your chagrin, the table hasn’t ordered enough meat and carbs.

At Rondinella, the tradition has remained stuck in the time capsule. Like extras in a film the servers all blend into the scenery and have barely audible lines. The best way to blow your cover is to crane your neck from side-to-side rather than let the waiter come to you. They’ll arrive. Eventually.

Bodegones can be a tricky place. Each and every one has a specialty and rarely is the message written clearly on the wall for passerby. But the bloodhounds know that you go to Albamonte for a thin pizza appetizer before gobbling down the albondigas de ricotta. Or that for a good milanesa it’s between Los Orientales or Don Ignacio; the former for over-sized chicken supremas and the latter for thinly pounded veal. Nearly everyone sells fried rabas but the most gluttonous come from El Centro Montañés hidden in the dark depths of Colegiales. Il Vero Arturito has killer escalopes a la marsala, La Mamma Rosa tosses out the city’s best eggplant lasagna (if you can find it underneath all the cheese) and Miramar has an oxtail stew with a dark brown both that so rich it sticks to the throat for most of the meal.

Every bodegón also has dishes you shouldn’t order. The best way to tell is ordering as seasonal as you can. At a bodegón, where menus are as heavy as a sack of potatoes and etched in stone, ordering ‘fresh’ is like walking through a minefield with a blindfold. Never order shellfish. Heck, stay away from the seafood section unless you are interested in tasting refrigeration and disappointment. Rabas are the only exception. Don’t order summer produce in the winter — strawberries a la crema in June, pass.

So let’s just get this out of the way: don’t order a milanesa at Rondinella unless you want to eat the equivalent of beef jerky breaded in soda crackers. Intel has also informed us to definitely not order the Suprema Maryland; limited rations may transform the fried banana into a slippery piece of canned pineapple making the already sinful concoction into a treasonous affair.

Do, however, order the burrata, which for bodegón fare actually tastes like cheese rather than the leathery Coto variety of the Italian staple. Also order a ration of eggplant preserves and paprika-laced lima beans to take down the bread basket. Sorrentinos are best when filled with cool spoonfuls of ricotta and tossed with pomodoro. Hollowed out fussiles topped with meat tuco sauce are a fine choice, too. And then get what you came for: pollo a la provenzal. Look around. It is what everyone else is eating. Chicken comes out as crackly as any good Peruvian pollo a las brasas and the juicy white meat is only made the more delectable as its juices pool outwards and blend in with the earthy garlic tinted provenzal.

If there is room for dessert (hi, it’s hot and ice cream exists) close the menu, say your goodbyes and grab a cone next door at Scannapieco.