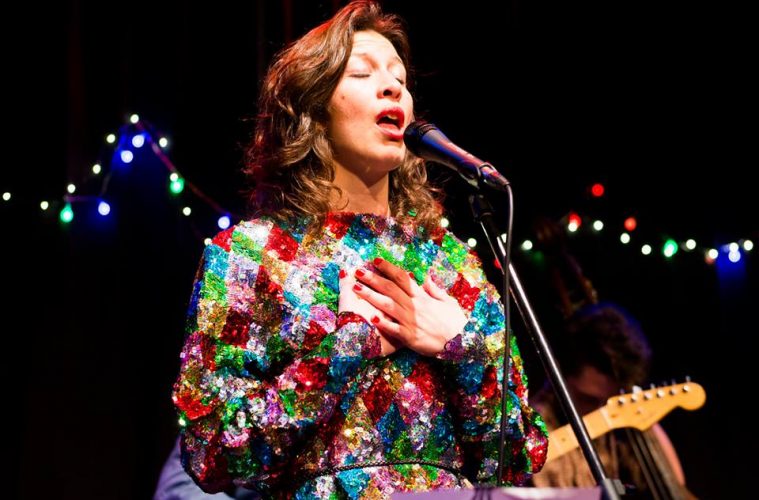 Happy Thanksgiving week! It’s a holiday I insist on celebrating despite that fact that, one, it’s rooted in a history of imperialism and genocide, and two, I live in a country that doesn’t even recognize it. What can I say? It’s food and family. As for the turkey dinner, a milanesa with puré de papa will have to suffice. But there’s no substitute for LIVE MUSIC – and this week, we have a lot to be thankful for!!

Yolanda Discos invites us to enjoy free live music this Wednesday afternoon in Parque Rivadavia, and Fonso returns to Buenos Aires with an XL-sized performance. This event will mark the close of the city-wide Barrios Creativos contest, in which neighborhoods compete against each other through the creation of teams to promote, fund, and manage their art and culture, and the presentation of a final project to showcase their collaborative accomplishments. Fonso is a 21-year-old musician and producer from Castelar, Buenos Aires Province. Among his releases is the 27-track album Some Plays, whose songs vary in genre from experimental hip-hop to classical. The event will also feature a theatrical performance by La Pipetuá, and more live music by Miss Bolivia, a project that fuses cumbia, dancehall, electro, and reggae.

Mexican singer-songwriter Paola Ventieri presents her debut album backed by a full band of invited artists. Colores Brillantes is an eclectic album full of fresh and innovative songs, with a unique style that combines different musical genres such as pop, rock, bossa nova, jazz, and chanson française. Her accompaniment will consist of guitarist Marcelo Filippo (of Filippo), drummer Gastón Otero, and bassist Beno Guelbert. You can buy tickets in advance by clicking on this link.

The return of his Imperial Majesty Silverio, prodigal son of Chilpancingo, Guerrero (Mexico), has officially been announced. After his two presentations last year in Buenos Aires, his presence was requested once again, and shall thus be granted. “The punkest show after seeing Ricky Espinosa,” and “one of the best shows of 2017” were some of the descriptions of Silverio’s performance that circulated after his last visit, and there’s no doubt that this time around will be even better. Come out to Palermo Club and fill your souls with pinche rhythm! Local invited artists Kumbia Queers, Paltax, Pinchado and a DJ set from xEGOVIA will be warming up the stage, for what promises to be a night of delirium without limits. You can buy your ticket in advance at this link.

Ah, Thee Oh Sees. I remember the first time I listened to them. “Now, this,” said my friend, pulling the vinyl out of its cover, with a level of drug-enhanced enthusiasm that italics could never come near to capturing, “is some… heavy psychedelica.” Thee Oh Sees is a band from Orange County (O.C.), California, who started out playing garage punk. Over the last decade their sound has expanded to include proto-metal, dark-psych, and trippy prog. Local bands Riel, Katon, Guli, and In Corp Sanctis be opening for the Californians. This will be their very first show in Argentina – let’s bring out a crowd and make it a memorable one for them! You can buy tickets in advance at this link.

This is a HUGE EVENT! So huge, in fact, that we published an entire article on it. Also, it is happening not just on Saturday, but Sunday too. AND, it’s free!! This month, Club Cultural Matienzo, a “bastion of the DIY indie scene,” and one of La La Lista’s personal favorites, celebrates its 10th birthday. Existing as a venue that supports independent art and culture in the volatile economy and politics of the city of Buenos Aires has been no small feat – so, as such, this will be no small party! The first installment of the party is from 9PM to 5AM on Saturday night, and it will continue on Sunday from 3PM till 10PM. To see a full list of the performers, you can visit Matienzo’s website.

It was an angel of good fortune that led me to cross paths with  Yuli y Tonga  during my first year living in this city. I fell in love with the unique timbre of their voices, in which there exists a strange sort of youngness-and-oldness (imagine the sweet innocence of a child’s voice and the soft wisdom of an elder’s voice, at the same time); their at once simple and charmingly awkward, yet perfectly put-together multi-instrumental arrangements; their matching hair cuts; and their glowing personalities. The folk-pop duo is comprised of two members of the indie pop band Niños Envueltos. They have been known to play stripped down versions of Niños Envueltos songs, a few select covers (including Los Punsetes’ “Maricas,” Larbanois y Carrero’s “Zumba que Zumba,” and Franco Simone’s “Paisaje”), as well as Yuli y Tonga originals. At this show, they will be premiering the music video for their song “Talento,” which is being released in anticipation of the upcoming release of their debut album.

The ritual begins at midnight on Saturday. We will hear Los Subtítulos, an alternative post-rock group whose songs vacillate musically between the dark and sinister storm cloud and its hopeful silver lining. We will hear Playa Sintetica, a surf-rock group whose songs bring the listener from beach parties, to beach funerals, to mysterious pirate ships. And we will hear La Noche Que Estuve A Punto De Morir, a psychedelic folk group who wills the listener to meditate on their mortality, while dancing to a groovy beat.

Saturday’s party continues into Sunday! See the full note above (listed under Saturday).

The record label Monqui Albino  invites us to revisit the 2015 EP “Parhú,” created by Vero Gerez​ and NachoChoro Elcolo, which features six soul-soothing folklore-inspired tracks. The EP is sweet and calming, like a lullaby sung next to a stream in forest on a sunny day. Everything in the arrangements falls perfectly into place – they are detailed, but not overwritten, with a wide variety of instrumentation and sounds that come and go at exactly the right moments, with Vero’s soothing vocals tying everything together. The video above shows some of Vero Gerez’ more recent work, in her duo project with Paloma Iturri.