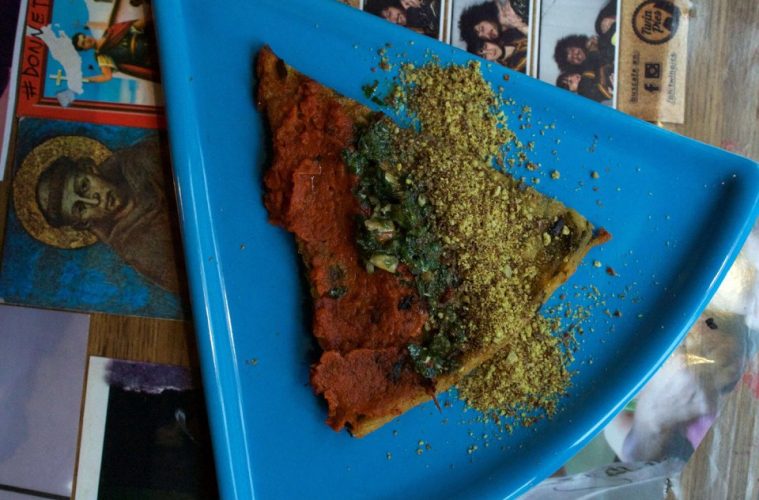 The first time I went to Donnet, a tight dining room carved out of an old chicken shop stuffed wall-to-wall with cook Manuela Donnet’s personal knick-knacks, furnishings, family photos and dishes and utensils, it felt like I was stuck after hours in a second-hand shop more so than a hip vegan bistro. Donnet is the kind of place more akin to a clumsy cultural center in the poorly lit abyss of San Cristobal than a restaurant — there is a naked Ken doll on display next to a kegerator someone painted a bright red devil on. Warrior women in brightly colored headdresses dance and giggle before bringing exotic looking piles of organic mushrooms to your table.

Donnet has since moved to a new location—bigger and brighter than its predecessor in the heart of the quickly modernizing Chacarita neighborhood. It took months to convince the owner of Los Tres Hermanos, a men’s club style cafe, to hand the keys over to a mostly female team of vegan cooks over months of begging and bribing in the form of roasted mushrooms and chestnut cream. And once the keys had been handed over, Donnet opened shop in just a single weekend. When you walk in, you’d barely notice the old men have left until your ears perk up to the sounds of Nelly on the stereo and the naked Ken doll placed prominently along the wall.

When the sounds of 90’s R&B start to make your head bob, it is time to switch from the cold pitcher of beer to a house vermouth. The vermouth has been infused with countless herbs, spices and citruses—so much so that it resembles a peppery sangria more than deep barrelled vermouth. Vanilla sticks on the tongue like a thick gloss and brings the summer humidity down a few degrees. I always end up with the faina con pesto y tomate, the quintessential garbanzo pancake that is haphazardly tossed into the oven until it has transformed into a crispy slice of pie that crunches loudly and squeezes out droplets of earthy olive oil across the tongue. Fresh slices of tomato are beaten down by the heat to a sauce that rests in the middle of a fresh summer pasta sauce and a rich tomato paste.

No need to choose one main, go with both mushroom dishes. Pan-fried girgola, or oyster mushrooms, form a golden brown crust along there wild ridges and long stems. They come with an improvised set of three sides like mealy butter beans dressed in pesto, starchy rice balls topped with a spot of fire red hot sauce and a peculiar glossy sweet dots pumpkin or squash. The hongos donnet lean away from ethereal flavors towards rich earthy tones cooled down by a silky fermented chestnut cream—they are sensations that remain on the tongue long after you’ve left Donnet’s little universe.

Open: Monday through Saturday from 7PM to midnight