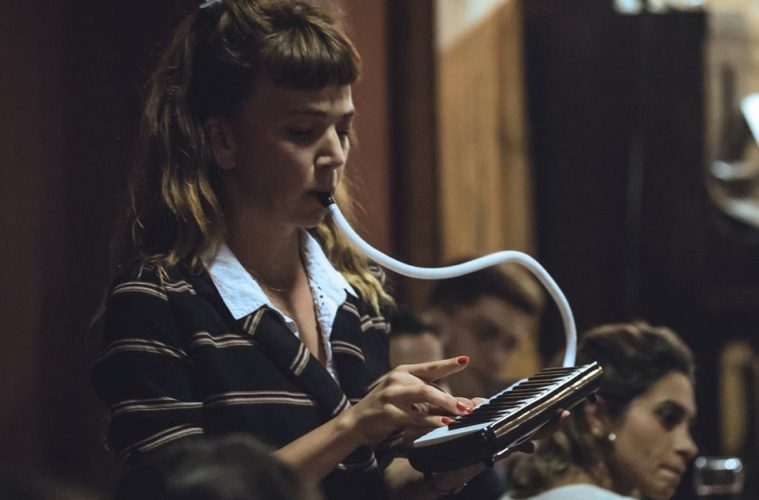 Eternal destruction of all that is holy is upon us now that the humidity levels are in full effect. But embrace it my sweaty, sweaty friends because this weekend is no time to cool-down in the comfort of your friend who lives with his parents and owns an air conditioner. There are shows to be seen! Mosh pits to be had! The world is exploding and this week’s agenda is the cause of it all.

I met Jennifer Moule, AKA Damsel Talk, when we shared the bill at a small acoustic ciclo about a year ago. We spoke briefly in our shared native language (she is from the UK) and became friends on Facebook. The very next week, I saw on my newsfeed that she had a gig opening for none other than Sir Rod Stewart, in Luna Park. Qué flash, no? Damsel Talk has been performing in Buenos Aires for a total of 6 years, if I am not mistaken; her performance is inspired by the circus, the burlesque show, and the theatre. She has been known to incorporate the ukulele, the guitar, and the charango, among other, less-conventional instruments. She plays a style that brings together elements of jazz, soul, pop, Andean folk, and tango, her voice shifting effortlessly between sweet and sultry tones. At this event, she will be accompanied by classical-turned-jazz pianist Nicolas Boccanera (of Nicolas Boccanera Trio), saxophonist Camila Nebbia (of Camila Nebbia Sexteto), and cellist Violeta Garcia. You can reserve your entrance by emailing info@virasorobar.com.ar or calling 4831 8918.

This event, organized by the host of local music blog Sonidos que Permanecen, will feature psychedelic post-punk Chilean touring band, El Purpurado de Charol. El Purpurado formed in 2013, derived from an earlier project called The Karma Cowboys. All of the band members are currently involved in other projects in the Santiago underground music scene, in addition to this one. They released their latest album, Un Lujo Sin Propósitos, in 2017. They will be joined with local support from horror-punk trio Mujercitas Terror and punk rockers Gumm Gun.

Lucille welcomes the second edition of the Freaks & Folks festival, which aspires to be an event celebrating folk…and beyond! For this edition, they have invited Karina Vismara, Dani Ferretti, Diente de Madera, and Jazmín Esquivel, four artists who bring to the table four distinct interpretations of the genre. Each artist shares both a commitment to the tradition of song and a drive to search for new sounds within that tradition. Tickets are available at EXILES RECORDS, Mercurio Disqueria, or online at  Passline Argentina.

This Friday, summer makes its entrance at the Malba Terrace on the arm of Julio y Agosto, the indie/folk group that has been a part of the Buenos Aires scene for over a decade. They will be presenting their latest release – two three-track EPs which came out at the end of July 2018, called, collectively, La Ceremonia, and respectively, Los Accidentes: Capítulo 1 and El Movimiento: Capítulo 2. Regarding this release, the band stated that: “The last two years have been a challenge and a battle for Julio y Agosto. In many ways, we have faced our own ghosts and have had to learn how to support each other, and through this process we built the refuge of La Ceremonia. This album is not a story of that journey, but rather, the musical landscape that we were constructing throughout the duration of the battle with those ghosts. And when did the first ghosts appear? Right when the accidents began.”

Unidad 01 is celebrating the close of their tour, “Retorno a lo que vendrá” (a return to what is to come) at this event which they have been organizing, with much care and dedication, for several months now. With their sights set toward the release of their next LP, they will be saying their goodbyes to their debut self-titled album, and giving some sneak previews of what is to come (hehe). There will be on-stage visuals by Virtual Light, and a DJ set by Mitch Conner accompanied by Sin Tierra Audiovisuales. You can get your tickets through Alternativa Teatral, or contact the band via direct message on Facebook, Instagram, or the WhatsApp number 1158109675.

Clásico Fernandez opens its terrace once again to receive an acoustic duo and an acoustic trio. Luz de Azabache is a duo comprised of Sebastián Luna on guitar and Josefina Ilundain on vocals. The duo formed in 2017 with the hope of bringing audiences some deeper cuts of Argentinian popular music. Lacruz – Heler – Nikitoff  is a trio of three tango guitarists which formed in 2008 at the Escuela de Música Popular de Avellaneda, where they are all professors. Through their interpretations and arrangements of popular music, as well as their own original compositions, they aim for modern expression with a foundation in the traditional. The event starts at 21:30, and I should mention that the live music at Clásico Fernandez ACTUALLY STARTS ON TIME (and by “on time” I don’t mean Argentinian on time, I mean dead-serious-for-real-no-joking-around on time).

Lost, like a ship adrift at sea, we are dragged along by one or another current, bobbing to and fro with no destination. The captain who insists on a northward course is met with tempests – he or she who turns their course southward, finds the answer. And here, this Friday, creating constellations to guide our way southward, is this, the fifth edition of Infinito. Jupiter Call, a duo hailing from outer space, comes as an electro-pop harbinger of tonal destruction. Maquillaje, with a shoegazey sound and Florencia’s sweet voice, brings us through sonic landscapes that connect us with our essence. Singer-songwriter Sofi Flores brings us the modern-day 90s, with lo-fi sound and up-beat melodies, and reminds us that sometimes the simple conveys much more than the complex.

Ten years after the release of their debut album Una Especie de Mutante, Go-Neko!, a space-kraut-rock band with a wacky sense of humor, is getting the band back together for a one-time-only, can’t-miss celebration of its anniversary. When asked to describe themselves, Go-Neko’s response is: “I’ve wiped out homes with whole families, obliterated Vietnamese villages…it’s time that here and now, we make it clear who the real bad guys are.” The space-kraut-rockers have invited post-rockers La Venganza de Cheetara to open for the grand occasion. Tickets for the event are available at Untref’s ticket office from Wednesday until Friday, 4PM-8PM, or online through Plateanet.

The recurring movida we know and love, Haus Party, is moving to a new venue in Villa Crespo/Palermo for a super-special edition! Anajunno and their shoegaze magic are visiting us from Santa Fe, and locals Los Aullidos will make our hair stand on end with their electrifying folk rock. And, of course, there will be a set from house dream-pop band Fervors, whose music was once called “ethereal hipster nonsense” by a snobby detractor (heck, it sounds like my cup of tea). You can enjoy drinks on the beautiful terrace, eat some delicious food, and enjoy the three bands in an intimate setting. Be there, or be square!

Uruguayo New Yorker Juan Wauters returns to his native land of South America to visit one of his favorite cities – Buenos Aires!  He will be playing some of his classic tunes as well as some exclusive sneak previews of his upcoming album La Onda de Juan Pablo, which is set to be released in January of 2019. This album, entirely in Spanish, was recorded in Juan’s portable analog studio during an intense Latin American tour which brought him through Argentina, Uruguay, Chile, Peru, Mexico, and Puerto Rico.

“SABADUKI, SKEREEEEEEE!!!” You know what that means! (Actually, do you?) It means that this Saturday, everything is going to crap, Buenos Aires is going up in flames, and the world ends in Villa Crespo. On this lovely evening, music will be unleashed in the form of Segurola y Habana, returning to the neighborhood to go hard, screw around, fuck shit up, make lots of noise and give love to those who deserve it; Boreal, nutrient-rich math rock, good any time and a necessary part of your daily diet; and ¡Shorts!, math rock cringe-lords, who are ready to retake the field after recently recovering from a hospitalization caused by a severe case of LIGMA.

BPM Disco’s very own Penny Peligro continues presenting her recently-released debut full-length album Selfies desde el Patrullero this Saturday at El Arenal, in acoustic band format, and singer-songwriters BILOBA and Sarah Connor will be joining in on the fun.